Summer Scholar Explores the Use of Fibers to Purify Water 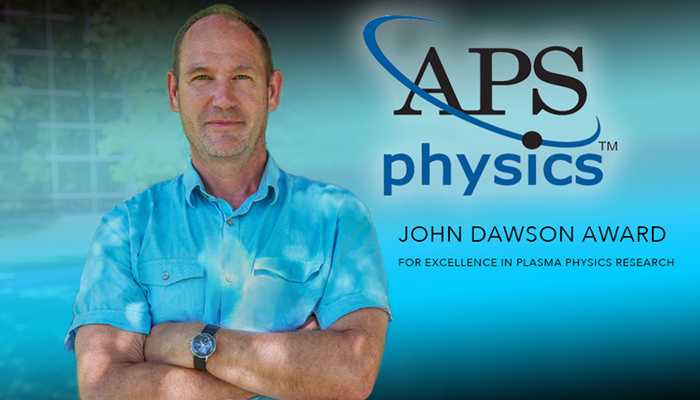 The annual award recognizes a specific outstanding achievement in plasma physics research. MacKinnon was cited by the APS “for pioneering use of proton radiography to reveal new aspects of flows, instabilities and fields in high energy density plasmas.”

“Proton probing is a powerful technique for characterizing high energy density (HED) plasmas,” MacKinnon said. “The discovery of picosecond-duration laser-produced protons by the Nova Petawatt team in late 1999 (the Nova Laser was NIF’s predecessor) opened up the possibility to use protons as a tool to characterize electric and magnetic fields in plasmas that are evolving over picosecond (quadrillionth of a second) timescales. The popularity of this technique has grown tremendously since the first experiments around 2000 and is continuing to provide insight into transient fields in a variety of hot, dense plasmas.

“I feel very honored to receive this award,” he added, “and would like to thank all my collaborators from LLNL and other institutions around the world that have helped to develop this technique into such a useful tool.”

Along with MacKinnon, the award also recognizes frequent NIF collaborators Chikang Li, Richard Petrasso, and Fredrick Seguin of the Massachusetts Institute of Technology; Marco Borghesi of Queen’s University, Belfast; and Oswald Willi of the University of Dusseldorf.

MacKinnon received his bachelor’s degree in physics with laser science from Heriot Watt University, Edinburgh, in 1988. From 1989 to 1991, he was a scientific officer at the Atomic Weapons Establishment in the United Kingdom, working on the development of high-power neodymium:glass lasers. In 1991, he joined the plasma physics group at Imperial College, London, to study high-power laser-plasma interactions and was awarded his PhD in plasma physics from Imperial College in 1996.

From 1996 to 1999, he was a postdoctoral researcher at Imperial College, studying relativistic self-focusing and magnetic field generation in laser-produced plasmas, using the Vulcan laser at the Central Laser Facility at the UK’s Rutherford Appleton Laboratory.

In 1999, MacKinnon joined LLNL as an experimental physicist, studying the production and application of laser-driven high-energy ions and the creation of HED plasmas by laser- and x-ray-driven implosions. In 2015, he became the department head for the Matter in Extreme Conditions station at the Linac Coherent Light Source at the SLAC National Accelerator Laboratory, supporting HED experiments using high-power optical lasers and extremely bright x-ray lasers.

In 2017, MacKinnon returned to LLNL to take up a section leader post with the HED Science organization at NIF. He is a fellow of the American Physical Society, was awarded a visiting research fellowship at the Queens University, Belfast, in 2003-05, and was a visiting professor at the University of Strathclyde, Glasgow, from 2012-15.

The global spotlight was on NIF & Photon Science physicist Tammy Ma when she took the stage at the World Economic Forum (WEF)’s Annual Meeting of the New Champions, held last month in Dalian, China. 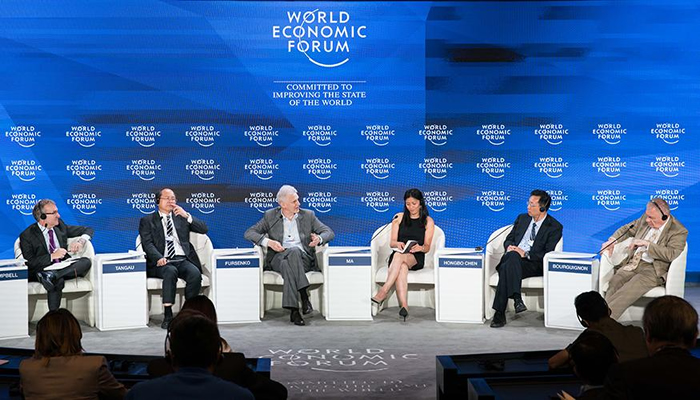 The theme of this year’s meeting was “Achieving Inclusive Growth in the Fourth Industrial Revolution,” and focused on collaboration in innovation, entrepreneurship, science and technology to reach this goal. More than 2,000 people in business, government, media and academia, representing more than 90 countries, attend the summit each year.

Ma was one of 55 scientists from around the world that were invited to attend as part of the Young Scientists Class of 2017, honoring researchers under the age of 40 in recognition of their groundbreaking work in different scientific fields. According to the WEF, “these individuals have demonstrated their commitment to public service and actively play a transformational role in integrating scientific knowledge into society for the public good.”

The 2017 class is made up of scientists from 18 countries and nearly 40 research and academic institutions. During the cohort’s two-year term, the WEF offers support through its academic and expert networks as well as engagement opportunities with its projects and initiatives. 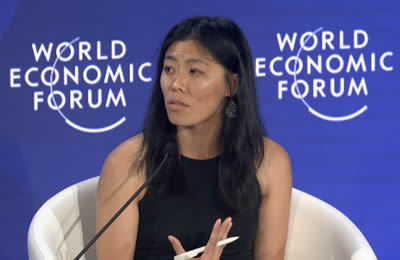 “It was an enormous honor to be among so many international leaders and experts, and to get the chance to interact and learn from them,” Ma said. “I was inspired by all the great conversations—not just among scientists, but with business leaders and politicians—centered around emerging technologies, the benefits—and challenges—they bring and very timely topics like rebuilding trust in science.”

In addition, Ma participated in a panel discussion, “Science With(out) Borders,” which addressed how the global scientific community should collaborate in the wake of geopolitical tensions. Other members of the panel were Wilfred Madius Tangau, Malaysia’s minister of Science, Technology and Innovation; Nick Campbell, executive editor and executive vice-president, Global Institutional Partnerships, Nature; Jean-Pierre Bourguignon, president of the European Research Council; Hongbo Chen, vice dean of Tsinghua University’s Tuspark Research Institute for Innovation; and Andrei Fursenko, former minister of Education and Science for Russia and current aide to the president.

Ma is an experimental plasma physicist in inertial confinement fusion and high energy density physics. She earned her bachelor’s degree in aerospace engineering from Caltech in 2005, and received her master’s degree in 2008 and PhD in 2010, both from the University of California, San Diego. Following graduate school, she completed a postdoc at LLNL before becoming a staff scientist in 2012.

Ma currently serves as the X-Ray Analysis Group lead for LLNL’s Inertial Confinement Fusion Program, and leads several fusion experimental campaigns fielded on NIF. She has authored or co-authored more than 130 peer-reviewed journal papers and has been recognized with the Stix Award for Outstanding Early Career Contributions to Plasma Research by the American Physical Society and with the Presidential Early Career Award for Science and Engineering, the highest honor bestowed by the U.S. government on science and engineering professionals in the early stages of their independent research careers.

Summer Scholar Explores the Use of Fibers to Purify Water

It all started for Mariana Lanzarini-Lopes as an undergraduate, cracking coconuts in the West Indies, seeing the effects of dysentery while working in a hospital in Africa, and engineering a solar-powered refrigerator to keep medicine safe in Indian villages.

This was the path that led the doctoral student in environmental engineering to join the fight to solve one of the planet’s greatest problems—sustainability of clean water. And it brought her to the NIF and Photon Science Directorate as a NIF & PS Summer Scholar, where she is seeking a new high-tech solution to the problem through the use of optical fibers for water purification. 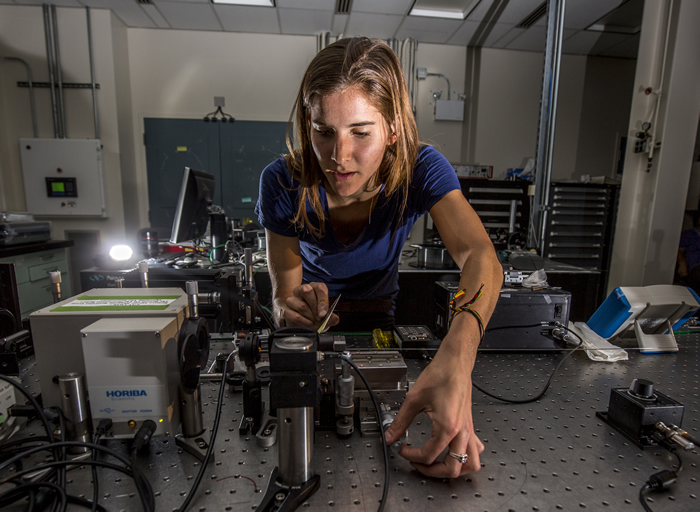 Her purified-water concept is quite practical, in Lopes’ view: “Think of a basic stream you drink directly from,” she explains. “You seek the shallow end, because that gets the most sunlight,” which helps to disinfect the water.

Her project builds on the sunlit-stream principal by shining ultraviolet (UV) light on contaminated water through a thin strip of silica fiber optic about one meter long. The light excites photocatalysts for nitrate and organics removal and inactivates bacteria and viruses, purifying the water. 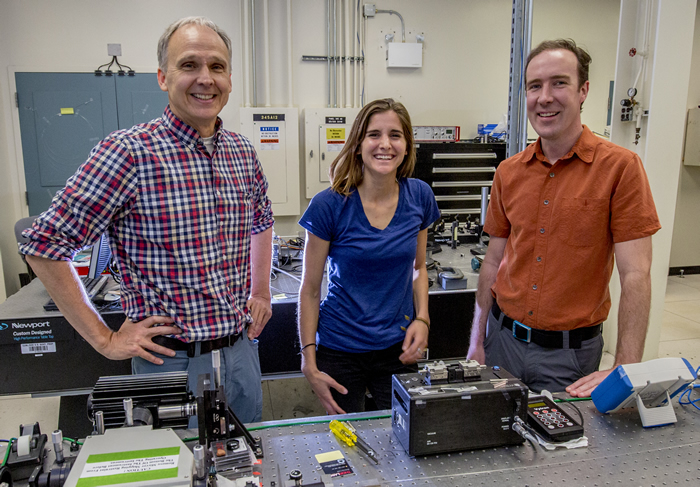 “My summer goal is better UV emissivity along the length of the fiber,” Lanzarini-Lopes says. She will coat the fiber with special water-resistant chemicals, including titanium dioxide, to test how bacteria react and ensure that water purification occurs after light treatment. “I don’t want anything to have UV absorption except my titanium dioxide or bacteria that I’m treating,” she says.

Lanzarini-Lopes’ passion for clean-water research was born while pursuing her chemical engineering degree from the University of Dayton. Her family had settled in Ohio after leaving her native Sao Paolo, Brazil, when she was in middle school. At Dayton she earned summer internships in Zambia in southern Africa, teaching physics and working at a hospital where she saw first-hand the toll of water-borne disease, especially on children.

In an ancient region of India on the Ganges River, in the east-central city of Patna, Bihar, she worked on a university-sponsored solar-powered refrigeration project. And on the West Indies island of Dominica, she engineered better processing for coconut-oil production. While all her stays were in modest quarters, what mostly struck her was the contrast in the quality of life for the people around her: it wasn’t the terrain, or the lifestyle, or the climate, but the water quality that made the difference.

“I lived in these areas where people didn’t have a lot,” she says, “yet their quality of life was so much better in Dominica because they had pure water to drink, to grow food in, and play in. They understood that, and it mattered to them.” She realized the impact clean water could make on a large scale, and set out to make water quality her life’s work. 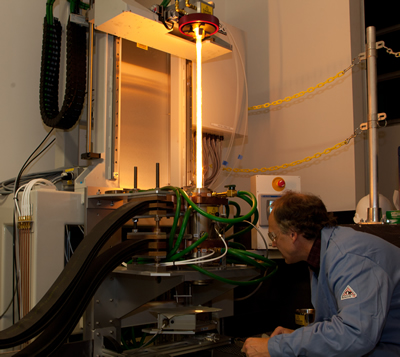 Lanzarini-Lopes’ project this summer is to characterize the fibers drawn from the Lab’s fiber draw tower, which can fabricate customized fiber with pure silica of varying degrees of porosity, depending on the scale and diameter needed. It’s the next step toward proof of principal in her personal research. Once back in her lab at Arizona State, where she has built a larger-scale testing container, she will use the fibers to process ultraviolet light to purify water; the results from her Livermore research will help with her doctoral dissertation.

While her passion has been sustainability, and she has devoted all her summers to pursuing internships to further that cause, Lanzarini-Lopes does admit to spending some downtime playing ultimate Frisbee—a sport played by teams of seven on soccer-sized fields. While the game may have been born in the counterculture days, she takes her fun seriously, playing for Rubix, a competitive Phoenix traveling team.

After completing her PhD, Lanzarini-Lopes plans to get a job to gain experience—internationally if possible, as she speaks Portuguese and Spanish in addition to English—and she has strong interest in the field of electrochemistry for water treatment. And as for the future? “I might go into teaching eventually,” she muses. “When I’m older.”

Baker (R-Dublin) issued the resolution honoring Goddu during a ceremony at Las Positas College, where Goddu, a U.S. Marine Corps veteran, recently received her associate of science degree in engineering technology. Baker said Goddu stood out among veterans in the area not only for her distinguished military service, but also for her work with other student veterans at Las Positas. She served as president of the school’s Student Veteran’s Organization and volunteered in the Veterans Resource Center, which supports returned veterans in the classroom and helps connect them with their benefits. 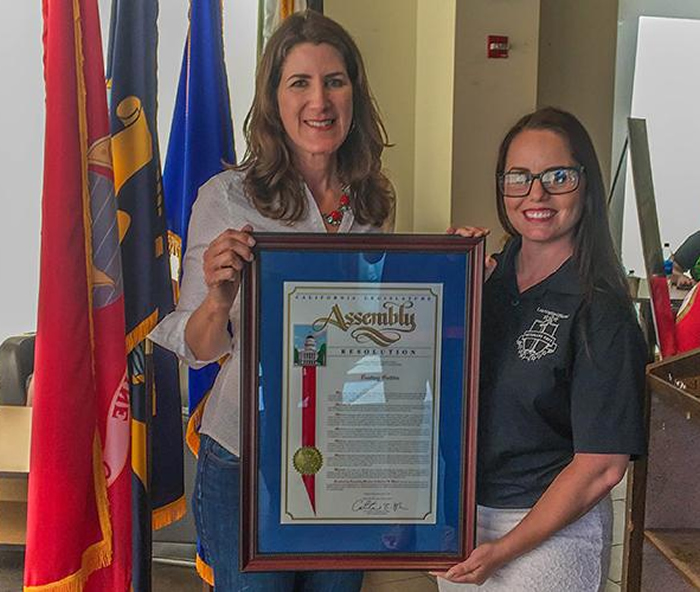 “Every Assembly member has the opportunity to select one individual in the district as the Veteran of the Year,” Baker said. “This year (Destiny’s) name came to me many times from many people, and made it very easy for me because I’ve had the opportunity to see the impact she has made on this campus with other veterans’ lives.”

Goddu, who works part-time as a mechanical engineering technician at NIF, was a sergeant in the Marines and earned her degree through the Veterans to Technology program, a collaboration between the Lab, Las Positas College and the Alameda County Workforce Investment Board. She’s also a strong advocate for funding of veterans’ resource centers at colleges throughout the state, making visits to Sacramento and Washington, D.C., to speak with lawmakers.

“It’s incredible,” Goddu said of the award. “I’m just extremely grateful to be honored and so happy that everyone could be here to share this experience, especially the past recipients. It really meant a lot.”

Along with the Veteran of the Year recognition, Goddu has received 11 scholarships this year, including a $10,000 scholarship award from the Valley Veterans Foundation. She is currently working on finishing up her transfer requirements to attend a four-year college and obtain a master’s degree in electrical engineering, with a preference for UC Berkeley. She plans to continue working at LLNL while she goes to school full-time.

“With Destiny, if she needs to go to D.C. or something, she’s there,” Steffan said. “She figures out a way to do it and still maintain her grades. Even though she’s working at the Lab and taking all these classes, when we had to get student vets to go to Sacramento, she was one of the first ones to volunteer. It’s been very rare where she’s said, ‘I can’t go.’ She’s well deserving of the recognition.”