Driven to Serve Her Country

Growing up in a family with a deeply ingrained connection to the U.S. military, NIF & Photon Science Summer Scholar Ariadna (Aria) Dang knew that serving her country could be her destiny. A midshipman at the U.S. Naval Academy, Dang is among more than 600 students from universities nationwide and around the world, including 48 in NIF & Photon Science, engaged in work-study employment opportunities at LLNL during the summer academic break. 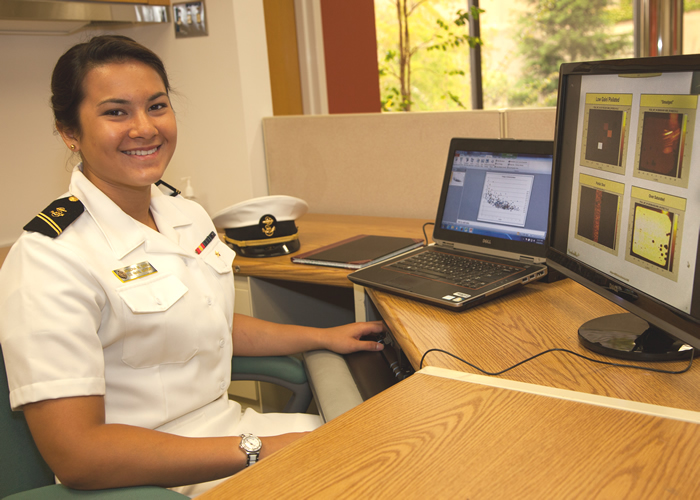 Born in Walnut Creek, California, Dang grew up in Livermore and attended Livermore High School, graduating in 2013. Now a junior at the Naval Academy, she says her fondness for military service began when she became aware of how the military saved her family.

Her grandfather served in the high ranks of the South Vietnamese military during the Vietnam War, and her father, Hung Taylor Dang, and his family became refugees during the turmoil when Saigon fell on April 30, 1975. They were brought to safety and granted citizenship, and they moved to Virginia and later to Fremont, California. It was her father’s gratitude for the U.S. military’s role in saving his family that fueled Dang’s inspiration and drive to serve her country.

In a five-week trip to Vietnam and Singapore before her senior year in high school, Dang saw where her father was from and how the family lived. She also learned about her family’s history, which she described as “eye-opening” and which became pivotal in her choice of careers. Ultimately, she said, “This is why I am here.”

Her mother was born in New York and later moved to the Bay Area. With a love for the sciences, she graduated from UC Berkeley with a graduate degree in geomorphology, studying how the Earth changes over time.

“There are more opportunities for females in the Navy.”

Asked why she chose the Navy, Dang said, “I love the water, and there are more opportunities for females in the Navy.” But with her mother’s love for the sciences, the decision wasn’t always clear to her. She kept her options open by applying to various UC campuses and other universities across the nation. Ultimately, it came down to a choice between UC Berkeley, her parents’ alma mater, and the Naval Academy. She decided on the Naval Academy and hasn’t looked back. With a major in operations research, she will earn a bachelor’s degree after completing four years at the Academy.

Dang became aware of Lab internships when she attended a briefing at the Academy about summer opportunities at LLNL and Los Alamos and Sandia national laboratories. “You can look at projects, contact researchers and let them know you are interested,” she said. “The Academy is good about communicating information about internships and providing e-mail updates about upcoming speakers and other activities. There is a tight link with the national laboratories, so they (the Navy) are informed about what is going on at the labs.”

A month after inquiring about an internship at the Lab, she was contacted by NIF & Photon Science Summer Scholar Coordinator Zhi Liao, who thought her skills would be a perfect fit for his specific project. Her assignment includes analyzing NIF beam quality in order to help predict laser-induced optics damage. She is finding a strong correlation between the energy level of a shot and the beam contrast, which is a measure of beam quality.

Dang feels her internship is a good match with her math and military background. She has learned about weapons development and research and how it affects the equipment she will be operating in the Navy. And her project will help her in her major, using MATLAB, Excel spreadsheets, and statistics. “I’m learning a lot,” she said.

“Females can now be on subs,” she said, and there are “more opportunities for females in cyber, intelligence, piloting—and the Navy is expanding and growing.” She noted that there is a constant need for very detailed and technical work in the military, and that women can perform well in these areas. She feels her internship is helping prepare her for such challenges.

“I never pick the easy
way of doing anything.”

Despite the growing opportunities for women in the military, only 22 percent of the Academy’s midshipmen are females. Dang acknowledged the difficulties of coping in a male-dominated culture, but added, “There are lots of amazing female role models at the Academy.” She serves on the board of the Academy’s Women’s Network, which provides a support system to help prepare female midshipmen for the fleet.

“I am okay with not choosing a field surrounded by many women and overcoming adversity,” she said. “I never pick the easy way of doing anything.”

Dang has yet to decide what she would like to do once she completes her studies, but among the “exciting opportunities” available to her are surface warfare officer on a ship, submarine officer, Navy pilot, or even an officer in the Marine Corps.

Another passion dear to Dang is the cello, which she has played since she was four years old. She attributes her musical talents to her mother, who has a fondness for music and the arts, and her father, who played the piano back in Vietnam. She played in a string quartet in high school and started a quartet at the Academy to connect with other musicians and to “just have fun.”

Massachusetts Institute of Technology (MIT) graduate student Alex Zylstra recently defended his thesis as part of the NIF PhD thesis program. Zylstra is the fourth member of the MIT Plasma Science and Fusion Center’s High Energy Density (HED) Physics Division, along with Hans Rinderknecht, Mike Rosenberg, and Dan Casey, to earn his PhD while working for NIF and the OMEGA Laser Facility at the University of Rochester (see “NIF-MIT Partnership Mints New PhDs”). 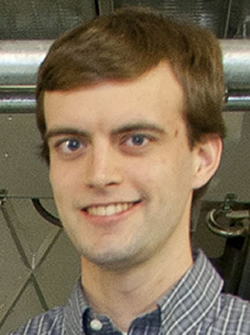 Rich Petrasso, who heads the HED Physics Division, said Zylstra “did an outstanding job at his defense.” Petrasso expressed thanks to “all of our NIF colleagues and friends who worked closely with Alex in helping him to implement experiments and to obtain excellent NIF data that, along with outstanding OMEGA data, formed the foundation of his PhD.”

Zylstra was one of four MIT students—along with Rinderknecht (a 2015 LLNL Lawrence Fellow), Rosenberg, and Hong Sio—who played an important role in the March 12, 2013, NIF experiment in which a record DD fusion yield was achieved. They were part of the team responsible for fielding nuclear spectrometers that revealed critical internal plasma conditions of the implosion.

Zylstra, who has accepted a Reines Postdoctoral Fellowship at Los Alamos National Laboratory, also was lead author of a Physics of Plasmas paper published last November titled, “The effect of shock dynamics on compressibility of ignition-scale National Ignition Facility Implosions.”

“This is a very exciting time for all of us, especially for the newer students, to be involved in the NIF program as we work toward ignition and outstanding HED science achievable at the NIF,” Petrasso said.