Next in a series chronicling the development and mission of the LLNL/NASA “MiniCarb” satellite.

LLNL’s Space Science and Security Program had a banner month in December as the program sent the Lab’s first in-house designed and fabricated CubeSat into orbit. The satellite’s optics are based on technology with origins tracing to the optical expertise that went into the creation of NIF (see “NIF and the Rise of LLNL’s Nanosatellites”). 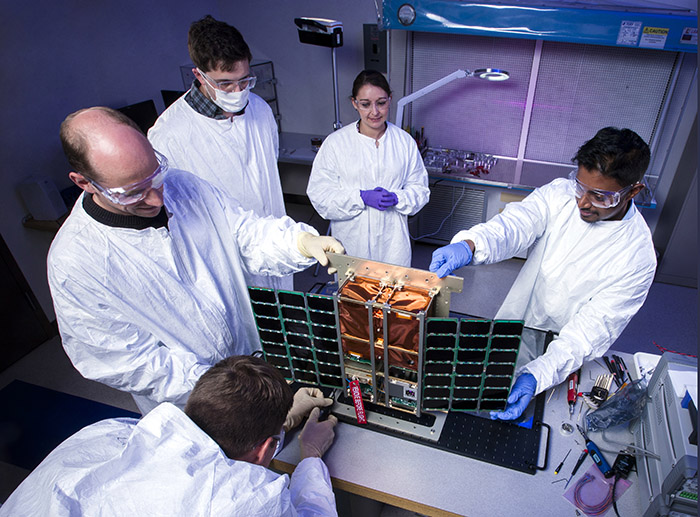 The Lab satellite was sent into orbit from Space Launch Complex 40 at Cape Canaveral Air Force Station in Florida on Dec. 5 aboard a SpaceX Dragon capsule atop a two-stage Falcon 9 rocket.

After the launch, the first stage of the Falcon 9 landed safely on SpaceX’s “Of Course I Still Love You” recovery barge, 345 nautical miles downrange from the launch pad. 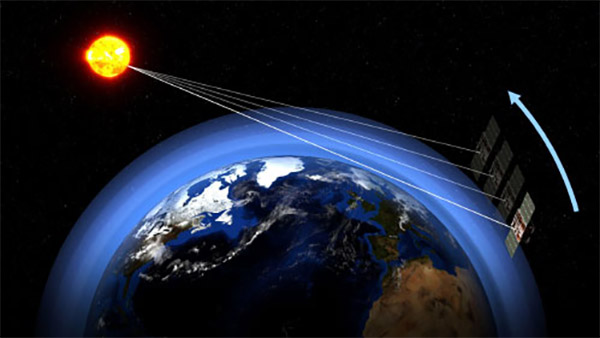 Artist’s rendering shows the direct line of sight between the Sun and MiniCarb, which will be used to monitor atmospheric gases. Credit: Jacob Long (Click to enlarge)

SpaceX, which has a commercial contract with NASA to resupply the International Space Station (ISS), carried up supplies for astronauts, as well as several secondary payloads, including the LLNL/NASA Goddard Space Flight Center CubeSat dubbed “MiniCarb.”

MiniCarb is a climate science mission to more accurately detect and measure the amounts of greenhouse gases, such as methane and carbon dioxide, in the atmosphere (MiniCarb was the focus of a cover story in the April 2019 issue of LLNL’s Science & Technology Review).

The Dragon capsule docked with the ISS on Dec. 7 and the space station astronauts have moved MiniCarb, other mission payloads and their “slingshot deployer” over to the SS Alan Bean, Northrop Grumman (NG)’s Cygnus capsule already docked at the station. The spacecraft is named after the Apollo astronaut who was the fourth American to walk on the moon.

The Alan Bean was launched on the NG-12 mission from NASA Wallops atop an NG Antares rocket on Nov. 2.

On Jan. 13, MiniCarb was deployed to its 500-kilometer-high mission orbit (about 310 miles of altitude) to begin its science mission.

“Since the 1960s, LLNL scientists and engineers have built many instruments that have been deployed in space on a wide variety of missions for NASA, the U.S. Department of Defense and other government agencies. But MiniCarb is the first LLNL-led mission, where we were responsible for building the satellite bus and overall spacecraft integration,” said Bill Bruner, a senior adviser for the Space Science and Security Program.

“We will receive scientific data here at the Lab from the satellite,” Bruner said, “and provide it to the scientific principal investigator at NASA Goddard.”

“We’re very pleased that the Livermore space program successfully launched this mission in December,” added Mike Pivovaroff, leader of the Space Science and Security Program. “In the next few months, another important LLNL mission will be launched into space. This is a sign that the LLNL space program has arrived.”

The Space Science and Security Program was stood up in 2016 to manage and coordinate the Lab’s growing activities in space; it is aligned with and supported by the Laboratory Director’s initiative in space science and security.