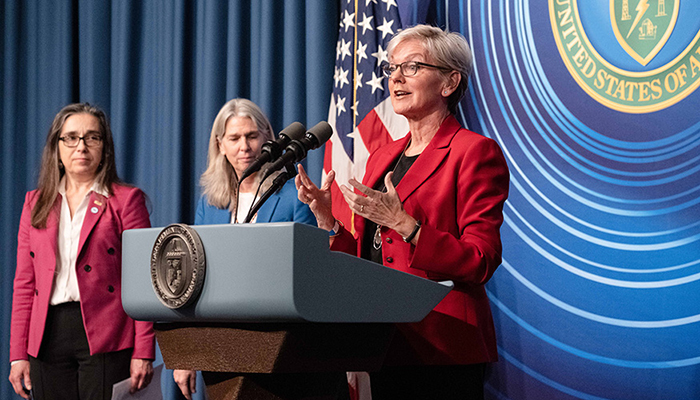 Call it the shot heard ‘round the world.

NIF’s monumental, first-ever demonstration of fusion ignition marks a breakthrough for fusion energy and an initial step in a decades-long quest for clean energy, according to U.S. government officials and LLNL scientists.

At a Dec. 13 press conference, officials with U.S. Department of Energy (DOE), White House Office of Science and Technology Policy (OSTP), National Nuclear Security Administration (NNSA) and LLNL announced that an experiment at NIF—just after 1 a.m. on Dec. 5—reached ignition, producing more energy from the self-sustaining fusion reaction than was put in to create the reaction.

The achievement was celebrated as the culmination of 60 years of exploration and experimentation in inertial confinement fusion (ICF) by generations of scientists at LLNL and collaborators around the world in industry, academia, and other DOE national labs, including Los Alamos and Sandia. Officials from DOE and the OSTP congratulated researchers on the milestone and said replicating ignition in NIF—the world’s largest and most energetic laser—could set the stage for fusion to become a viable clean-energy option.

“Last week, at the Lawrence Livermore National Laboratory in California, scientists at the National Ignition Facility achieved fusion ignition—creating more energy from fusion reactions than the energy used to start the process,” DOE Secretary Jennifer M. Granholm said at the press conference at DOE headquarters in Washington, D.C. “It's the first time it has ever been done in a laboratory anywhere in the world—simply put, this is one of the most impressive scientific feats of the 21st century.”

Granholm said the accomplishment will strengthen national security and will move the world closer to the possibility of an abundant, carbon-free energy source for the future.

“It would be like adding a power drill to our toolbox for building a clean-energy economy,” Granholm said. “Today, we tell the world: America has achieved a tremendous scientific breakthrough—one that happened because we invested in our national labs and fundamental research. And tomorrow, we will continue to work toward a future powered in part by fusion energy.”

In 2022, DOE unveiled a 10-year strategy for developing commercial fusion energy that included a $50 million funding opportunity to support design of a pilot magnetic fusion plant. Granholm said experts are peer-reviewing applications and may have a decision in early 2023.

Following Granholm’s announcement, OSTP Director Arati Prabhakar described her experience as a summer student on fusion research at LLNL in the 1970s, and congratulated generations of scientists for overcoming decades of struggles and setbacks.

“They never lost sight of this goaI and I think this is such a tremendous example of what perseverance really can achieve,” Prabhakar said. “It took so many different kinds of advances that ultimately came together to the point that we could replicate that fusion activity in this controllable way in a laboratory …. The prospect (of fusion energy) now is one step closer in a really exciting way. This is an amazing example of the power of America's research and development enterprise.” 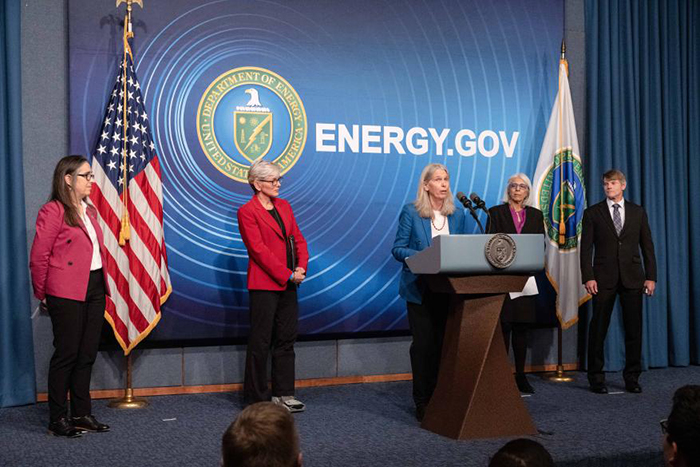 “Unlocking ignition at NIF will allow us to probe the extreme conditions found at the center of nuclear explosions and address significant longstanding stewardship questions,” Hruby said. “The unprecedented nature of reaching ignition confirms what I and previous administrators of the NNSA have been saying for decades: There is no more dedicated or more talented group of scientists in the world. The tireless efforts of thousands of people from around the national security enterprise, and their predecessors, are responsible for this breakthrough.”

The press conference concluded with remarks from Budil, who said the pursuit of fusion has been an “incredibly ambitious goal” at the Lab, requiring the contributions of thousands of scientists over the years, including noted fusion pioneer and former LLNL Director John Nuckolls. 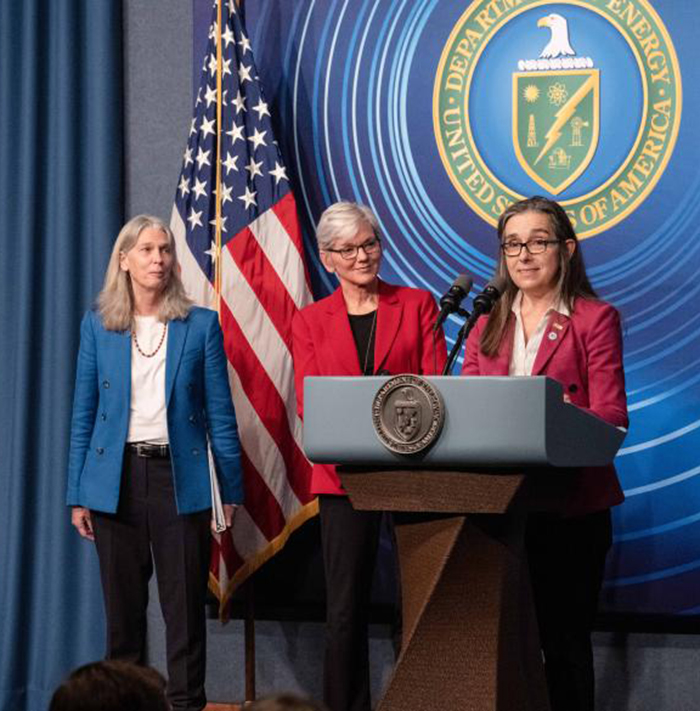 LLNL Director Kim Budil discusses the pursuit of fusion on NIF and the prospects for a fusion energy future at the DOE press conference. Credit: DOE

Budil said ignition would not have been possible without a “long-term commitment of public investment in fusion science” and will serve to advance national security, demonstrate continued U.S. leadership in science and technology, and generate “tremendous excitement in the fusion community,” particularly in the private sector.

“The science and technology challenges on the path to fusion energy are daunting but making the seemingly impossible possible is when we’re at our very best,” Budil said. “Ignition is a first step—a truly monumental one that sets the stage for a transformational decade in high energy density science and fusion research—and I cannot wait to see where it takes us.”

Budil cautioned there are still “significant hurdles” and engineering challenges to solve before the commercialization of fusion energy becomes a reality, such as the ability to reproduce ignition many times per minute and making fusion reactions simpler and more efficient.

“I think it’s moving into the foreground and, probably with concerted effort and investment, a few decades of research on the underlying technologies could put us in a position to build a power plant,” Budil said.

A New Chapter for Fusion Energy

Following the press conference, a panel of NIF scientists described details of the achievement and what ignition might mean for the future of fusion energy. NIF’s Program Director for Weapon Physics and Design Mark Herrmann moderated the panel, providing an overview of NIF and a play-by-play of the historic shot.

Herrmann said on Dec. 5, NIF scientists performed a NIF shot as they always do—by firing the facility’s 192 powerful lasers onto a BB-sized target of deuterium and tritium (DT), heavier isotopes of hydrogen. However, in this experiment, the laser energy was increased to 2.05 MJ, and conditions of implosion symmetry, heat, and compression were just right, generating the record-breaking energy output of 3.15 MJ. 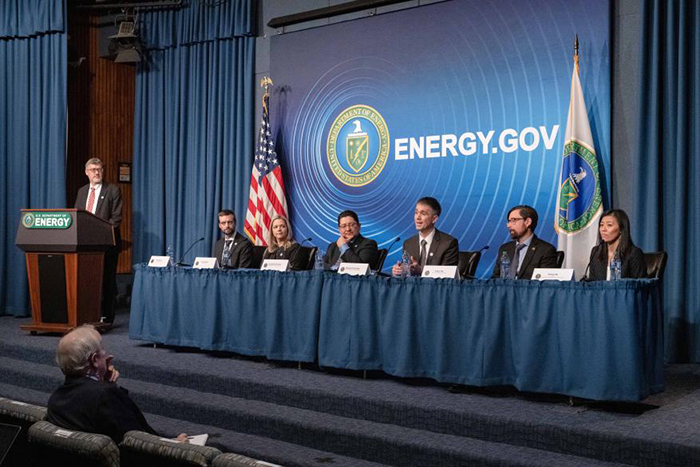 “There’s a race between heating and cooling and if that plasma gets a little bit hotter, the fusion reaction rate goes up, creating even more fusions, which gets even more hot. So the question is, ‘Can we win the race?’ ” Hermann said. “For many decades, we lost the race, and we got more cooling out than we got the heating up, so we didn't get to this ignition event. But last Monday, that all changed, and we able were able to win the race and get very significant heating of the fusion plasma up to very high temperatures.”

The ignition milestone occurred a little more than a year after NIF reached a then-record-setting 1.35 megajoule shot on Aug. 8, 2021, which produced about 70 percent of the energy put into the experiment via fusion reaction (see “Reaching the Threshold of Ignition”).

Annie Kritcher, team lead for Integrated Modeling and the principal designer for the experiment, said the shot was part of a new NIF campaign that began in September 2022, when the team introduced a new laser capability and a thicker capsule for the fusion fuel, providing more margin for achieving ignition. The team also made changes to improve implosion symmetry, which were fed to a cognitive simulation design team that determined there was high probability of a “yield gain of at least one,” Kritcher said.

Given the recent advancements and promising models, team members said they had “high hopes” and “good reasons to be optimistic” that the Dec. 5 shot would be extraordinary.

Arthur Pak, team lead for stagnation science, said the team confirmed the net energy yield using multiple independent diagnostics to measure the number of neutrons that escaped the reaction, including radioactive decay and a magnetic spectrometer, giving them “high confidence” in the results.

Pak credited the breakthrough to the “tireless work of technicians and operators” that make observations of fusion plasma with improved diagnostics.

Jean-Michel Di Nicola, chief engineer for the NIF laser system, said the team stood “on the shoulders of multiple generations of optical, material, and laser physicists who have designed and optimized ever-increasing performance in terms of laser delivery.”

“All that work led up to a moment just after 1 a.m. last Monday when we took a shot, and as the data started to come in, we saw the first indications that we'd produced more fusion energy from the laser inputs,” Zylstra said.

Tammy Ma, who leads LLNL’s Inertial Fusion Energy (IFE) Institutional Initiative, said ignition “lays the groundwork” for the feasibility of inertial fusion energy and creates a roadmap for reaching even higher energy gains and, potentially, a pathway to pilot commercial fusion plants in the coming decades.

“Developing an economically attractive approach to fusion energy is a grand scientific and engineering challenge—without a doubt, it will be a monumental undertaking,” Ma said. “However, the potential benefits are enormous; clean, carbon-free, abundant reliable energy capable of meeting the world's energy demands, and furthermore, providing for the energy sovereignty and energy security of the U.S.”

Ma said that an upcoming DOE Office of Fusion Energy report will set the framework for a new IFE program in the United States, which is currently at a “divergent point” where more investments are needed to make the technology simpler and more efficient, and to determine the best design for fusion energy.

“Such a program will inevitably require participation from across the community, both the public sector but the private sector as well,” Ma said. “We look forward to working with the Department of Energy to leverage and capitalize on these great results for a fusion energy future. The time is now.”

As impressive as the ignition accomplishment is, researchers said they already have their sights set on future improvements for fusion experiments at NIF. Next summer, Di Nicola said, the team will design experiments and field shots with additional laser energy, providing them with more margins for ignition, and, with more investments, could produce even larger target gains.

Target Fabrication Program Manager Michael Stadermann added that the target capsule used in the ignition shot had flaws, which was “very encouraging” for the team.

“This gives us confidence that we can make shells of equal quality and better quality in the future, and that we’ll be able to reproduce this experiment or even improve on it,” Stadermann said. 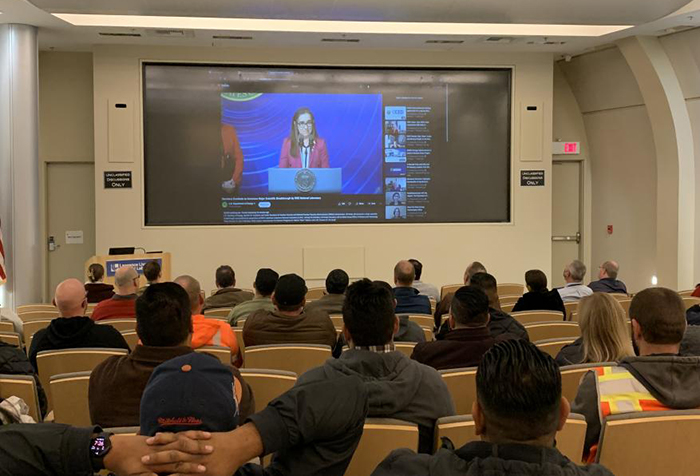 Back in Livermore, the significance of the moment was not lost on the hundreds of LLNL employees who watched the early-morning press conference as it was simulcast live in several auditoriums across the main Lab site. Many viewers expressed pride in their co-workers and in the Lab’s continuing commitment to pushing the boundaries of science.

“It was very motivating seeing scientific people at the highest level, including the White House science adviser (at the press conference),” engineer Michael Kirby said. “It shows how impactful some of the work we do is and how it can shape the movement toward renewable energy. Also, our achievements are broadcast to the nation and the world, which is not something I thought I’d ever see.”

Associate Program Leader Terri Stearman added: “There are very few moments in a generation where you have the opportunity to sit and watch science being made. This is our moonshot.”