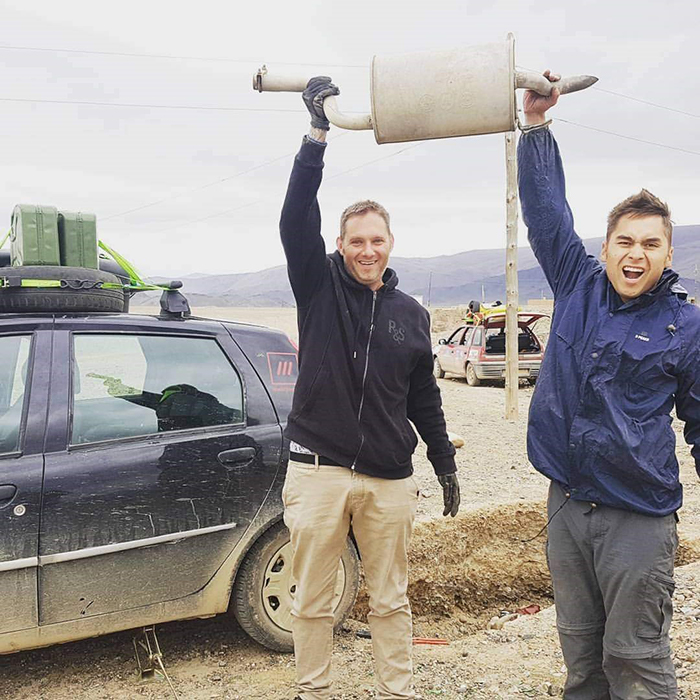 NIF&PS structural engineer Brian Berman, left, and a friend remove a troublesome muffler from their Fiat Punto in Mongolia during the 2017 Mongol Rally, a 19-nation, 15,000-mile trek that began in London and ended in Russia. Photos courtesy of Brian Berman (Click to expand. Use keyboard arrow keys to view all photos.)

When NIF&PS structural engineer Brian Berman recovered completely from an injury and illness that sidelined him for two years, he was determined to take the road less traveled—literally.

Since 2017, Berman has visited about 20 countries and traveled nearly 20,000 miles through England, Germany, Bulgaria, Azerbaijan, Kazakhstan, Turkmenistan, Mongolia, Russia, and India. He’s already packed in a lifetime of travel experiences and memories and stays in touch with friends he’s met around the world.

Berman also learned some valuable, lasting lessons along the way.

“I enjoy life more—I spend more time with my family,” says the married father of a young daughter. “It reset my priorities. It showed me what’s important—my friends, my family, my health, my mental health, enjoying the moment. It really helped me bring closure to the sickness. I left a nervous wreck and came back relaxed, with a ‘Whatever happens, we’ll be fine’ attitude.”

Berman grew up in Gilroy and still lives there. He attended Cal Poly San Luis Obispo but switched to San Jose State University when he changed majors from physics to civil engineering.

He graduated in 2002 and soon began working civil engineering jobs for Silicon Valley housing developments. But when the housing bubble burst, he was laid off. His next job was with Areva, a France-based nuclear power plant company. He worked on power plants throughout Europe and the United States, spending a year at the Savannah River Site, a nuclear reservation in South Carolina. 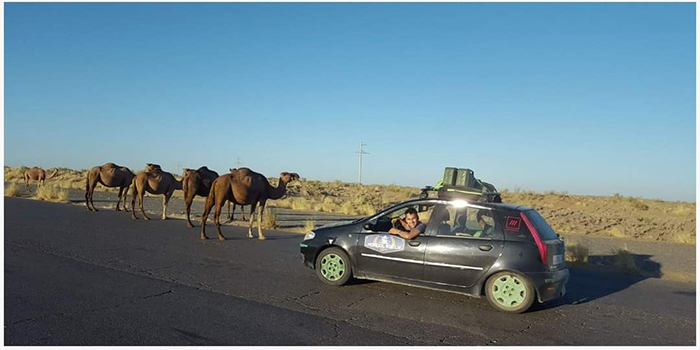 The Fiat Punto passes camels across the Karakum Desert in Turkmenistan.

In 2013, Berman was injured and became seriously ill. He was hospitalized and bedridden before making a complete recovery. He joined LLNL about five years ago.

At the Lab, Berman works on NIF&PS Directorate projects supporting multiple teams. Last year, he worked in 10 different buildings as part of a core group of Lab structural engineers. He is the responsible engineer for the rooms recently added in NIF’s Switchyard 1 for the optical Thomson scattering laser and high-resolution VISAR diagnostic systems.

“Brian is recognized for his technical expertise and experience with structural design, and he provides outstanding contributions to structural design and project efforts within NIF&PS,” says Stanley Sommer, Berman’s supervisor. “He mentors a variety of designers and engineers and actively engages with the multi-discipline teams.”

Berman has nothing but praise for the Lab, and he singles out Sommer.

“It’s the people—it really is,” he says. “I have a really diverse scope of work, but the people have confidence in me. They’re very supportive.”

The Mongol Rally route that NIF&PS engineer Brian Berman and his friends took in 2017.

After he recovered from his injury and illness, Berman thought, “I’ve got to live my life. I’m not going to live to work. I’m not going to put in 80 hours a week and killing myself for what? When a friend called and mentioned the Mongol Rally (in 2017), I said, ‘Whatever that is—yes.’ 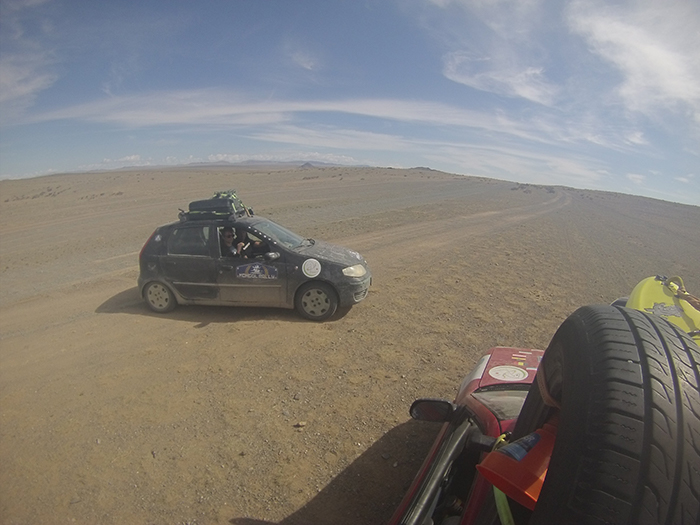 Brian Berman drives the Fiat Punto through Mongolia. This was the scene—nothing but desert—for three days during the 2017 Mongol Rally.

“I told my wife (Helen), ‘Honey, I have to do this. This is important to me.’ She understood, so I was gone for six weeks.”

The Mongol Rally is a six-week, 19-nation, 15,000-mile trek that begins in London, runs through Mongolia, and ends in Russia in “a piece of junk” car with a 1.0-litre or less engine. Berman, a friend, and the friend’s girlfriend spent nearly eight months planning the trip and sorting out visa issues.

They boarded a car ferry twice—from England to France, and from Azerbaijan to Turkmenistan across the Caspian Sea on an old Russian cargo ship.

“There’s no support, no route, no anything,” Berman says. “You get from one place to the other and it’s, ‘We’ll see you sometime whenever you get there.’ They leave the finish line open for two months and everybody gets there when they get there. 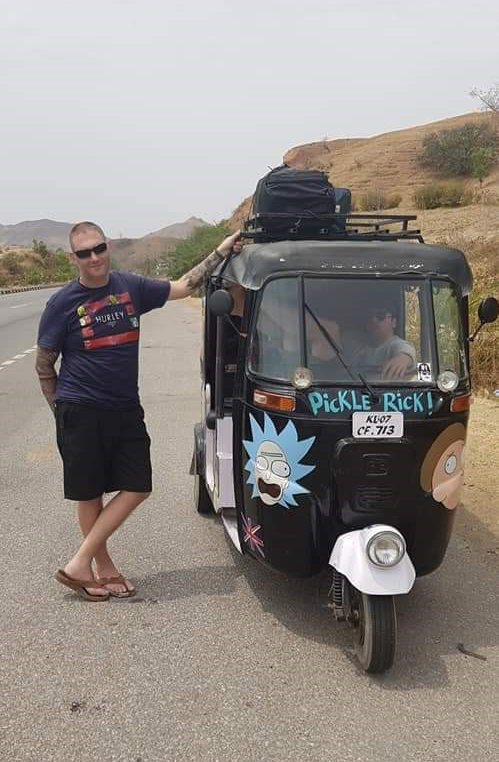 Brian Berman poses with Pickle Rick in the Thar Desert, aka the Great Indian Desert, in Rajasthan, with the rickshaw used during his two-week, 3,000-mile trip in India in 2019.

The car—a Fiat Punto, a “supermini” car—broke down nine times. “The point is that you have to break down and interact with locals,” he says.

On one occasion, the car’s bushing that connects the axle to the transmission blew out in the middle of Mongolia, spewing grease everywhere, and the Punto was towed to a gas station. Across the street from the gas station, Berman saw a giant army truck with six men in mechanic jumpsuits—Mongolian army mechanics.

Moments later, Berman and his friends were explaining the problem to the mechanics, with the help of a mobile translation app. The team of mechanics lifted the car, removed the wheel and brake, and used a grinder to mold a nut into the right shape—within 20 minutes.

“In the meantime, we’re drinking warm yak’s milk in a yurt right there,” Berman says. “The guys offer us fermented horse milk, which we had to try. It was a fun exchange, we’re taking pictures.”

When Berman and his friends offered to pay them, they replied, “No money, no money,” and instead took a gas can in exchange. 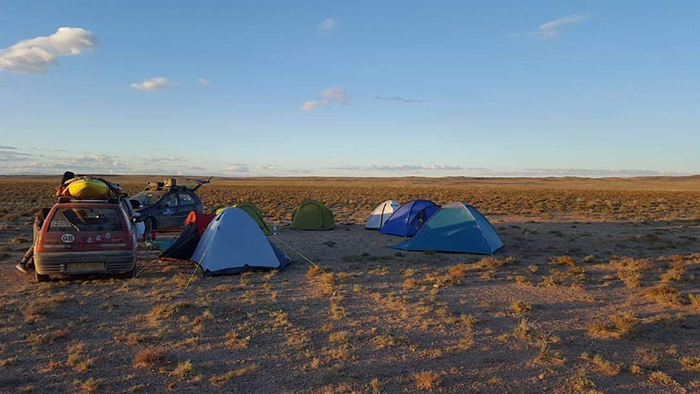 The travelers set up camp on the Mongolian Steppe, a few days drive into the country. That evening, they drank beer and played cricket while the sun set.

Berman says being thousands of miles away from home and the everyday concerns and worries gave him a feeling of total freedom and liberation. 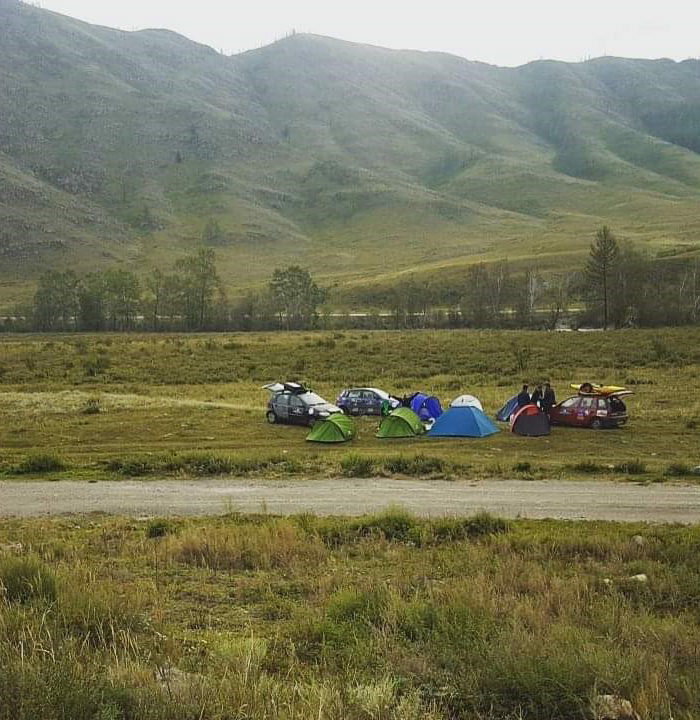 Camping in a cow pasture near the Altai Mountains in Russia, less than a day’s drive from the Mongolian border. One morning, a semi-wild dog visited the camp.

“I needed to go somewhere where I was completely cut off and truly just on my own with no links to home,” he says. “To be thinking about anything from bills to jobs. When you’re that far from home, it doesn’t make sense to think about home or to worry about something.”

In 2019, Berman and two friends went to India for another “amazing experience.” But this was no normal tourist trip. This was the Rickshaw Run, traveling from northern India to the south over two weeks and 3,000 miles on a three-wheel rickshaw with a lawnmower engine.

With the pandemic, Berman has had to put all travel plans on hold in the past year. He and a friend were planning a trip to Morocco and “we were going to drive in the desert, not the tourist spots.”

Meanwhile, Berman is saving vacation time and drafting a list of places to visit. He’s convinced his wife to visit Thailand, Vietnam, and Laos on a motorcycle. A two-week sailboat trip around the Virgin Islands is also on his growing list.