Ten experiments were awarded a total of 18 days of shot time on NIF, the world’s largest and most energetic laser. The experimental time will commence in about one year, paced largely by the preparation time required for the first shots. 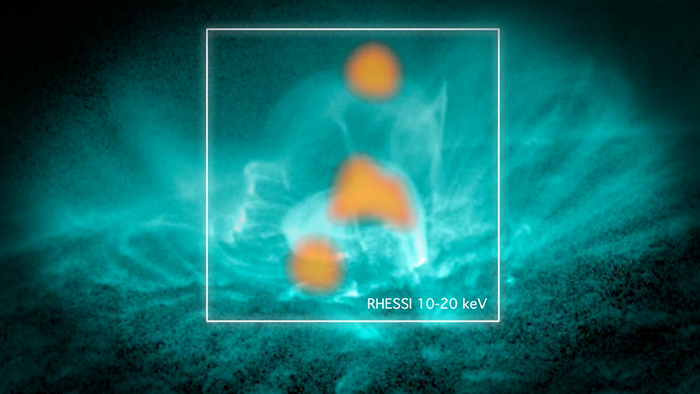 Magnetic reconnection is the topic of one upcoming DS experimental campaign. In this image, magnetic reconnection on the sun as seen by the Solar Dynamics Observatory is shown in teal, with data from the Reuven Ramaty High Energy Solar Spectroscopic Imager (RHESSI) overlaid in orange. Credit: NASA

An external review committee comprised of internationally renowned scientists picked the awardees from 25 full proposals submitted to the NIF User Office. The committee ranked the proposals based on the quality and impact of the science, the strength of their teams, and their ability to execute the project.

Discovery Science Program Leader Bruce Remington said he was impressed by all the proposals, which showed the imagination and scientific creativity of the researchers.

“There are a lot of good scientists out there with great ideas,” he said. “You just need a capable set of people who say, ‘Yes, let’s give it a try.’ ”

About 8 percent of NIF’s overall shot time is set aside for the DS program—basic science experiments that probe the makeup and inner workings of stars, planets, plasmas, and materials placed under extreme conditions of pressure, density, and velocity. The program is open to scientists and researchers from both outside and inside the Lab, nationally and internationally.

Over the years, DS has produced a wealth of benefits that have strengthened NIF’s SSP and ICF missions. And DS has produced groundbreaking results, such as demonstrating how hydrogen becomes metallic in the interiors of Jupiter, Saturn, and extra-solar planets, or how the compression of iron can provide insights into the cores and the mass-radius relation of large Earth-like exoplanets.

This new round of DS experiments brings the same exciting potential.

For example, one project called “Quantum leap on NIF through pre-compression” seeks to push the boundaries of equation of state and materials science. The proposing team of university faculty and HED scientists, led by principal investigator Raymond Jeanloz, professor of Earth and Planetary Science & Astronomy at the University of California, Berkeley, has done a series of experiments with cryogenic hydrogen and deuterium.

The project, which was awarded one shot day, seeks to add the capability to pre-compress a liquid sample of hydrogen inside a diamond anvil cell (DAC), a device that can squeeze material statically under very high pressure even before it is hit by the NIF lasers. This will allow creation of higher density hydrogen regimes, a state that will enhance the quantum effects relevant to the deep interiors of gas giant planets.

The capability has been demonstrated on the University of Rochester’s Omega laser, “but we can get to much higher pressure on NIF on a much slower time scale, which avoids generating shocks in the physics sample (hydrogen and deuterium). This allows higher densities to be reached on NIF, a requirement to enhance the quantum effects,” says Lab Senior Target Area Scientist Dan Kalantar.

Also new for NIF is another project on hydrodynamics. “Magnetized Rayleigh-Taylor morphology,” under principal investigator Mario Manuel, a scientist with San Diego’s General Atomics. This will be the first Discovery Science experiment to use external magnetic field capabilities developed on NIF for magnetic laser inertial fusion and Discovery Science.

In this experiment, which was awarded two shot days, the scientists are trying to demonstrate how the presence of a pre-imposed magnetic field alters the evolution of Rayleigh-Taylor instabilities between two density mismatched materials and possibly alters the transition to atomic mix.

The experiment is bound to interest astrophysicists, who’ve long sought magnetic field laser experiments at the Lab since the days of NIF’s predecessor (Nova) because “it’s a magnetized universe,” Remington said. “It’s been a long time coming, since the basic science experiments in 1995-1999 on the Nova laser, when the astrophysics community said very clearly that they wanted magnetic fields in these experiments.  But we are now getting to these more relevant astrophysical regimes.”

For astrophysics, “This is one of the fundamental open questions: how are the high energy cosmic rays generated? One proposed mechanism is through collisionless shocks,” Remington said.

Imagine wind blowing through a screen door, he said. The wind gets a little disrupted, but still flows through to the other side. If you replace the screen door with very low-density plasma, you’d think the same thing would happen, but plasma instabilities kick up and prevent the low-density flows from interpenetrating, thus creating stagnation and the kind of shocks seen throughout the universe.

“You see these shocks through the radiation they generate, in supernova remnants, for example, and these collisionless shocks lead to magnetic field creation by Weibel plasma instabilities. This ultimately leads to particle acceleration,” he said.

Seven of the 10 new DS experiments came from teams outside of the Lab, working with Lab liaisons and shot experimentalists. In the other three, the principle investigators come from inside the Lab, including a nuclear physics experiment named “Cross-section measurement to address the electron screening problem” from experimental physicist Alex Zylstra.

The project, allotted two shot days, is a continuation of previous experiments to measure how nuclear reaction rates can be modified by dense plasma. The challenge is in the difficulty of taking measurements at the level of precision and the plasma densities required, but the results are expected to be relevant to the high-density conditions deep in the cores of stars, Remington said.

The other awarded projects are:

Equation of State and Material Science