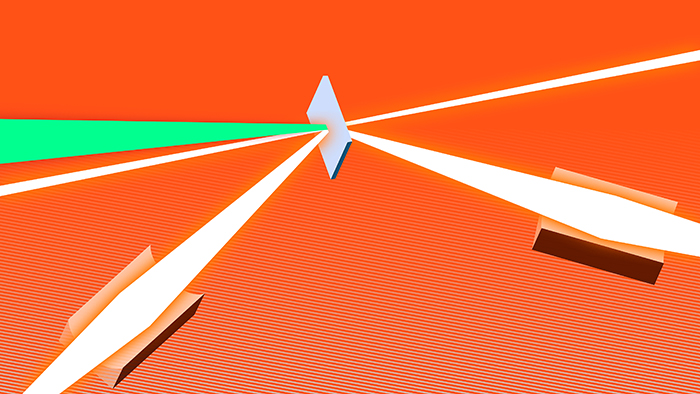 In a new experiment, four optical laser beams (green) launched a shock wave in a plastic sample made up of carbon and hydrogen. As the shock wave moved through the material, researchers observed it by hitting the shocked regions with x-ray photons from SLAC National Accelerator Laboratory’s Linac Coherent Light Source (thin white beam) that scattered both backwards and forwards off electrons in the sample (thicker white beams). Credit: Greg Stewart/SLAC

There are giants among us — gas and ice giants, to be specific. They orbit the same star, but their environmental conditions and chemical makeup are wildly different from those of Earth. These enormous planets – Jupiter, Saturn, Neptune, and Uranus — can be seen as natural laboratories for the physics of matter at extreme temperatures and pressures.

Now, an international team including researchers from Lawrence Livermore National Laboratory (LLNL) has developed a new experimental setup to measure how chemical elements behave and mix deep inside icy giants. The technique could offer insights into the formation and evolution of planetary systems. What they learn could also guide NIF scientists hoping to harness nuclear fusion, which produces conditions similar to those in our sun, as a new source of energy. Their results were recently published in Nature Communications.

In previous experiments, researchers used SLAC’s Linac Coherent Light Source (LCLS) x-ray laser to get thefirst detailed look at the creation of "warm dense matter," a superhot, super-compressed mixture believed to be at the heart of these enormous planets. They were also able to collect evidence for “diamond rain,” an exotic precipitation predicted to form from mixtures of elements deep inside icy giants.

Until now, researchers studied this using x-ray diffraction — taking a series of snapshots of how samples respond to laser-produced shock waves that mimic the extreme conditions found in other planets. This technique works well for crystal samples but is less effective for non-crystal samples whose molecules and atoms are arranged more randomly, which limits the depth of understanding scientists can reach.

In the new paper, the team used a technique called x-ray Thomson scattering that precisely reproduces previous diffraction results while also allowing them to study how elements mix in non-crystal samples at extreme conditions. The researchers hope the technique will allow them to measure the microscopic mix of materials used in fusion experiments at large, high-energy lasers such as NIF.

“We want to understand if this process could occur in inertial confinement fusion implosions with plastic ablator capsules,” said LLNL physicist Tilo Döppner, a co-author on the paper, “as it would generate fluctuations that could grow and degrade the implosion performance.”

LCLS Director Mike Dunne said the research provided data “on a phenomenon that is very difficult to model computationally: the ‘miscibility’ of two elements, or how they combine when mixed. Here they see how two elements separate, like getting mayonnaise to separate back into oil and vinegar. What they learn could offer insight into a key way fusion fails, in which the inert shell of a capsule mixes in with the fusion fuel and contaminates it so that it doesn’t burn.”

In the most recent experiment, optical laser beams launched a shock wave in a plastic sample made up of carbon and hydrogen. As the shock wave moved through the material, the researchers observed it by hitting the shocked regions with x-ray photons from LCLS that scattered both backwards and forwards off electrons in the sample.

“One set of scattered photons revealed the extreme temperatures and pressures reached in the sample, which mimic those found 10,000 kilometers beneath the surface of Uranus and Neptune,” said SLAC scientist and co-author Eric Galtier. “The other revealed how the hydrogen and carbon atoms separated in response to these conditions.”

To follow up, the team plans to recreate even more extreme conditions found deeper inside icy giants and to study samples that contain other elements to understand what happens in other planets.

“This technique will allow us to measure interesting processes that are otherwise difficult to recreate,” said Dominik Kraus, a Helmholtz-Zentrum Dresden-Rossendorf scientist who led the study.

“For example, we’ll be able to see how hydrogen and helium, elements found in the interior of gas giants like Jupiter and Saturn, mix and separate under these extreme conditions,” said Kraus, a former LLNL postdoctoral researcher. “It’s a new way to study the evolutionary history of planets and planetary systems, as well as supporting experiments toward potential future forms of energy from fusion.”