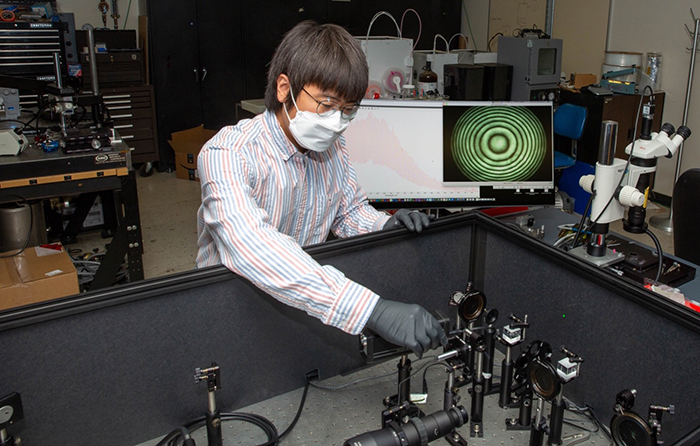 LLNL postdoc Yong-Jae Kim obtains an interference fringe spectrum and ring pattern with a white light and a laser from a diamond anvil cell sample to measure the refractive index and its dispersion in the gigapascal pressure range at the Laboratory’s HED Science Center Technology Facility. Credit: Julie Russell.

In a paper recently published by Scientific Reports, a team of Lawrence Livermore National Laboratory (LLNL) scientists describes a high-precision interferometer system, newly developed to measure the pressure dependence of the refractive index and its dispersion in diamond anvil cells (DACs).

The system could become another important diagnostic tool for experiments at the National Ignition Facility (NIF).

“Accurately measuring the index of a compressed sample in DACs is a powerful, contactless way to probe how pressure alters the electronic charge distribution and the inter-atomic/molecular distances in addition to the optical properties,” said lead author Yong-Jae Kim, a postdoctoral researcher at LLNL.

“Being able to determine the refractive index of the sample with high precision and high accuracy is critical for new experimental methods to probe matter at extremes with laser-driven compression,” said LLNL physicist Marius Millot, leader of a Laboratory Directed Research and Development (LDRD) project titled, “Unraveling the Physics and Chemistry of Water-Rich Mixtures at Extreme Pressures and Temperatures.”

“It’s fantastic to see that Yong-Jae was able to build an instrument that performs 10 times better than what we were hoping to achieve,” Millot said, “and it’s exciting because we may be able to use the instrument to support other areas. For example, we are planning to test if we can measure the optical properties of the diamond coatings in the target capsules at NIF.”

To conduct the experiments, the team designed and built an optical instrument that combines two interferometric measurements.

“We used DACs to compress samples to high pressure,” Kim said. “The diamond cells serve as an optical cavity and the reflected beams from the two sample diamond interfaces produce interferograms that encode a lot of information about the sample. Collecting a fringe spectrum in the visible range (500-700 nanometers, or nm) from a white light source and a ring pattern from a 532-nm laser, we can determine the sample thickness, the refractive index, and its dispersion simultaneously at each pressure level.”

According to Kim, several improvements in the experimental setup and the data analysis methodology, such as anti-reflection coatings on the diamonds, using a thin-enough sample and an objective lens with a high numerical aperture, enabled the researchers to achieve 10-4 random uncertainty on the refractive index, a factor of five improvement over the best previous DAC measurement.

New data on liquid water and ice VI up to 2 gigapascals (2,000 atmospheres) at room temperature illustrate how higher-precision measurements of the index and its optical dispersion open up new opportunities to reveal subtle changes in the electronic structure of water at high pressure.

Kim developed the new instrument during the first two years of his postdoc to support the research team’s LDRD project. The project focuses on laser-driven shock experiments on water-rich mixtures that are representative of the interior of icy planets like Uranus and Neptune.

Looking ahead, the researchers will use the high-precision interferometer to obtain the optical and electronic properties of various low-Z (atomic number) mixtures—for example, a hydrogen, carbon, nitrogen, oxygen mixture called “Synthetic Uranus”—in preparation for a series of laser-induced shock campaigns at the University of Rochester’s Omega Laser Facility to study the extreme chemistry and physics in the high energy density region found deep inside the icy planets.