A team from LLNL’s Advanced Photon Technologies (APT) program has designed a new generation of compressor gratings that could boost the performance of the world’s ultrafast high-power laser systems by as much as 20 percent. The new gratings also can support hundreds of kilowatts of average power—an increase of about 10,000 times compared to common industrial technologies.

Gratings are at the heart of the 2018 Nobel Prize-winning technology called chirped-pulse amplification (CPA) that enables the development of petawatt (quadrillion-watt) and even higher peak-power lasers. Used to compress laser pulses to durations below 30 femtoseconds (quadrillionths of a second), LLNL’s new multilayer dielectric (MLD) gratings can substantially enhance the diffraction efficiency of grating compressors over a large bandwidth, or range of frequencies, while absorbing 500 times less energy than previous designs (unlike the metal used in traditional gratings, dielectric materials are non-conducting).

The breakthrough, reported in an article in the September issue of Optics & Laser Technology, could greatly reduce the potential for grating distortion and damage as well as system cooling requirements.

The chirped-pulse amplification technique makes it possible for a petawatt laser’s high-power pulses to pass through laser optics without damaging them. Before amplification, low-energy laser pulses are passed through diffraction gratings to stretch their duration by as much as 25,000 times. Thus their peak power is reduced and optics that the pulses pass through remain intact. After amplification, the pulses are recompressed back to near their original duration. Credit: The Nobel Committee for Physics

“The new gratings are a cornerstone of our efforts to advance petawatt lasers 10 times to 1,000 times in average power, which is needed for scientific and commercial applications,” said Constantin Haefner, Program Director for Advanced Photon Technologies.

“MLD gratings for picosecond (trillionth of a second)-duration lasers have enabled a variety of high-average-power laser systems,” added laser physicist David Alessi, lead author of the Optics & Laser Technology paper. “For more than a decade, the ultrafast laser community has been pursuing MLD gratings suitable for 30-femtosecond lasers to improve efficiency and, more recently, to increase average power. Our recent grating work has demonstrated a solution to this challenging problem for which there is large-scale interest.”

Based on Decades of LLNL Research

The new gratings represent the culmination of two Laboratory Directed Research and Development (LDRD) projects and LLNL’s years of experience in developing high-energy laser systems. The Laboratory has also been a decades-long leader in the design and fabrication of the world’s largest diffraction gratings, such as the gold gratings used to produce 500-joule petawatt pulses on the Nova laser, the world’s first petawatt laser, in the 1990s.

New technology, however, was needed for NIF’s petawatt-class Advanced Radiographic Capability (ARC) project because of the much higher energy of NIF’s laser pulses. Pulse-compression gratings of sufficient size, efficiency, and damage resistance had to be fabricated to handle the record-setting beam energy produced by NIF. 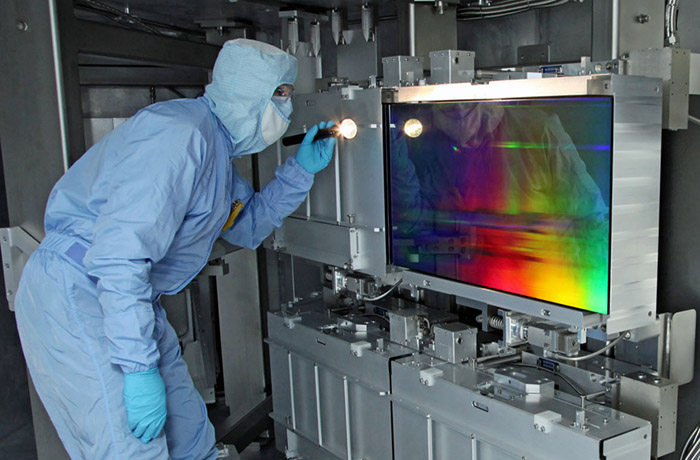 In an LDRD-funded project, LLNL optics engineer Jerry Britten and his colleagues invented the MLD grating. This new grating technology consists of adding a dielectric groove structure on top of an MLD mirror. 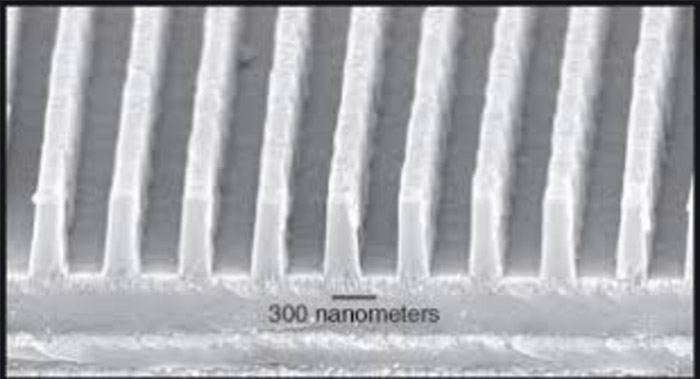 Scanning electron micrograph showing the surface detail of a dielectric grating. By precisely controlling the width and height of surface grooves, Livermore researchers can produce diffraction gratings with efficiencies close to the theoretical limit and the highest possible damage threshold. A remarkable 450 miles (730 kilometers) of lines cover the surface of one grating. (Click to Enlarge)
These MLD gratings, which have higher diffraction efficiency than gold or other metals, allowed the laser energy density to be increased tenfold at a diffraction efficiency approaching 100 percent. In 2008 the Lab began production of 40 one-meter-wide gratings for ARC, the largest such gratings ever made.

But these multilayer dielectric gratings don’t work very well for titanium-sapphire lasers used in high-average-power laser systems. “Because they can only reflect a limited span of wavelength, they don’t support the very short pulses desired,” said Alessi. “Hence everyone uses gold gratings—but on gold gratings unfortunately 3.5 percent of the incident light (energy) is absorbed and another .5 to 1 percent is lost through other routes.”

This adds up to about a 20- to 25-percent loss of the initial laser energy in a 4-grating compressor. For high-average-power lasers, these losses contribute to heat and optics distortions.

“Wasting 20 percent of the total output isn’t cost effective,” Haefner said. “And the generated heat by the absorbed light distorts the beam, diminishing the overall laser intensity and the quality of the experiments.”

Second, they developed an active cooling system to remove residual heat from meter-scale grating substrates without distorting the beam. Using ultra-low thermal expansion substrates and this specialized cooling, kilowatt-class operation was demonstrated. This was an improvement of approximately three orders of magnitude over conventional gratings for single-shot operation, and about five to seven times better than uncooled, ultra-low expansion gratings.

This new generation of gratings technology was also called for in 2013, when LLNL contracted to produce the High-Repetition-Rate Advanced Petawatt Laser System (HAPLS) for the European Union’s ELI Beamlines Research Center in Dolní Břežany, Czech Republic. HAPLS is a titanium-doped sapphire laser designed to produce 30-femtosecond pulses with 30 joules of energy at a repetition rate of 10 hertz. This corresponds to an average output power of 300 watts.

The GCDR gratings, along with the LLNL-developed active cooling system, ultra-low thermal expansion substrates, and a variety of other innovations enabled HAPLS to meet its design requirements. The system was installed in the ELI Beamlines Research Center in December 2017.

As the grating compressor technology still suffered the approximately 20 percent loss in the compressor, the researchers continued advancing the multilayer dielectric grating technology. To deal with the bandwidth limitations of MLD gratings, they set out to fabricate a multilayer “stack” that would maximize the span of reflected wavelengths. Using grating design codes, Alessi designed a “very sophisticated stack,” Haefner said, “and then Jerry Britten and Hoang Nguyen were able to make it.”

The researchers also tinkered with the angle at which the laser beams hit the grating, setting it close to where the beam reflects directly back on itself like a mirror, known as the Littrow angle. “The largest (frequency) spectrum that gets reflected is exactly at that Littrow angle,” Haefner said. To get the beam in and out of the compressor, the researchers tilted the grating so the beam reflects slightly upward, or out-of-plane. 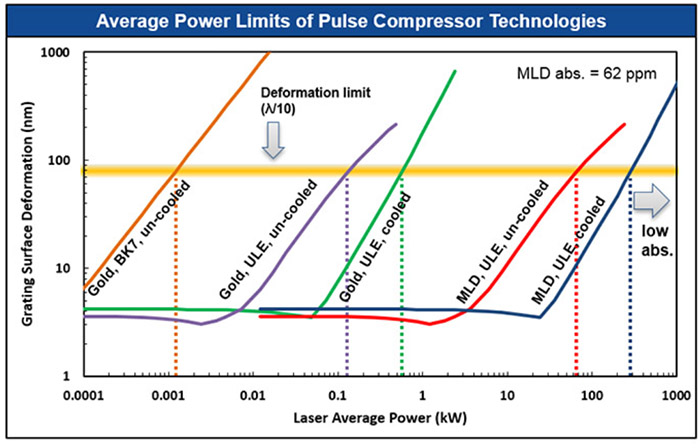 Average-power limits of various grating technologies are shown on a log (power of 10) scale. The most commonly used gratings in ultrafast lasers (pulse durations below 100 femtoseconds) are gold gratings on a standard glass substrate. The modeling shows that the average power of these is limited to a few watts. Gold gratings on ultra-low thermal expansion (ULE) substrates are starting to be used more often but they only go up to about 100 watts. Cooling a ULE substrate increases average power handling to more than 500 watts, enabling HAPLS. Because of their low absorption, the MLD gratings are on the right of the scale; combining MLD gratings with a ULE substrate and active cooling could enable average powers above 200 kilowatts.

By building a symmetric 4-grating compressor to compensate for the tilt, all out-of-plane effects are compensated for while the bandwidth is maximized and makes use of the high-efficiency MLD grating.

Metallic gratings using low thermal-expansion material are limited to 50 to 100 watts without the active cooling used in HAPLS. “For the next-generation lasers that we are now designing, there is no other way to go than MLD,” Haefner said. “The APT team has demonstrated high-average-power gratings that for the first time in the world have overcome the kilowatt barrier; what we’re projecting now is about 300 to 500 kilowatts.”

In the paper, the researchers predicted the new MLD gratings “can enable pulse compressors for petawatt-class systems operating at repetition rates as high as 10 kHz when combined with active cooling.” The efficiency advancement is also important for small systems: industry has already shown interest in the new gratings, Haefner said.

“Any laser out there could receive about a 20 percent performance enhancement by changing the compressor to the new technology,” he added. “It is really an enabling technology for the next generation of ultrafast high-average-power lasers.”