A novel chemical process designed to protect NIF’s fused-silica optics from laser damage has been modified to provide the same benefit for sapphire optics, wafers, windows, and cones.

Called the advanced mitigation process, or AMP, the technique uses wet chemical etching to expose sub-surface mechanical damage created as optics are fabricated and to remove laser-absorbing damage precursors on the optic’s surface. The sapphire AMP process doubles sapphire’s surface laser damage resistance while increasing its mechanical strength by up to 2.6 times. 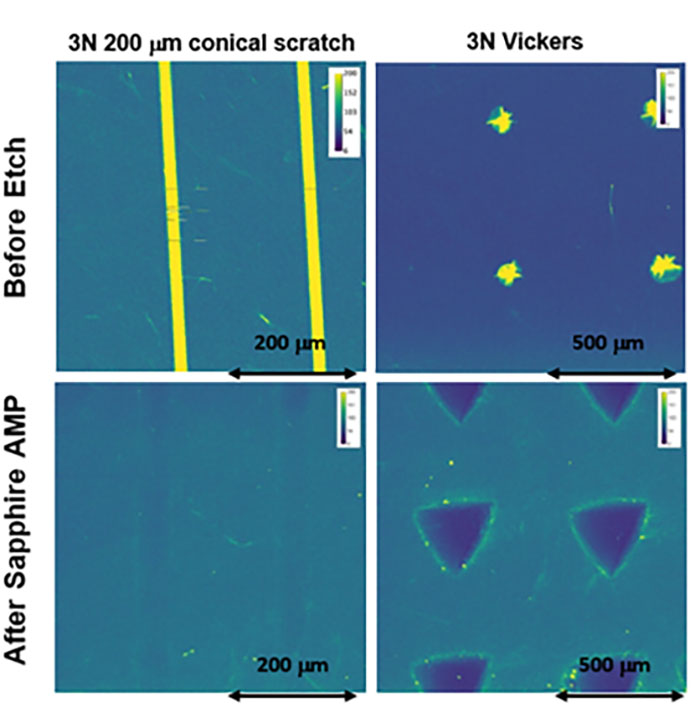 LLNL and Creighton University researchers described the process and the properties of the resulting sapphire workpieces in a paper published in the Feb. 20 issue of Applied Optics. The paper was selected as an “editor’s pick” by the journal.

“We invented AMP to reduce the damage precursors on the surface of fused silica, which increases laser damage resistance,” said Tayyab Suratwala, LLNL program director for Optics and Materials Science & Technology, “and now we’ve been able to demonstrate it on different materials. One is now sapphire, but we’ve also been able to do it on KDP (potassium dihydrogen phosphate) optics,” which are used throughout NIF for optical switching and frequency conversion.

“Even though sapphire AMP uses very different chemistry compared with fused silica AMP,” he added, “it was designed using the same principles of removing laser damage precursors from the surface.”

For sapphire AMP, a workpiece is treated with a concentrated mixture of sulfuric and phosphoric acid at 220°C, followed with phosphoric acid at 160°C, then with a sodium hydroxide base and surfactant at 40°C, and finally with a high-pressure deionized water spray rinse.

“Sapphire is a very chemically inert material and hence challenging to chemically etch,” Suratwala said, “so we had to resort to concentrated acids at elevated temperatures to get an effective etch.”

Sapphire optics, such as gain media hosts and in high-pressure windows and missile domes in laser systems, are attractive because of their high optical transparency, fracture toughness, and thermal conductivity, resulting in high laser transmission and high thermal resistance to distortion or mechanical failure.

For example, the short-pulse beamline in the LLNL-developed High Repetition-Rate Advanced Petawatt Laser System (HAPLS), now installed in the ELI Beamlines Research Center in the Czech Republic, is a titanium-sapphire-based chirped-pulse amplification system.

Despite sapphire’s strength, the researchers said, damage on optic surfaces can possibly limit performance in some high-ﬂuence (energy per unit area) laser systems. The mechanical strength of the sapphire windows and domes used as pressure barriers is governed by the ﬂaw distributions on the fabricated window, which can also inhibit performance.