When the 100,000th visitor to the National Ignition Facility walked through the door last month, there were no bells or whistles. But it was a monumental moment.

“Ever since groundbreaking, NIF has attracted visitors because of its sheer size, mission, and reputation as the world’s largest and most energetic laser facility,” says NIF Operations Manager Bruno Von Wonterghem. “One hundred thousand visitors—and I assure you every single one was in awe of what we have here and what it does every day for national security, frontier science, and fusion science and energy. It is a real tribute to pairing big science and advanced technologies that has made NIF and the Lawrence Livermore National Laboratory famous.” 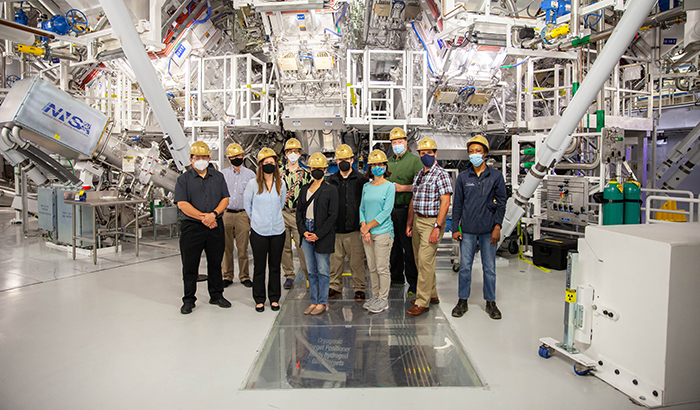 A group that included the 100,000th visitor to NIF poses in front of the Target Chamber during a tour in late June 2022. The group represented San Francisco’s Highland Technology Inc. Credit: Mark Meamber.

NIF has been operating for 12 years, but tours began well before the facility fired its first laser. In fact, parts of the facility were designed with visitors in mind.

“We knew the facility needed to be friendly to the staff, visiting scientists, and our guests,” says Ed Moses, former NIF & Photon Science principal associate director, who managed the design and construction of the project.

“We invited visitors as soon as we had groundbreaking and poured the first concrete,” Moses says. “It was very important to share our progress with our Congressional and DOE sponsors, our national and international laboratory partners, our vendors, students, and the general public. We wanted everyone to be excited about NIF’s missions and technologies.”

Fred Holdener, a retired senior mechanical engineer, began giving tours in 2002 before the laser was built. “Once the building was up, we took people onto the roof and showed them the windmills on the Altamont Pass because there wasn’t much else to see yet,” he recalled in a 2018 NIF&PS News article. “Then we’d take them to the four-story loft to see the giant blowers, which eventually would cool the amplifiers. That’s how early I started.”

At that time NIF visitors had to wear steel-toed boots and orange vests. 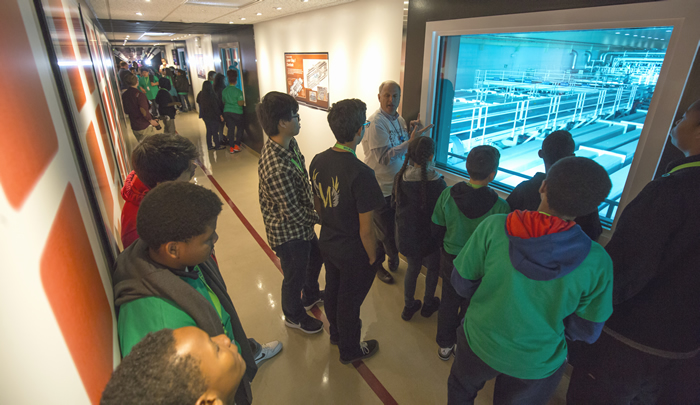 Bay Area students touring NIF during LLNL’s STEM Day at the Lab in 2017 gaze at one of NIF’s two laser bays from the Laser Bay overlook.

Moses notes that “the Laser Bay overlook was designed to show visitors the scale of the facility and the laser architecture, the Target Bay mezzanine was configured to show how experiments were set up and performed, and the Control Room, modeled after the NASA control room in Houston, has large glass windows to allow visitors a peek behind the scenes during the experimental countdown.

“The lobby ties it all together with an interactive video and full-scale optical components and targets. Together, in a 30-minute walking tour, our visitors have a great overview of what the NIF is and what it was built for.” 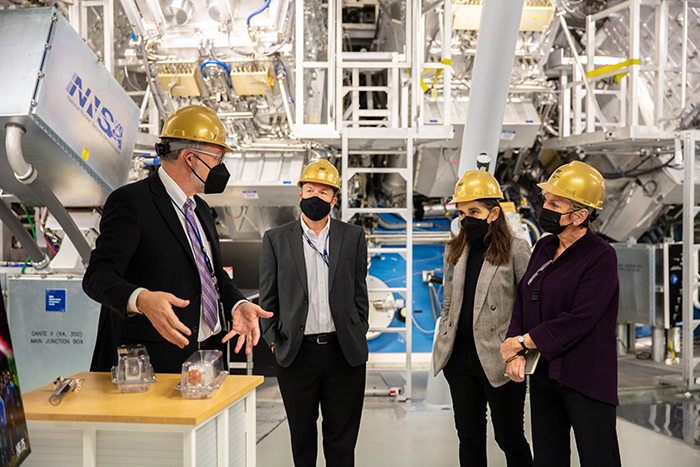 About a third of the visitors came through the facility in just a few, separate days. About 3,000 people attended the 2009 NIF Dedication, including vendor partners, collaborators from around the world, and national, state, and regional representatives. LLNL’s 2012 and 2017 Family Days saw more than 13,000 visitors. 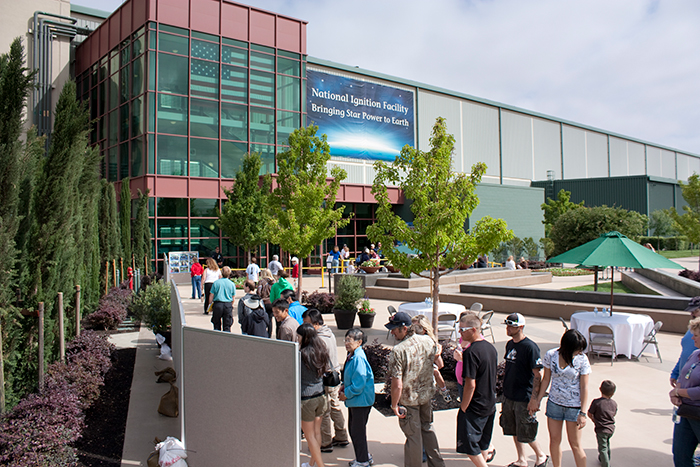 Visitors line up for tours during the 2009 NIF dedication.

In 2012, a different kind of visitor spent time at NIF—the cast and crew of the 2013 film “Star Trek Into Darkness.” Captain Kirk and his crew spent three weeks during a scheduled maintenance period filming in the laser bays, the switchyards, and the Target Bay. All aspects of NIF were carefully curated to simulate the Starship Enterprise. 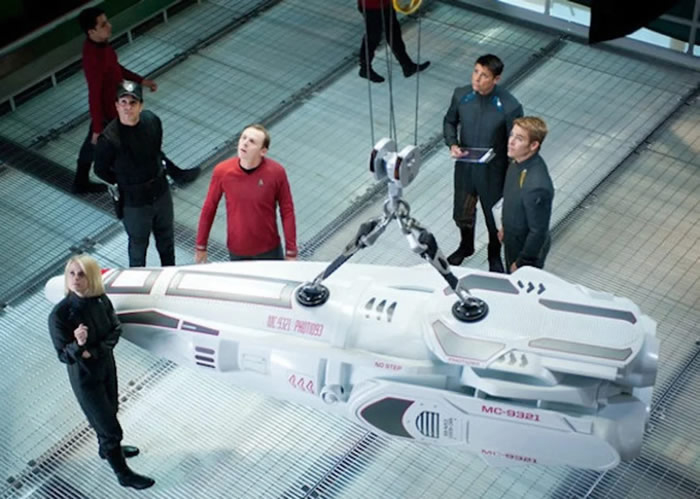 One of the many scenes shot at NIF for the 2013 film “Star Trek Into Darkness.”

“Now so many more people can experience NIF because it’s not tied to an in-person visit,” says NIF&PS Tours and Events Administrator CaT Vogen. “Anyone with a good Internet connection can get inside this amazing facility. And we can go into places that are rarely accessible, like the Target Chamber, which is only opened about once a year for maintenance.”

Tour Guides are the Secret Sauce

Essential to sharing NIF with the public is a cohort of dedicated volunteer tour guides and safety leads, who take time out from their busy schedules to spread the word about NIF’s science and missions.

“Our duty as tour guides is to blow them away with the science, which isn’t hard to do considering the amazing things that go on here,” says NIF/LLNL Certified Laser Safety Officer Jamie King. “We want to leave them inspired and feeling a sense of awe. This also helps them to understand how well their tax dollars are being spent.”

Tour guides have a variety of reasons for wanting to become tour guides. Experimental physicist Patrick Poole was inspired to become a guide after touring NIF several years in a row through the annual joint meeting of the NIF and Jupiter Laser Facility user groups.

“Every tour had a different guide and I learned so much each time,” he says. “The most fascinating tour was by a guide who worked in vacuum systems. I told myself, I need to do that if I ever work there.”

For Lisa Belk, associate director for LLNL’s Business Directorate, leading tours seemed to be the next logical challenge after becoming a NIF work control officer.

“I had to learn how the entire laser worked, and I wanted to share my enthusiasm about it with others” she says. “The facility is amazing. Giving tours is immensely rewarding and a great opportunity to connect the community with our work.” She became a tour guide in 2007, before NIF was fully operational, and has led more than 200 tours.

One reason Belk has stayed on as a tour guide is to be a good representative of women in science. “Representation is important, and this is one thing I can do to encourage girls to see themselves as future scientists and leaders,” she explains. “I feel very honored to show visitors our world-class laser facility that brings together the best of science, technology, and engineering in support of our national security missions.”

Every week, more visitors experience the wonder that is NIF, and every week, the scientific community uses this unique instrument to seek to understand unprecedented regimes of pressure and temperature. NIF lives on the threshold of the future. See for yourself—contact our tour office.

Getting to Know NIF