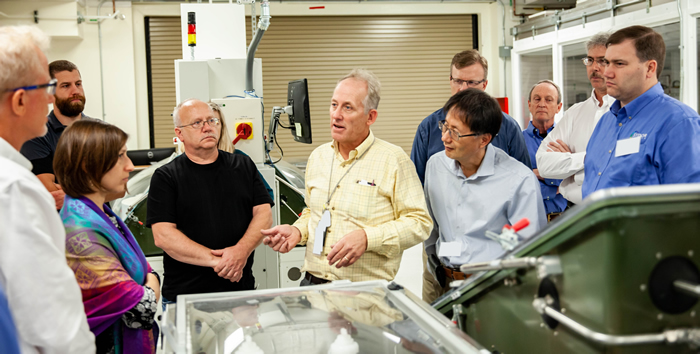 “The scope and scale of the technological achievements required to bring the facility to ‘routine’ operational life is more than extraordinary,” Cossey said. “Equally impressive was the caliber of the NIF associates I was privileged to meet whose obvious passion is to steadily eclipse yesterday’s accomplishments.”

APOMA represents some of the biggest companies involved in making precision optics products, like the tens of thousands of lenses, mirrors, amplifier slabs, and other optics that create, steer, and focus high-energy laser beams for many of the high-energy laser projects in the NIF & PS Directorate, such as NIF. 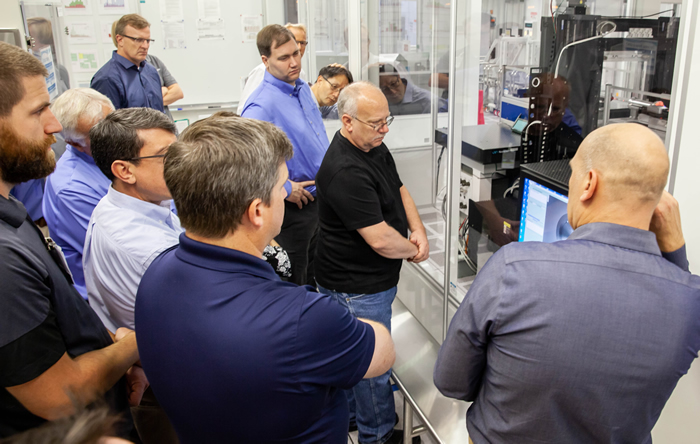 APOMA’s membership includes firms that have supplied products for NIF, including Coherent, Zygo Corp., Optimax Systems, Optipro Systems, and QED. LLNL is also a member, along with institutions such as Los Alamos, Oak Ridge, Argonne, and Brookhaven national laboratories, Caltech, and the University of Rochester.

Previous laser workshops were in Tucson, Arizona, but APOMA asked the Lab to host this year’s session.

“It’s quite an honor for us to have this group here,” said Tayyab Suratwala, program director for Optics and Materials Science & Technology in the NIF & PS Directorate. “It’s also significant that the Lab is getting more and more recognition as a science & technology center for optics.”

Suratwala helped kick off the workshop with a presentation on the material science of optical fabrication. He later talked about the predictive models for grinding and polishing various optical materials. A renowned expert in those topics, Suratwala authored the recently published book Materials Science and Technology of Optical Fabrication, which captures the Lab’s quest to develop advanced optics that are resistant to laser damage.

By its nature, the polishing and grinding needed to subtract material to create optics can also cause minute surface flaws that affect their ability to withstand damage from high-energy laser beams. That damage can be costly if NIF must frequently replace those optics.

“We went on an adventure trying to understand defects on the surface, mainly because we found it was linked to laser damage,” Suratwala told the crowd. “These defects are enemy number one in attacking laser damage.”

One rogue particle that intrudes on the polishing and grinding process can cause a scratch, which is a precursor for laser damage. Yet removing all rogue particles from an optical fabrication process is a challenging task, he said.

NIF’s research over the years has uncovered fundamental knowledge “so we can transition from more of an artisan approach to a more science-based, deterministic process,” NIF physicist Nan Shen told the audience during her presentation. 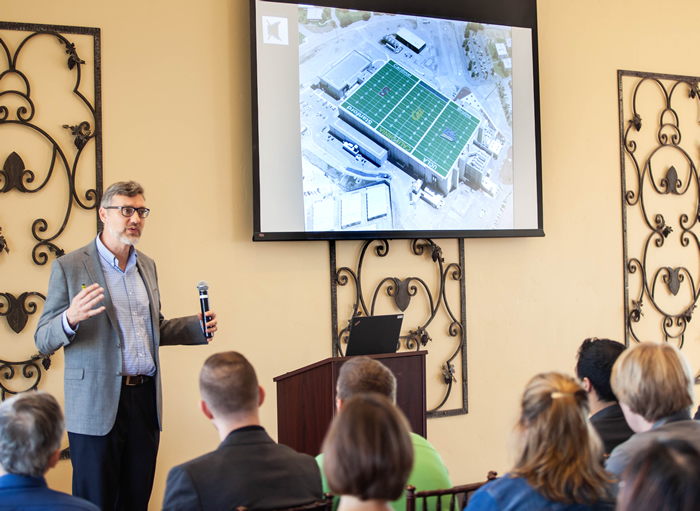 The precision of NIF’s optics are so important because of the facility’s mission of stockpile stewardship, which includes creating fusion energy and doing research on the physics of high energy density matter, NIF Director Mark Herrmann said in his workshop presentation.

“It’s the most energetic laser, it’s not just a flamethrower,” Herrmann said. “With new tools, we open up new windows in science. There’s a lot of things we now can understand that we’ve never understood before.”

Workshop attendees start their NIF tour in the Lobby.

The tours included a stop inside NIF’s Target Bay. The attendees also enjoyed first-hand looks at facilities that handle the Lab’s optics manufacturing, research, and damage mitigation efforts. The visitors watched as the automated optics damage mitigation system used a laser to drill out a damaged spot. (For more details on this process, see “Automation Speeds and Smooths NIF’s Optics Recycle Loop.”)

“The work that goes into the inspection and reconditioning of the optics was mind blowing,” said Justin Tracy, advanced process supervisor with LaCroix Precision Optics.

His favorite part of the tour was seeing the Lab’s work using magnetorheological finishing (MRF), a computer-controlled optical surface polishing technology. Tracy, who helped install the first MRF machine at the lab years ago, said it was “incredible to see what they had accomplished using that technology in combination with their other optical processing developments.”

And he enjoyed learning more about “the theory behind how other polishing and grinding tools actually work at the micro level, as well as some of the other machine technologies out there and ancillary processes.”

Tracy hadn’t returned to NIF since before it was completed, “so it was interesting to see it all put together. You can read all the factoids on the laser and the facility,” he said, “but it was not until I was in its presence that the enormity and technical challenges of constructing such a project really hit home.”

He also praised the Lab employees who conducted the tours.

“You can tell they have pride in the work they are doing and all that has been accomplished,” he said.