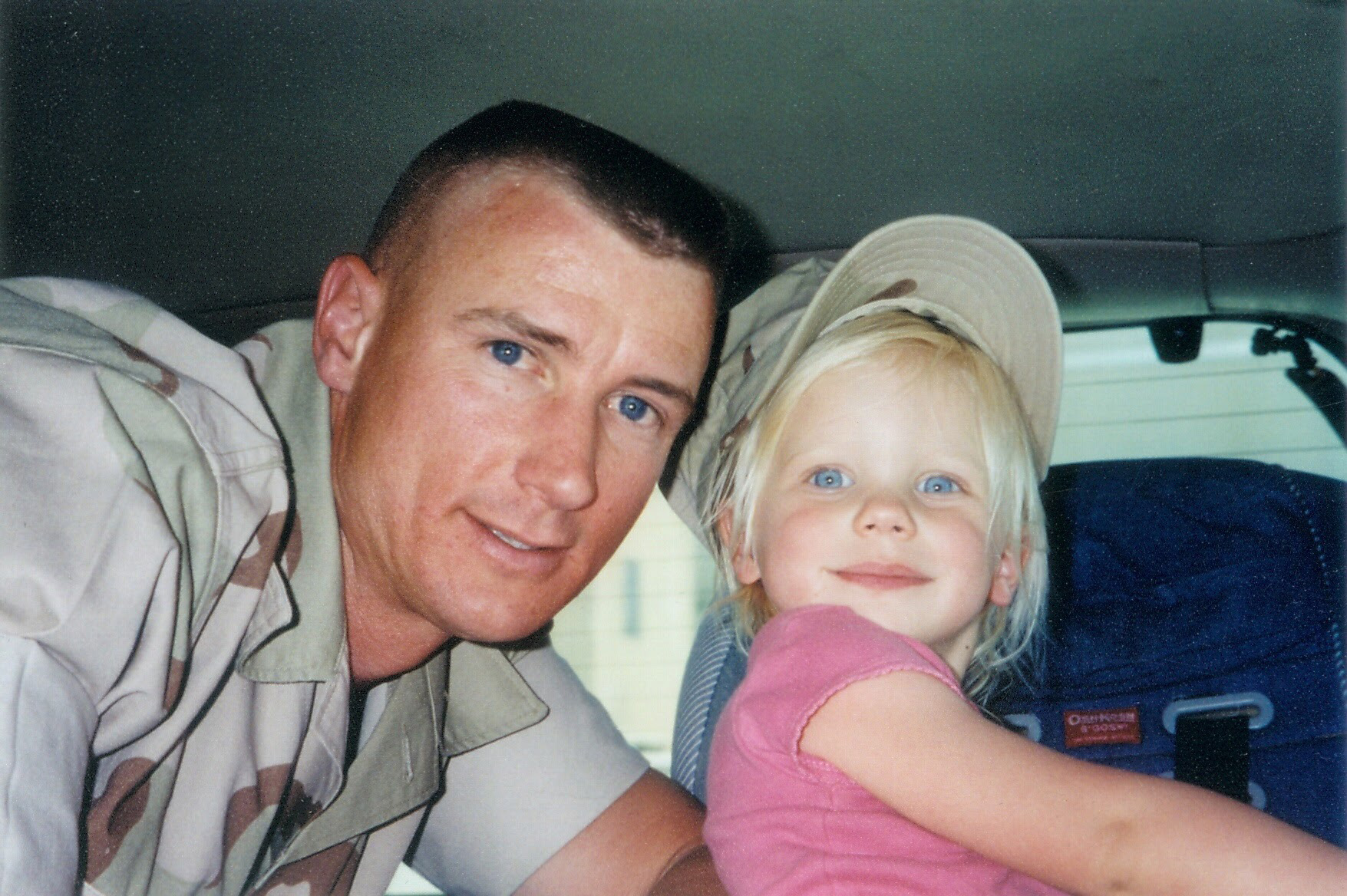 LLNL Gold Star summer intern Caitlin Rowe was 4 in this photo taken during her last visit with her dad, U.S. Marine Capt. Alan Rowe, before he was deployed to the Iraq War and killed in action in 2004. Photos courtesy of Caitlin Rowe

In her 21 years, Caitlin Rowe has overcome overwhelming obstacles to excel as a college graduate, as a summer intern working on nuclear survivability experiments—and as a person.

This summer, Rowe became a Gold Star intern at the LLNL’s National Ignition Facility (NIF), the world’s largest and most energetic laser.

Rowe is the daughter of U.S. Marine Capt. Alan Rowe, who was killed on Sept. 3, 2004, by an improvised explosive device (IED) in the Iraq War. A Gold Star family is one that has lost an immediate family member in the line of duty during military service.

She’s become a sought-after public speaker to talk about her experiences growing up as a Gold Star daughter. 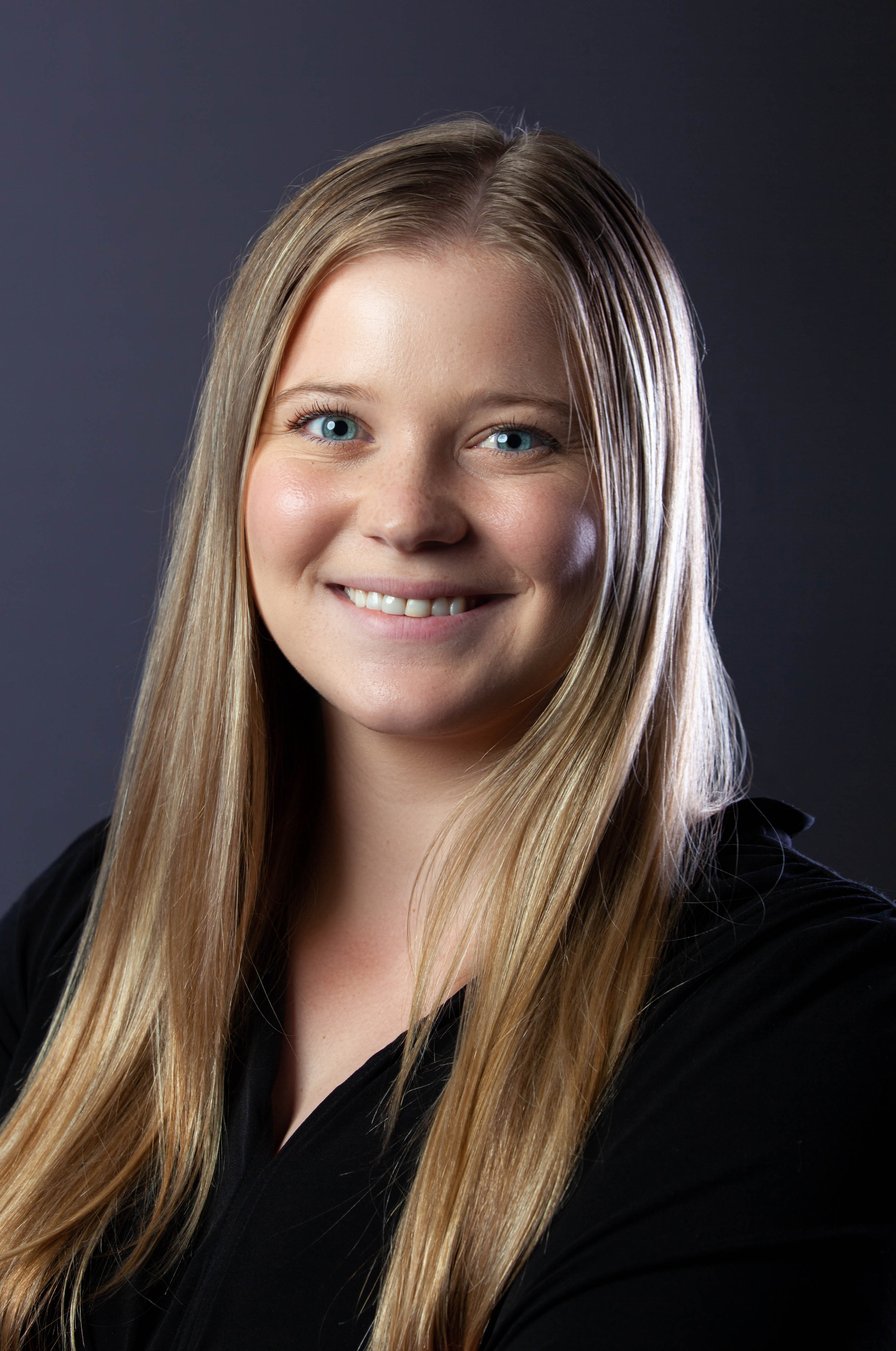 Caitlin Rowe “Sharing my story and the story about my dad is important to me,” Rowe said. “It’s my way to honor my dad and his sacrifice. Knowing that his story is helping others in some way would be exactly what he wanted. I like to think he’d be proud of me for doing it.”

LLNL’s Shaun Stephenson, Veteran/Military Strategic Outreach and Recruiting Program manager in the Office of Government and External Affairs and a Gold Star sibling, has become a strong supporter and mentor for Rowe.

“You just want to support these deserving kids—you want that opportunity,” said Stephenson, who is also the training functional area manager in Human Resources. “They’ve been through hell. When you see a child go through that and is now an adult and is making a positive contribution on society as Caitlin is—you want that person here at the Laboratory.”

“She was an excellent fit for our team,” Blue said. “Her excellent academic record, her field of study, her theoretical knowledge, and her desire to get hands-on, in-the-lab ‘wrenching’ on diagnostic hardware all made her an outstanding candidate.”

At NIF this summer, Rowe worked with the NSA team on nuclear survivability experiments for current and future strategic systems. She analyzed the engineering process of experiments designed to study the response of materials to intense bursts of radiation. She then designed and implemented process improvements which fundamentally improved the quality of data the team was able to acquire on NIF.

Rowe had high praise for her Lab internship, which began in May.

“Overall, it was very positive,” she said. “The Lab does a very good job of emphasizing work-life balance, just being flexible, which is important coming out of a pandemic.

“I find that all across the Lab, everything you have to do is very carefully thought out to not waste your time,” she said. “There isn’t busy work. I really appreciated that about the internship. Everything I was doing benefited me. Supervisors were great, everyone’s supportive, and it seemed that everyone really cared about teaching me what I want to learn and need to know.”

Rowe also gave the Lab’s culture high marks. “Everyone I’ve met at the Lab is very intelligent,” she said. “There are more intelligent people concentrated in a smaller location than I’ve ever experienced in my entire life. I just hear conversations and I think I’m learning a new language because I understand about 80 percent of it. 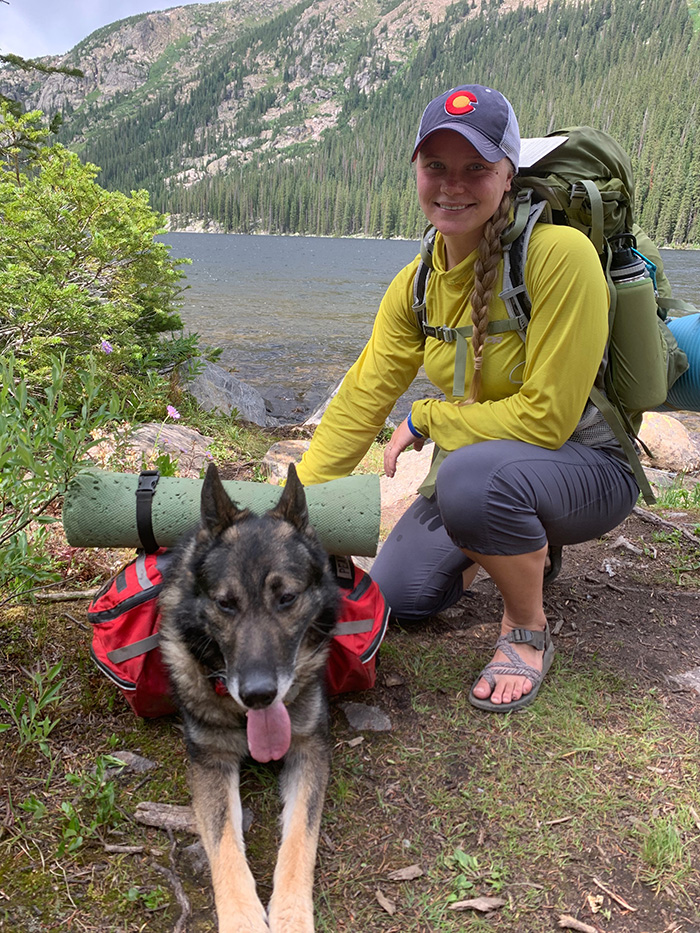 Caitlin Rowe, a 2022 LLNL summer intern, poses with her dog Peak during a backpacking trip in Colorado in 2019.

The path that led Rowe to LLNL included her upbringing in Twenty-Nine Palms. The small Southern California city is close to Joshua Tree National Park, with its unique variety of plants and animals in two distinct desert ecosystems, the Mojave and the Colorado. As a high school student, Rowe worked at Joshua Tree, and that’s where her interest in the environment and science took hold.

“I always wanted to work outdoors,” she said. “I realized that I’ve always been a little bit more analytical and I was really drawn to science, engineering, and chemistry, and I enjoyed doing it.”

After high school, Rowe attended the University of Southern California, where she graduated last year with a bachelor’s degree in industrial and systems engineering with an emphasis on environmental engineering.

She was helped in her college education by Children of Fallen Patriots (CFP), a national organization that provides college scholarships and educational counseling to military children who have lost a parent in the line of duty. The CFP Foundation helped pay for her computer as well as tuition.

As a result of the scholarships and help from foundations, Rowe has become an in-demand public speaker. In addition to CFP, she’s given speeches before the Marine Corps Scholarship Foundation and the Knights of Heroes, a nonprofit for teaching Gold Star children outdoor skills.

“The motivation to share my story through public speaking is partially from the desire to help and give back,” she said. “The various scholarships and foundations not only helped me get through college debt-free, but they’ve connected me with a community I never would have imagined.

“There’s the common quote, ‘They say you die twice. One time when you stop breathing and a second time, a bit later on, when somebody says your name for the last time.’ In some ways, speaking about my dad and our story helps me feel connected to him, even this many years later.”

Last year Rowe was the featured speaker at the CFP’s 12th Annual Greenwich Gala in Greenwich, Connecticut. The event raised more than a record $3 million in one night. She was invited as a guest to this year’s gala.

Rowe’s hobbies include motorcycle riding, which she picked up four years ago; she began racing about two years ago. After her summer internship ended, she headed to Thunderhill Raceway in Willows. She’s raced most of the tracks in California, and her favorite is Chuckwalla Valley Raceway in Desert Center, California, near Joshua Tree park. 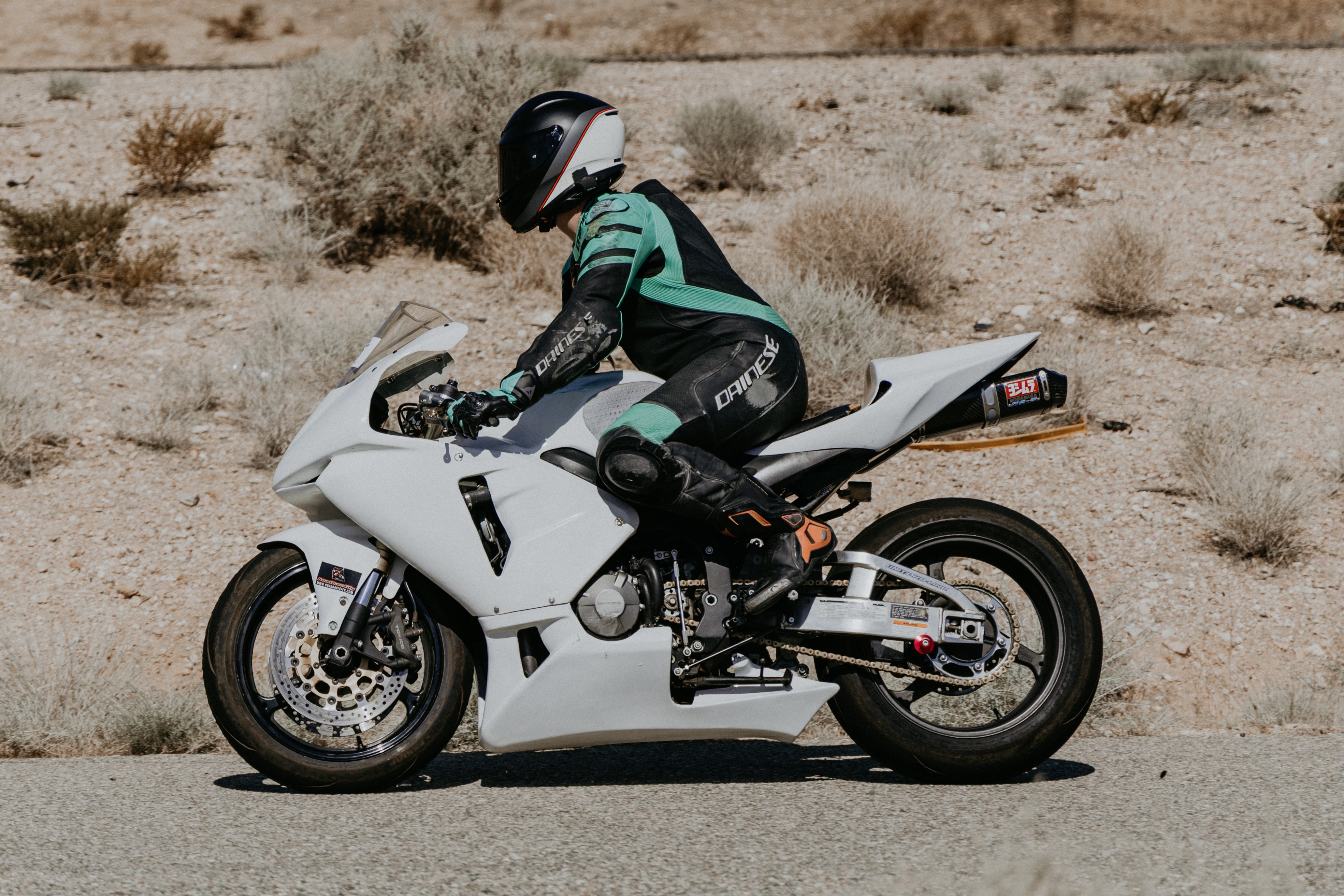 Caitlin Rowe’s hobbies include motorcycle racing, and she says she’s raced most of the tracks in California.

“When I'm riding on the track, there's nothing on my mind other than my bike and the turn ahead of me,” she said. “Despite the speed and adrenaline, it's sort of like my own way to meditate or relax.

“It's physically exhausting and requires quick thinking—you don't have any time to dwell on mistakes. You have to move on immediately and prepare for the next corner. It's like any other sport where you're trying to improve, and I love the feeling of getting faster and more confident.”

Rowe also loves working on her own motorcycles and draws several benefits from the skill. “It helps me trust my bike when I’m riding,” she said. “It’s frustrating and takes double the amount of time I usually plan for, but it’s also calming to work with my hands and there is always something more to learn.”

Her father was always tinkering with cars and off-road vehicles. “Being able to do it myself on my motorcycles is also a very cool way to connect with him,” she said. 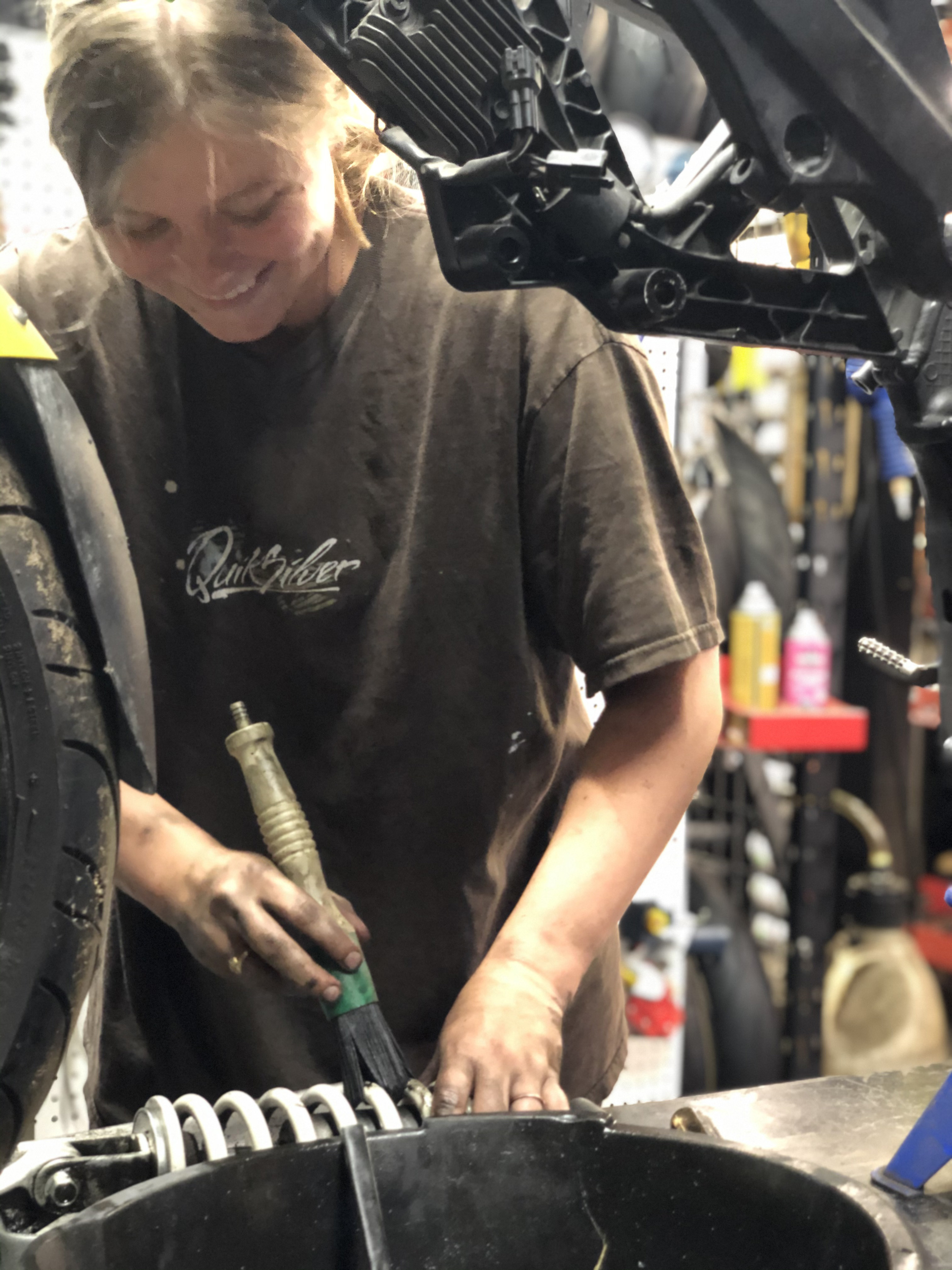 Caitlin Rowe works on her motorcycle.

Rowe has returned to Los Angeles to attend graduate school at USC and study for her master’s degree in engineering management. Meanwhile she continues her internship at the Lab and said that working at LLNL is “definitely” in her future.

Stephenson has his own remarkable story as a Gold Star sibling. The Iraq War veteran lost his best friend—his brother, Dion—on Jan. 29, 1991. Dion Stephenson was killed by friendly fire in the Battle of Khafji and was one of the first American casualties of Operation Desert Storm.

Stephenson is honoring his brother through his work on outreach and recruitment at LLNL. He’s helped build an extensive military and veteran pipeline involving military students, from JROTC in high schools, colleges, universities, and service academies, to reservists, active service members, and veterans. Stephenson has been instrumental in increasing the Lab’s veteran population by 52 percent from December 2019 to the present.

He sees a bright future for Rowe.

“When you sacrifice the way both of our families have and have this unique experience, it’s a bond that is authentic and genuine,” he said. “I think very highly of Caitlin. I think she’s going to do great things.”