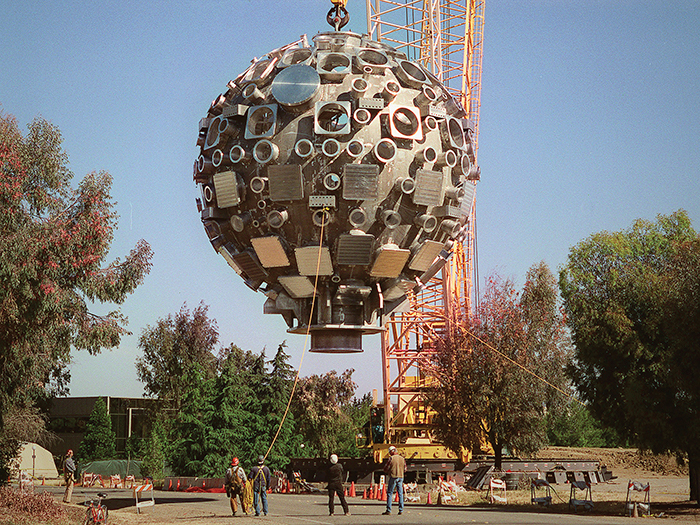 NIF’s Target Chamber is the epicenter of a busy schedule of high energy density laser experiments made possible by the extensive planning and engineering that took place 20 years ago this month when a giant crane hoisted the massive sphere into place.

The 287,000-pound chamber is the single largest piece of equipment made for NIF, which is itself the size of three football fields. The chamber is a cornerstone of NIF’s mission to ensure the safety, security, and reliability of the nation’s nuclear stockpile.

Here’s a look back at photos from LLNL’s archive of the Target Chamber’s installation, a key moment in the history of the world’s most energetic laser: 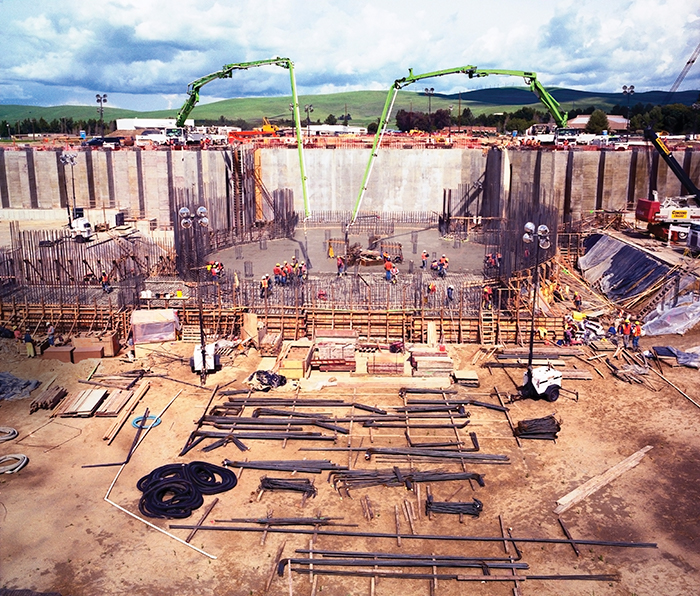 Groundbreaking for NIF occurred on May 29, 1997. One of biggest challenges was creating the foundation for the seven-story Target Bay, which houses the Target Chamber, diagnostic systems, and optics assemblies. The foundation reaches about 50 feet below ground level, so crews had to pump in nearly 2,600 cubic meters of concrete during one continuous pour that lasted about 18 hours. 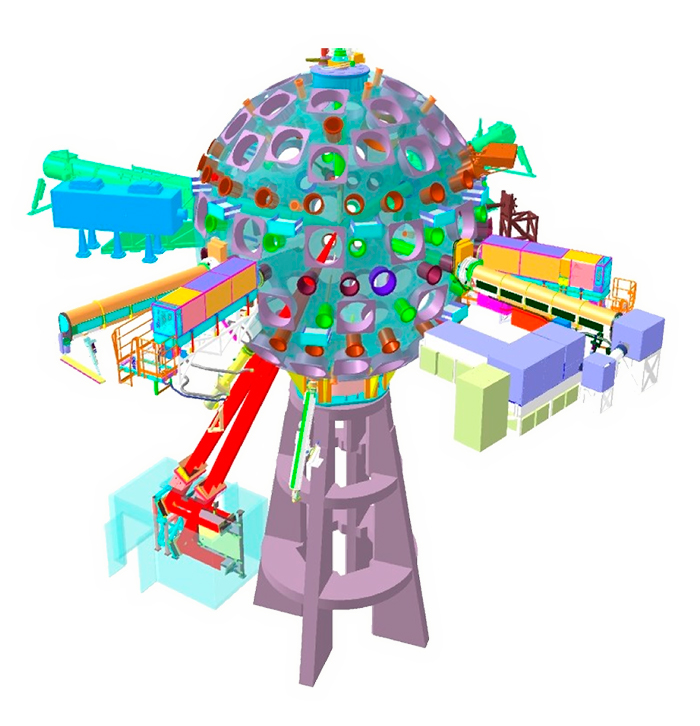 Portholes give beamlines and diagnostics access into the Target Chamber.

For the Target Chamber, the LLNL engineering team consulted with scientists and materials experts here and at Los Alamos National Laboratory, Sandia National Laboratory, the University of Rochester, and the Defense Threat Reduction Agency to make sure future experimental needs were not precluded.

The team came up with a design that was compared to a giant volleyball, featuring six symmetric middle plates and 12 asymmetric outer plates weighing about 7.5 tons each. The chamber needed to withstand the extreme conditions created by the high energy density and inertial confinement fusion (ICF) experiments supporting NIF’s Stockpile Stewardship Program mission, exposing the walls to extreme levels of neutrons, x rays, laser energy, debris, and hazardous materials while kept under a vacuum.

Construction of the individual components started outside the Lab by manufacturing contractor Pitt-Des Moines Inc. The plates, made from an aluminum alloy used for ships, were fabricated at Ravenswood Aluminum in Ravenswood, West Virginia. Then they were shipped to France, where they were forged by Creusot-Loire Industries. Next, the formed plates were transported to Precision Components of York, Pennsylvania for trimming and weld joint preparation. 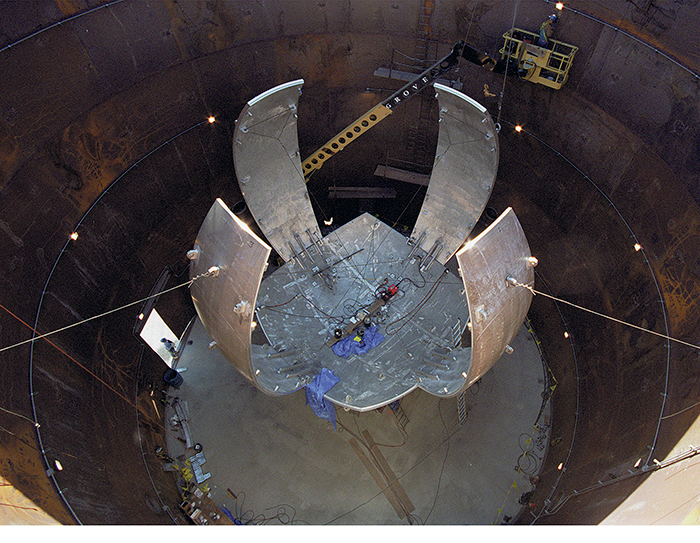 The first plates are positioned. 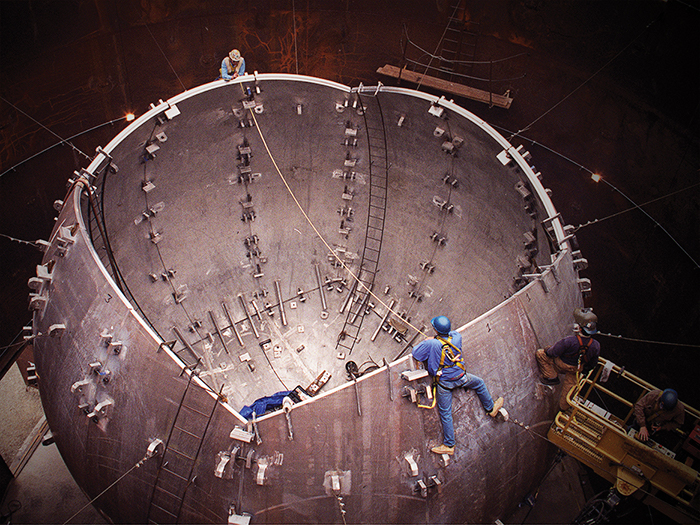 
The parts were then shipped to the Lab, where they were assembled and welded into place inside a temporary steel structure (shown above and below) that looked like an oil or water tank. 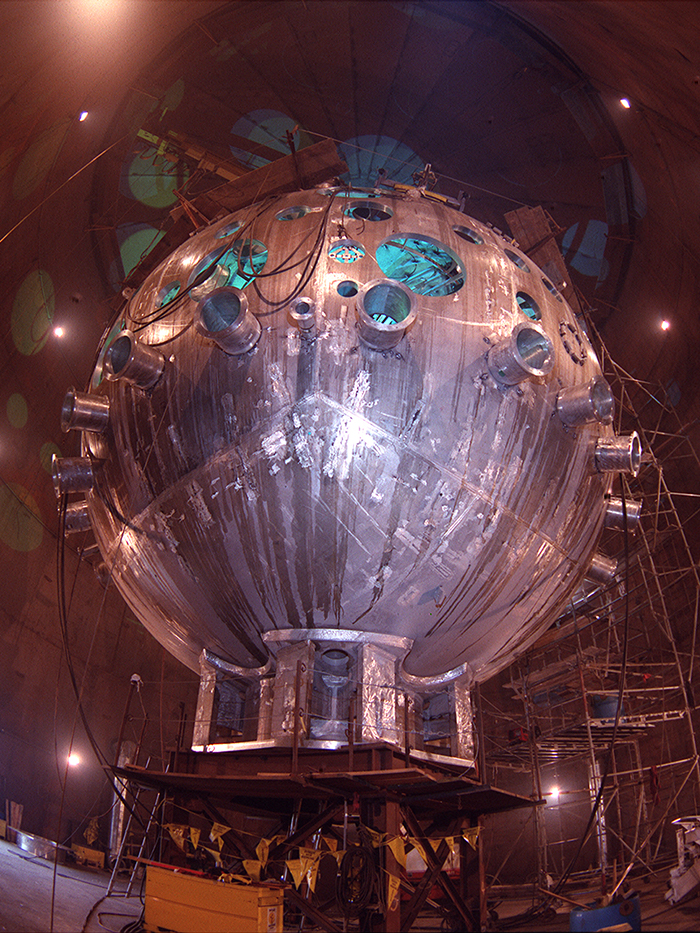 The enclosure was topped by a removable roof to keep out the rain and allow for temperature control. The chamber’s plates are 11 centimeters thick. They were later encased in a skin of gunite—a mixture of cement, sand, and water similar to the material that lines swimming pools. The gunite was combined with boron, a neutron-absorbing, activation-limiting material, and the surface was sealed with epoxy paint. 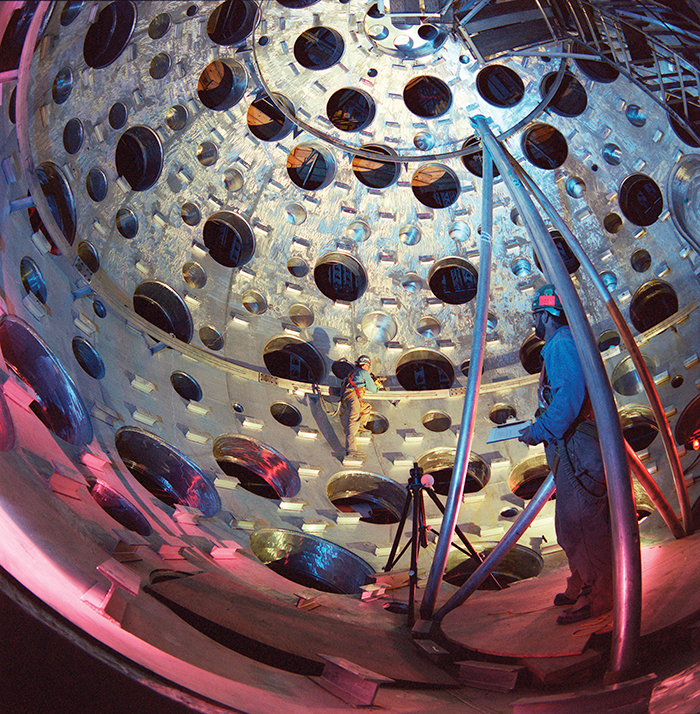 Crews used lasers to both map precise locations and to drill pilot holes for the 190 portholes needed for diagnostic instruments and to allow NIF’s 192 laser beams to enter the chamber. 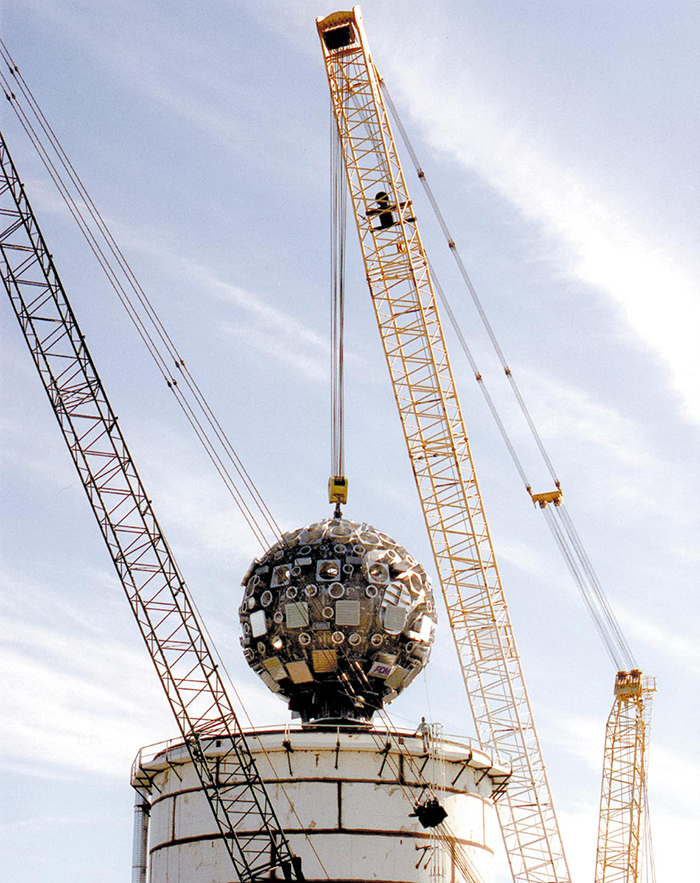 To lift the chamber from the temporary construction enclosure, a 14-story-tall crane with a 600-ton lifting capacity was brought to the Lab from the DOE’s Nevada Test Site.

“We all held our breath,” then-Lab Director Bruce Tarter recalled at the time.

The 900-ton crane, one of the largest ever assembled, was once used to lower weapons for underground testing, which had halted in 1992. So the crane, which required 66 trucks to transport, provided NIF a unique way to help start a new era of science-based stockpile stewardship testing. 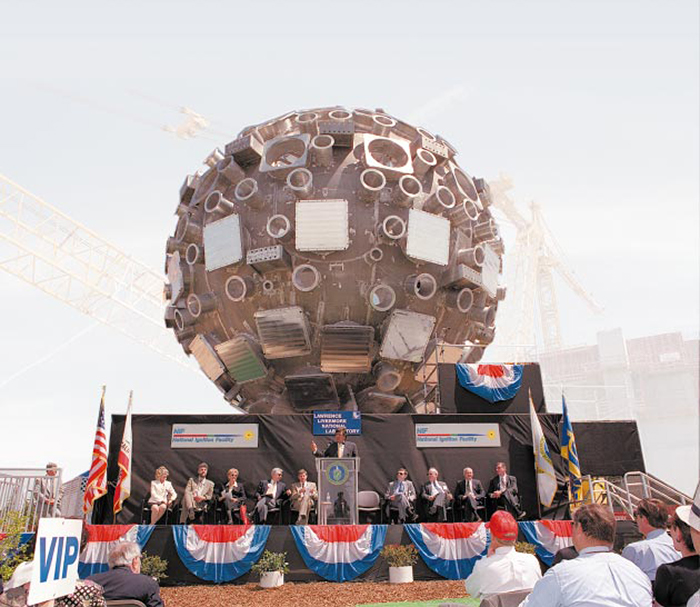 With the chamber mounted temporarily on a large crane transporter also borrowed from the Nevada Test Site, a public dedication ceremony was held June 11, 1999.

Tarter was joined by then-Energy Secretary Bill Richardson, senior defense officials from the United Kingdom and France, and a large crowd of employees and guests.

Graham Jordan, who was Britain’s deputy Defense Ministry undersecretary for science and technology, said the chamber looked like it “simply landed one night” from outer space. 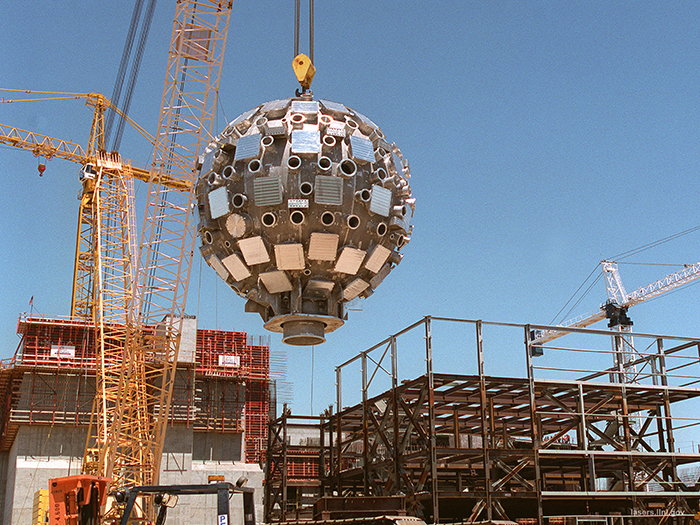 On June 17, 1999, the crane lifted the chamber again, rotated over the Target Bay and gently set the colossal sphere into place on a concrete pedestal. The operation only took about 30 minutes. 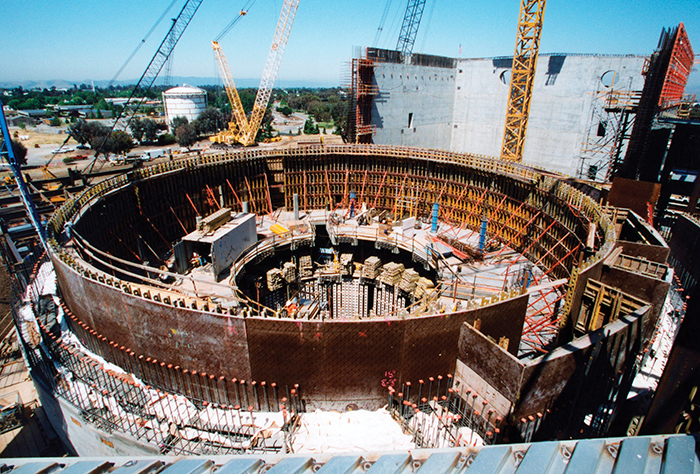 The Target Bay, before the Target Chamber was installed.

Workers aligned and secured the chamber before the walls and roof of the Target Bay—often called the “Grand Central Station” of NIF—were completed.

It would take another 10 years, however, for the entire facility to be fully completed and ready for shots. Dedication ceremonies for NIF were held on May 29, 2009.

The Target Chamber is now used for about 400 experiments per year, allowing scientists to create extreme states of matter, including temperatures of more than 180 million degrees Fahrenheit and pressures exceeding 100 billion times Earth’s atmosphere. 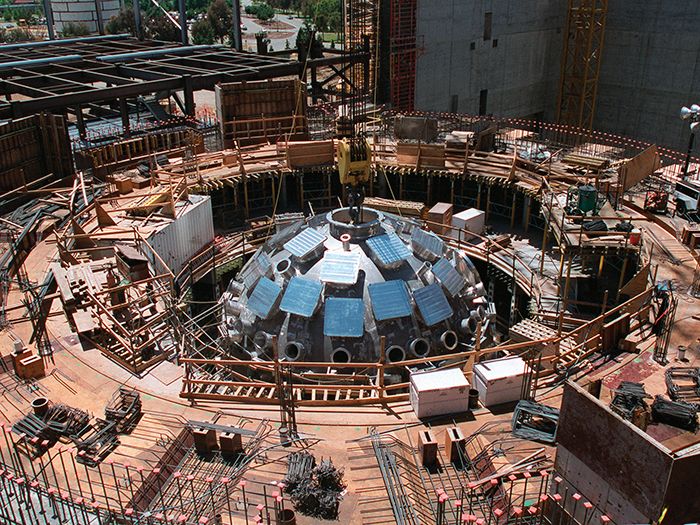