LLNL researchers and their collaborators have developed new high-energy pulse compression gratings that will be used in the world’s highest-power laser system, designed to deliver up to 10 petawatts (quadrillion watts) of peak power. A petawatt is about 1,000 times the capacity of the entire U.S. electric grid.

The high-energy, low-dispersion (HELD) multi-layer dielectric gratings will be installed in the L4-ATON laser system at the ELI-Beamlines Facility in the Czech Republic. L4-ATON can generate 1.5 kilojoules (kJ) of energy in 150-femtosecond (quadrillionths of a second) pulses, equal to an unprecedented 10 petawatts of power, at a repetition rate of one shot per minute. 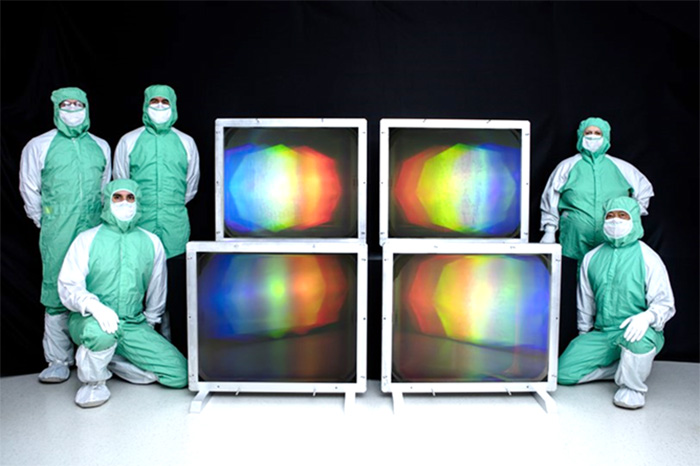 Members of LLNL’s Diffractive Optics Group with four of the 85×70-centimeter HELD gratings to be installed in the ELI-Beamlines L4-ATON laser system. Meter-scale HELD gratings have the potential to facilitate future 20-to-50-petawatt-class ultrafast laser systems. 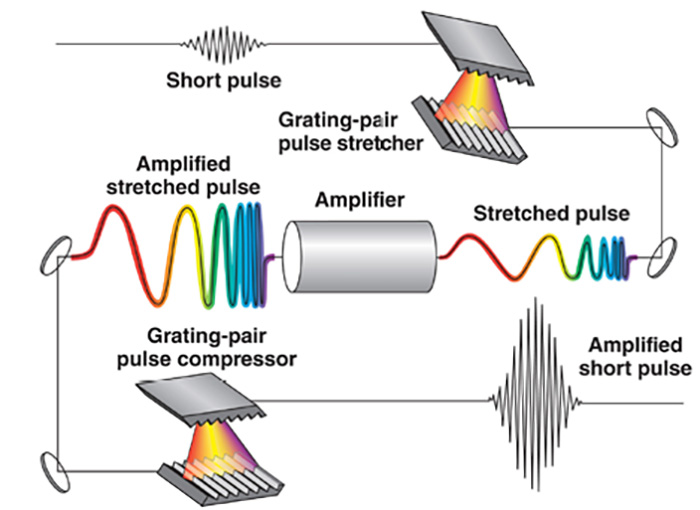 In chirped-pulse amplification, an ultrashort laser pulse is amplified to the petawatt level, with the laser pulse being stretched out temporally and spectrally, then amplified, and then compressed again. The stretching and compression devices (the gratings) that ensure different color components of the pulse travel different distances are susceptible to damage from redirecting beam pulses carrying petawatt loads. (Click to expand image.)

LLNL’s HELD gratings, which received a 2022 R&D 100 Award as one of the top 100 industrial inventions worldwide, can deliver 3.4 times more total energy than current state-of-the-art technology. They were developed in a collaboration involving LLNL’s Diffractive Optics Group, ELI-Beamlines, Spectra Physics–Newport of Milpitas, California, and National Energetics of Austin, Texas.

“The 85-by-70-centimeter HELD gratings, configured at a Littrow angle (the angle of maximum grating efficiency) of 37 degrees, allow for a larger beam width—62.5 centimeters,” he said. “Increasing the beam height to produce a square beam and accounting for the difference in LIDT (laser-induced damage threshold) results in approximately 3.4 times more total energy on the grating compared to the ARC high-dispersion, 76.5-degree angle of incidence grating design.

“The HELD grating’s excellent uniformity is due to a design with high efficiency over a large range of groove widths and heights and well-controlled dielectric layer thickness,” Nguyen added. Operating at the grating’s Littrow angle results in maximum diffraction efficiency and bandwidth but requires tilting the angle of the gratings so the beam reflects slightly upward, or out-of-plane. 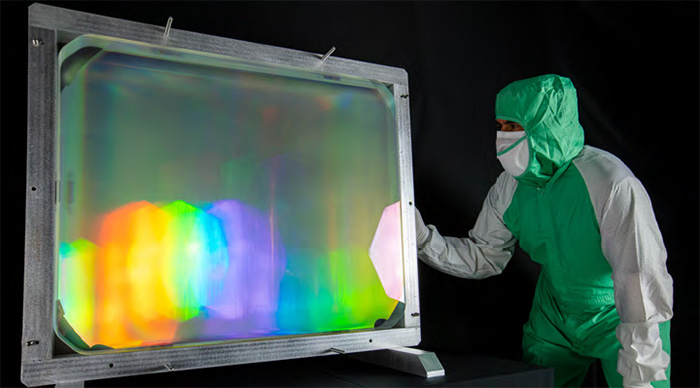 (Above) A technician inspects one of eight recently fabricated HELD gratings to be installed in the L4-ATON laser system’s 18-meter-long, 55-ton compressor (below).

Multilayer dielectric (MLD) gratings are composed of a base substrate upon which layers of dielectric mirrors with varying refractive indices are stacked, topped by a layer of ion-etched photoresist, a light-sensitive material that is fine-tuned to the desired diffraction specifications. MLD gratings can substantially enhance the diffraction efficiency of grating compressors over a large bandwidth, or range of frequencies. Unlike the metal used in traditional gratings, dielectric materials are non-conducting and can absorb 500 times less energy than previous designs.

L4-ATON was developed by a consortium led by National Energetics in partnership with laser manufacturer Ekspla of Vilnius, Lithuania, and ELI-Beamlines. The system uses technologies developed in collaboration with the University of Texas and LLNL for the Texas Petawatt Laser in Austin, such as optical parametric chirped-pulse amplification followed by high-energy amplification in neodymium:glass-disc amplifiers using two types of laser glass.

The HELD gratings are among three LLNL technologies receiving 2022 R&D 100 Awards. The others are:

In addition, Area Printing™, a technology developed by researchers from LLNL in collaboration with Seurat Technologies of Wilmington, Massachusetts, was named a finalist in the 2022 R&D 100 competition. Area Printing uses large-area pulsed laser powder bed fusion to flash-print one area of metal powder at a time, dramatically reducing production time and costs and opening up the possibility of revolutionizing industrial metal production in the United States.

With this year’s results, the NIF & Photon Science Directorate and its predecessor, the Laser Programs Directorate, have captured 66 R&D 100 awards out of a total of 176 won by the Laboratory since 1978. The awards will be presented at the R&D 100 Awards banquet in San Diego on Nov. 17.