In findings that could help advance another “viable pathway” to fusion energy, research led by LLNL physicists has proven the existence of neutrons produced through thermonuclear reactions from a sheared-flow stabilized Z-pinch device.

The researchers used advanced computer modeling techniques and diagnostic measurement devices honed at the Lab to solve a decades-old problem of distinguishing neutrons produced by thermonuclear reactions from ones produced by ion beam-driven instabilities for plasmas in the magneto-inertial fusion (MIF) regime.

While the team’s previous research showed neutrons measured from sheared-flow stabilized Z-pinch devices were “consistent with thermonuclear production, we hadn’t completely proven it yet,” said LLNL physicist Drew P. Higginson, one of the co-authors of a paper recently published in Physics of Plasmas.

“This is direct proof that thermonuclear fusion produces these neutrons and not ions driven by beam instabilities,” said Higginson, principal investigator of the Portable and Adaptable Neutron Diagnostics (PANDA) team that is doing research under a Department of Energy Advanced Research Projects Agency-Energy (ARPA-E) cooperative agreement. “It’s not proven they’re going to get energy gain, but it is a promising result that suggests they are on a favorable path.” 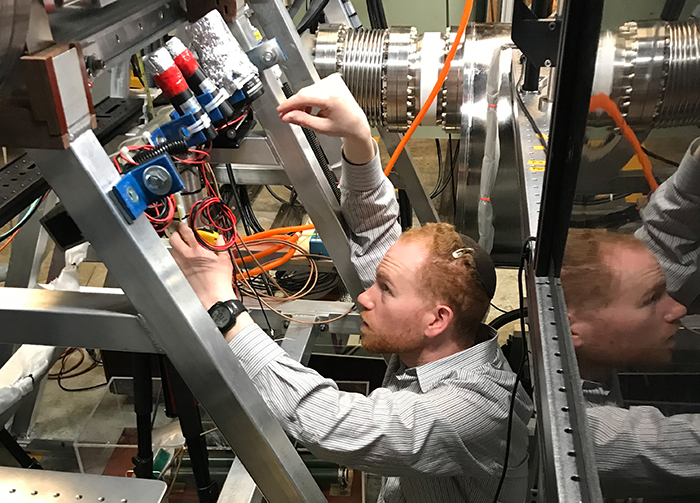 LLNL physicist James Mitrani was the lead author on the paper, which demonstrates how the Lab’s broad range of research is benefiting the larger fusion community beyond the major advancements made by NIF, the world’s most energetic laser system.

“The research only focused on this one device,” Mitrani said, “but the general techniques and concepts are applicable to a lot of fusion devices in this intermediate magneto-inertial fusion regime.” He noted that regime operates in the area between laser fusion facilities, such as NIF and the Omega Laser Facility at the University of Rochester, and fusion devices that confine plasmas in the purely magnetic regime, like ITER (a multinational project in southern France), SPARC (under construction near Boston), or other tokamak devices.

Since August, NIF has generated buzz throughout the global scientific community because an inertial confinement fusion (ICF) experiment yielded a record 1.35 megajoules (MJ) of energy. That milestone brought researchers to the threshold of ignition—defined by the National Academy of Science and the National Nuclear Security Administration (NNSA) as when a NIF implosion produces more fusion energy than the amount of laser energy delivered to the target. That shot was preceded by progress LLNL researchers made in achieving a burning plasma state in laboratory experiments (see “Nature: How Researchers Achieved Burning Plasma Regime at NIF”).

Fusion is the energy source found in the sun, stars, and thermonuclear weapons. NIF’s ICF experiments focuses 192 laser beams on a small target to compress and heat partially frozen hydrogen isotopes inside a fuel capsule, creating an implosion replicating the conditions of pressure and temperature found only in the cores of stars and giant planets and in exploding nuclear weapons. Z pinch machines accomplish fusion using a powerful magnetic field to confine and “pinch” the plasma.

The Z pinch concept is a relatively simple design that has existed as a theoretical model since the 1930s. But Higginson noted it had a long history of “terrible instabilities” that hindered the ability to generate the conditions needed to attain a net fusion energy gain.

In the 1990s, LLNL scientists began working with University of Washington researchers to advance another promising path toward ignition, the sheared-flow stabilized Z-pinch concept. Instead of powerful stabilizing magnets used in other Z-pinch devices, sheared-flow stabilized Z-pinch devices use pulsed electrical current to generate a magnetic field flowing through a column of plasma to reduce fusion-disrupting instabilities.

“The problem with instabilities is that they don’t create a viable path to energy production, whereas thermonuclear fusion does,” Higginson said. “It’s always been tricky to diagnose this difference, especially in a z-pinch.”

In 2015, LLNL and UW researchers were awarded a $5.28 million ARPA-E cooperative agreement to test the physics of pinch stabilization at higher energies and pinch current under the university’s Fusion Z-Pinch Experiment (FuZE) project. 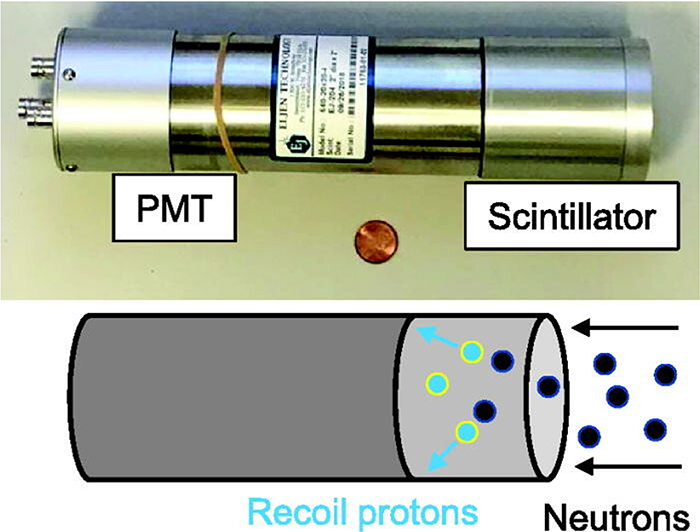 The top photo shows one of the scintillator detectors used for neutron measurements on the FuZE device. The bottom simplified schematic shows the physical mechanism for pulse generation in the detector, where recoil protons produced by fast neutron interactions generate light via excitation and ionization of the scintillating medium. The scintillation light is converted to an electric signal using a photomultiplier tube (PMT). (Click to expand)

Under a subsequent ARPA-E “capability team” cooperative agreement, LLNL researchers focused on diagnostics that measured the neutron emissions produced during the fusion process, including the spatial locations and time profiles of those emissions. Combining the plasma diagnostic expertise of national laboratories and the agile operation of private companies draws on each of their individual strengths and is a key objective of the ARPA-E fusion capability team program.

As the radius of the FuZE cylinder narrowed to increase compression, it would also create dips in the plasma that generated much stronger magnetic fields that would cause the plasma to pinch inwards more in certain spots than in others. Like the pinched ends of a popular tubular minced meat, those undesired “sausage” instabilities would create beams of faster ions that produced neutrons that could be confused with desired thermonuclear-produced neutrons.

LLNL researchers placed two plastic scintillator detectors outside of device to measure traces of neutrons as they emerged in just a few microseconds from different points and angles outside the Z-pinch chamber.

“We showed that emitted neutron energies were equal at different points around this device, which is indicative of thermonuclear fusion reactions,” Mitrani said.

The analysis included creating histograms of the neutron pulses detected by the two scintillators and comparing them using methods such as Monte Carlo computerized simulations that examine all possible outcomes.

The diagnostics aren’t new, Higginson said, but “the idea of using histograms of individual neutron pulse energies to measure the anisotropy—the difference in energies when you look in different directions—is a new technique and is something we thought of, developed, and implemented here. In addition, we have been working with UC Berkeley, which has helped us to develop the modeling capability to iron out the uncertainties in the measurements and completely understand the data we’re seeing. We’re not just looking through raw data.”

The paper, “Thermonuclear neutron emission from a sheared-flow stabilized Z-pinch,” was published in November and stemmed from an invited talk Mitrani presented at the American Physical Society-Division of Plasma Physics annual meeting in 2020.

The research spun off a privately funded Seattle startup named Zap Energy in 2017.

“We want to be involved because we don’t know what surprises might arise,” Higginson said. “It could turn out that as you go to higher current, all of a sudden you start driving instabilities again. We want to be able to prove as the current goes up that it is possible to maintain a high quality and stable pinch.”