LLNL Scientists Cheer Dawn of the ‘Era of Ignition’ 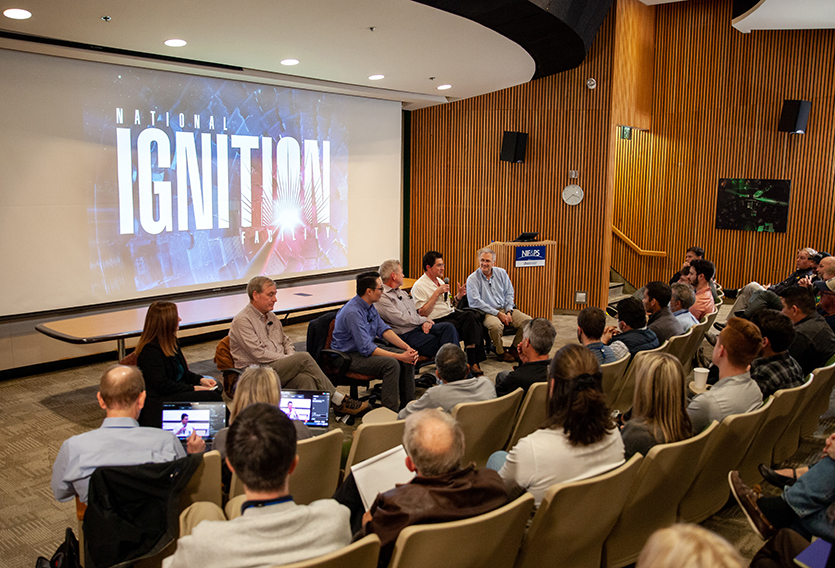 One crowded internal staff meeting held to discuss the potentially world-changing fusion energy breakthrough erupted in jubilant applause and shouts of joy when the gathering kicked off with a short video announcing NIF had indeed lived up to its middle name—“Ignition.”

“I feel fantastic, I'm just so proud of all these people,” said Tayyab Suratwala, program director for Optics and Materials Science & Technology. “To me, ignition is like an accumulation of a hundred miracles. There’s so many technological advancements and ingenuity that help make it happen.”

The excitement in the air was still palpable more than a week later on Dec. 13 as scientists, researchers, engineers, and support staff gathered in Lab auditoriums to watch the live video feed of a news conference as Department of Energy Secretary Jennifer M. Granholm made the public announcement that scientists performing an inertial confinement fusion (ICF) experiment at NIF produced more energy from the self-sustaining fusion reaction than they put in to create a condition known as ignition.

The audience burst into cheers when Granholm made the announcement and introduced LLNL Director Kim Budil, and applauded again when a panel of Lab experts talked about the results.

“We have taken the first step into the fusion age,” said a smiling Vincent Tang, NIF&PS principal deputy director. “Congratulations to all of us, this is a monumental achievement by the team. When I got out of grad school in magnetic fusion, I worried I wouldn't see this moment or something like it until I was near retirement. I am grateful to be  here when it happened.”

The ignition shot followed some six decades of work by generations of scientists who steadfastly pursued the goal of inertial confinement fusion.

“To answer that old question of, over those 60 years, what team would be the modern Prometheus to bring star fire to the Earth, and when would that time be — and it’s you and it’s now,” NIF&PS Principal Associate Director Jeff Wisoff said. 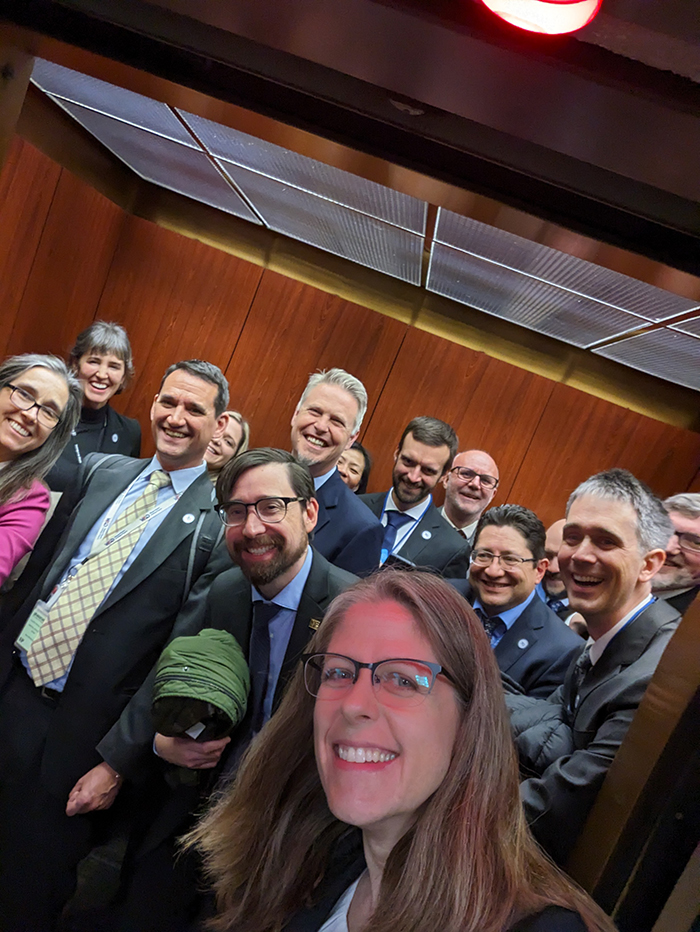 Outwardly, physicist Annie Kritcher, the experiment’s lead designer, seemed calm. But on the inside, she was jumping for joy.

“I couldn’t personally be happier,” Kritcher said. “I don’t even know how to really express my happiness. I’m a reserved person, so this is like my ‘10’ level of happiness.

“I feel kind of like I met my personal goals for my career,” she said. “All of these years, there’s been so many people who have dedicated their lives to this. It’s just so gratifying to check all the boxes and to achieve this official goal.

“And it’s big science, so to be able to do this with all the pieces pulling together is amazing. It’s like lighting the fusion match, and I just can’t wait to see where we and others take it in a year or two and to be a part of it.”

Physicist Alex Zylstra, the lead experimentalist, was still awake and at home when the shot occurred shortly after 1 a.m. Dec. 5. He tried to temper his excitement as the initial results came in because he wanted to be absolutely sure. He said he called a colleague on the phone “and told him to wake up and look at the data and take it down if it was wrong. He looked at it and it seemed to be right.”

Zylstra appreciated the implications of the moment. “We’ll see where the future takes us, but we’re all hopeful that at some point, there will be fusion on the (electric) grid providing power.”

Acting NIF Director Bruno Van Wonterghem, who is NIF’s longtime commissioning and operations manager, said during a Dec. 9 meeting that he has been waiting for this moment for his entire 30-year Lab career on NIF.

“Even though I never doubted NIF was going to reach ignition, all along we’d heard ‘ignition is 50 years away, it will always be 50 years away,’ ” Van Wonterghem said. “And this is the first time we can say ignition is five days behind us. It is the start of a whole new era, it is the era of ignition.”

The ignition shot “celebrates the unique talent and the capabilities that only the Lab can bring to bear to make the impossible possible,” he said.

Tammy Ma, who leads the Lab’s inertial fusion energy institutional initiative, said she was about to board a plane at San Francisco International Airport the morning after the shot to attend an annual fusion industry meeting.

“I got a call from my boss saying, ‘I think we got ignition,’ and I burst into tears,” Ma said. “I was jumping up and down in the waiting area. After all these years, every time I walk into the National Ignition Facility, I still get goosebumps. It’s a wonderful place to work and I’m so proud of this team.”

Ellie Tubman, a postdoctoral researcher working on backscatter diagnostics and other HED experiments at NIF, said she couldn’t believe it when she first heard the preliminary results of the shot.

“I even wondered if it was just a fluke and perhaps one diagnostic had read higher neutron counts in error,” she said. “But as the analysis of other diagnostics confirmed high neutron readings confirming it was real, it was amazing.”

Tubman said she was very honored to be part of such a passionate team, noting she joined the fusion effort because she loved both the challenge and opportunities the underlying science offered. “I hope this sparks more curiosity and interest from the wider community, bringing even more new faces and ideas to the team,” she said.

“I cannot think about a better place to be than at the Lab,” she said.

And former NIF Director Doug Larson, who retired from LLNL on Nov. 30, called it the “best retirement gift ever!”

The ignition milestone will also unleash a wave of new developments, including providing NIF with a new capability that bolsters its science-based Stockpile Stewardship Program to maintain the reliability, security, and safety of the U.S. nuclear deterrent, and expanding efforts to further explore inertial fusion energy research.

“The result certainly shows that a little more laser energy can go a long way,” Larson said, “and gives some strong motivation for NIF’s energy and power upgrade (to as much as 2.6 to 3 MJ later this decade) that is planned after we finish the NIF sustainment effort (a five-year plan to refurbish and upgrade critical NIF systems to sustain the facility through 2040).”

And as Tang added, “there’s so much left to do. This is the end of the beginning, not the beginning of the end.”