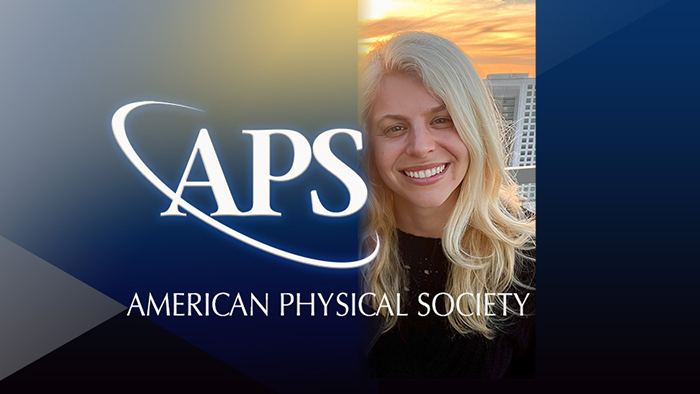 Christopherson was honored “for theories of fusion alpha heating and metrics to assess proximity to thermonuclear ignition in inertially confined plasmas, and for the development of a novel measurement of hot electron preheat and its spatial distribution in direct-drive laser fusion,” the APS stated in its citation.

“It is an honor to receive an award named after the extraordinary scientist Marshall Rosenbluth, whose brilliance laid the foundations for multiple fields within plasma physics. He set the bar impossibly high for the rest of us,” said Christopherson, whose research focuses on designing and modeling high yield inertial confinement fusion (ICF) experiments at NIF, the world’s largest and most energetic laser.

Christopherson said the accomplishments detailed in her thesis would not have been possible without the support of her adviser, Riccardo Betti, and colleagues at the University of Rochester’s Laboratory for Laser Energetics, who assisted with the research.

“Inertial confinement fusion is a team-oriented field and this award reflects their contributions as well,” she said.

Omar Hurricane, chief scientist for LLNL’s ICF program, was the co-nominee for Christopherson’s award and praised her contributions

“Marshall Rosenbluth was arguably the greatest fusion plasma theorist of his generation,” Hurricane said. “These days, in plasma physics, simulations have displaced theory, and the problem is particularly acute for ICF. As a result, there are very few true theorists being generated by plasma physics programs and fewer still in the subspecialty of ICF or high energy density physics. Alison is a rare exception, choosing to pursue theory as a graduate student and studying under another rare ICF theorist, Riccardo Betti.”

Hurricane said an important aspect of Christopherson’s theory work is that her findings have been tied to reality through experiments and cross-checked with simulations.

“The timing of Alison’s work has been very complimentary to our own work here at LLNL and has made an impact upon our thinking about the physics,” Hurricane said.

“Starting her graduate studies in 2013 was fortuitous timing because an untapped physics regime (of the transition to significant alpha-heating in experiments at NIF) revealed itself around that same time.”

The award consists of $2,000, a certificate, and a registration waiver for Christopherson to give an invited talk on her doctoral research at the annual meeting of the APS Division of Plasma Physics (DPP) in Spokane, Washington, in October. She will receive the award at the DPP awards banquet.

Christopherson received her B.S. in nuclear engineering and radiological sciences from the University of Michigan in 2013. As an undergraduate researcher, she worked at Michigan’s Center for Ultrafast Optical Science and at the Plasma Science and Technology Laboratory.

In 2013, she began her graduate career at the LLE with support from the Horton Fellowship. Under the supervision of Betti, her research interests covered a broad range of topics of importance to the field. She developed analytical models to study the physics of alpha-particle self-heating on implosion hydrodynamics, a physical definition for ignition in deuterium-tritium layered implosions, and techniques for inferring proximity toward ignition in inertial fusion experiments.

In 2020, she received her Ph.D. in mechanical engineering from the University of Rochester.