LLNL research scientist Federica Coppari was named a New Leader in Space Science by the U.S. and Chinese academies of sciences in recognition of her contributions to the field of planetary science. Coppari was co-leader of a team that presented the first experimental evidence of an exotic state of matter called superionic ice. 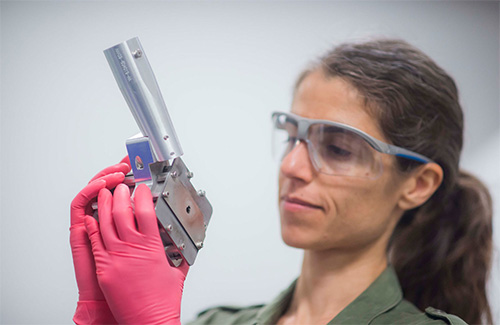 Federica Coppari with an x-ray diffraction image plate that she and her colleagues used to discover ice XVIII, also known as superionic ice. Credit: Eugene Kowaluk/Laboratory for Laser Energetics

Jointly organized by the National Space Science Center of the Chinese Academy of Sciences and the Space Studies Board of the U.S. National Academies of Sciences, Engineering and Medicine, the New Leaders in Space Science program was initiated in 2014 to identify and highlight the research achievements of the best and brightest early-career scientists currently working at the frontiers of space and planetary science.

Sixteen new leaders were selected by a joint selection committee composed of six distinguished senior scientists from Chinese and U.S. institutions, chaired by David Smith from the Space Studies Board (SSB).

Together with the other awardees, Coppari was invited to present her research at two forums held last May in Beijing (China) and in October in Washington, D.C. “It is such an honor to be recognized by the national academies of sciences for my work at the Lab,” Coppari said. “It highlights the importance of our research and the broad impact it has on the science community.”

Coppari’s lectures focused on the use of laser-driven compression and x-ray diffraction to recreate and probe the conditions existing deep inside planets.

In the first talk she discussed the experiments that verified the existence of superionic water ice (Ice XVIII) and its implications for the interior structures and magnetic fields of Uranus and Neptune. In the second presentation, she focused on massive exoplanets and discussed the consequences of the B1-B2 phase transition in magnesium oxide and iron oxide—two of the main constituents of the mantle of terrestrial planets—their miscibility (ability to mix to form a homogeneous solution), and their implications for the internal composition of extra-solar planets.

“I chose the topics of the two talks to give an overview of the broad capabilities of these emerging experimental techniques,” Coppari said. “It is very exciting to be able to contribute to a better understanding of the universe by measuring material properties at planetary interior conditions.”