The microprocessors at the heart of an increasing number of the world’s newest mobile phones and personal computers were made possible in part by Lawrence Livermore National Laboratory (LLNL) research into advanced lasers, optics and metrology, plasma physics, and supercomputing spanning the last three decades.

Apple’s lineup of iPhone 13 models, for example, are the latest mobile phones on the market powered by 5-nanometer (nm) microprocessors, which are manufactured using transistor-packing extreme ultraviolet (EUV) lithography. That technology can be traced to work done by LLNL, Sandia National Laboratories, and Lawrence Berkeley National Laboratory under a five-year, $250 million cooperative research and development agreement (CRADA) starting in 1997.

Over the five-year CRADA and subsequent years, Laboratory researchers worked on enabling technologies—multilayer coating science and technology, optics metrology, and research into sources of EUV light—that provided a foundation for EUV lithography (EUVL) to become a reality in high-volume semiconductor manufacturing today.

The method uses EUV light to etch features that are as small as a few nanometers into chips and processors.

ASML’s customers include silicon foundry giant Taiwan Semiconductor Manufacturing Co., which makes Apple’s A15 series of processors used for the iPhone 13 lineup introduced in September, as well as the M1 chips for the newest model MacBook Pro, MacBook Air, and Mac Mini computers. Samsung and Intel are also among ASML’s top customers. 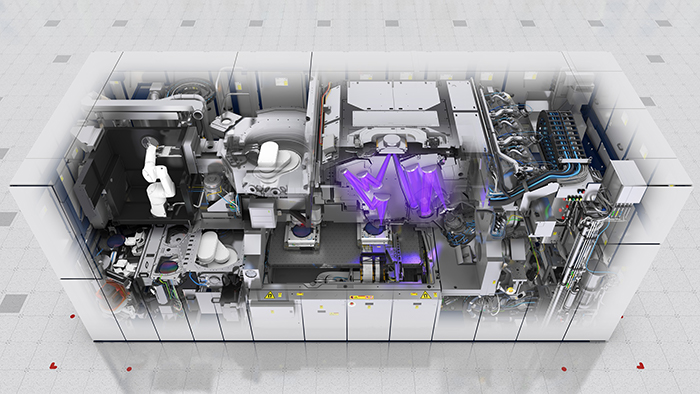 A cutaway drawing of an ASML EUVL machine. Credit: ASML

In 2012 and 2016, the Lab entered into CRADAs covering EUV light sources for lithography with ASML Holding NV, the Dutch-based firm that is the leading supplier of fabrication equipment to the world’s semiconductor industry. ASML researchers engaged with LLNL’s High Performance Computing Innovation Center and the NIF & Photon Science Advanced Photon Technologies Program to help improve the performance of EUV lithography by simulating ASML’s experimental data from its EUV light source.

“This is a representative case of multi-disciplinary teams of LLNL scientists, along with colleagues at other national labs, working to deliver a comprehensive solution, using leading-edge science and technology capabilities, with significant impact on commercial enterprises,” said William Evans, physics division leader in the Physical and Life Sciences Directorate. “The initial fundamental R&D research performed here and elsewhere was the seed that initiated implementation of these approaches in world-leading industrial-scale production at semiconductor foundries.”

Last year, Apple’s iPhone 12s became the first production mobile phones to use an EUV source to create chips with 5-nm features. This new technology allows the chip to be packed with about 11.8 billion transistors, each about 25 atoms across. Industry reports say other semiconductor companies are already working on 4-nm processes and beyond.

In a nutshell, EUVL uses pulses of high-intensity carbon dioxide lasers to heat tin droplets to temperatures at which they emit strong 13.5-nm EUV light. The EUV light allows vendors to pack more transistors onto a silicon wafer chip than is possible with the standard 193-nm sources currently used. The increased number of transistors allows Apple and other companies to put more computing power into their electronic devices.

For several generations, the wavelength of the light used in chip fabrication decreased as transistor size decreased. The industry looked to new technologies when it became apparent that traditional lasers operating at wavelengths shorter than 193 nm were not a viable option for the future. EUVL was one technology that long promised to push beyond those limitations by using a far shorter light wavelength of 13.5 nm. EUVL enables the cost-effective manufacture of smaller transistors.

“They didn’t have EUV power anywhere near enough to do what industry needed,” said LLNL computational physicist Steve Langer.

With a distinguished legacy of laser development and research, the Lab has enjoyed a long history with the EUV community. Research into the properties of optics and laser ultraviolet light has been one key facet in the development of NIF, the world’s largest and highest-energy laser. Inside NIF, specialized optics convert infrared laser light from 192 lasers to about 2 million joules of high-energy ultraviolet light and direct the beams to a peppercorn-sized target at the center of the Target Chamber.

NIF supports the National Nuclear Security Administration’s Stockpile Stewardship Program to maintain the reliability and safety of the U.S. nuclear deterrent without full-scale testing and to make important advances toward achieving ignition in inertial confinement fusion (ICF) experiments in the laboratory for the first time (see “NIF Experiment Puts Researchers at Threshold of Fusion Ignition”).

It turned out that HYDRA could also be used for EUV simulations. “The number of dimensions to looking at how one of these tin targets are working is daunting,” said physicist Craig Siders, NIF commercial technology development leader, “and you really have to tackle it with one of these supercomputer codes.”

That led to the 2016 CRADA with ASML. LLNL researchers also plugged into the Lab’s expertise in ensemble supercomputer simulations, which take in a wide variety of parameters, to further explore EUVL.

“This was the first ensemble simulation of EUVL sources that anyone’s ever done,” Langer said, “so it’s neat that we can take Lab technology developed for one purpose and apply it to another.”

The chip industry will likely continue to ask more questions about EUV.

“Can EUVL sources operate at shorter wavelengths and still deliver high average power?,” Langer asked. “Achieving that would be a big step towards continuing Moore’s Law increases in transistors per chip. I think Livermore will have a lot to say in these areas.”

And while the pursuit of laser-driven ignition and creating silicon wafers with EUV light might “look like very disparate things,” Siders said, “the scale of the laser challenge is actually very similar. That’s why the national labs are here, to do these kinds of things.”

“It’s great that we can buy a mobile phone that has a little bit of Livermore history encapsulated inside,” Siders said. “But the big payoff will be in a few years when we’ll be able to do our central Lab mission with computers that just absolutely could not have existed without this sort of technology.”