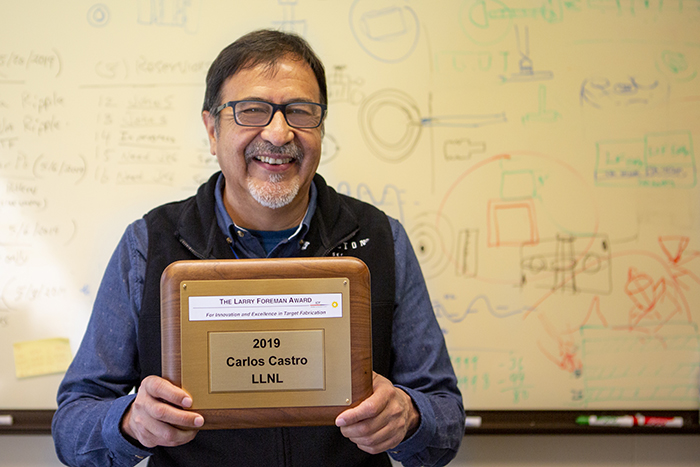 LLNL senior engineering associate Carlos Castro has won a special award from his peers around the world in recognition of a career’s worth of accomplishments in inertial confinement fusion target (ICF) making.

Castro, who works for the Defense Technologies Engineering Division, is the co-winner of the 2019 Larry Foreman Award for innovation and excellence in ICF target fabrication.

The U.S. Navy veteran was recognized for his body of work throughout his career, including developing precision machining and target assembly techniques that are used daily at NIF. His work has also supported the Omega Laser Facility at the University of Rochester’s Laboratory for Laser Energetics.

“I feel honored and humbled to get the award, especially after looking at the list of other people who have received it,” Castro said. “I’m proud to have done it.”

Nominations for the award come from the National Nuclear Security Administration (NNSA), the Laboratory for Laser Energetics and General Atomics, with voting done by lab target fabrication managers.

“During his long career in target fabrication, he has developed a number of critical techniques both in precision machining and assembly that have highly benefited the NNSA program and are in common use today,” said LLNL Target Fabrication Manager Abbas Nikroo. “He was part of the double shell machining and assembly effort for Omega in the 2000s, and he is still active in that area as this platform has moved to NIF.”

He has also worked on target fill tube assemblies and mirrored keyholes for multiple axis shock measurements that are critical to the understanding of ICF implosion symmetries.

Castro and Randall Blaine Randolph of Los Alamos National Laboratory (LANL) received the award in April at the 23rd Target Fabrication Meeting in Annapolis, Maryland. The conference, held every 18 months to two years, brings together target fabrication specialists from the various U.S. labs with their counterparts from Europe and Asia.

The award was named in memory of the late Larry Foreman, a renowned LANL fusion physicist who was also an Edward Teller Award recipient. The Foreman Award has only been handed out about every two years since 1999. Previous LLNL recipients were Russell Wallace, Robert Cook, Steve Letts, and Masaru Takagi. Other winners have included Pete Gobby, James Hoffer, and Robert Day of LANL, and Ken Schultz and Diana Schroen of General Atomics.

Castro has been a Lab employee for more than 20 years, which has been spread over three different stints since 1991, when he joined as a machinist apprentice. He’s also worked for Lawrence Berkeley National Laboratory.

One of the achievements he’s most proud of is helping to increase the number of ICF targets produced. In the early days of NIF, hand-assembly of targets would take six months.

“I learned how outside industry does things because they had to make a profit,” he said. “There, they go from concept to actual production a lot quicker.”

Increasing target production “was really a challenge,” he said. “I’m really proud of that time and the team that we had. I can say I had a small part in it. We worked long days. Sometimes we’d come in on the swing shift to get these things going.”

More recently, Nikroo said, Castro has been “a major force” in the development of equation of state (EOS) physics packages that require increasingly exacting standards for thinness and uniformity.

Castro worked for Schafer Livermore Laboratory from 2014 to 2017, making ICF targets for various institutions. He spearheaded work on developing planar targets for all the labs, Nikroo noted.

During that time, an LLNL engineer asked him asked him to make targets with a tolerance, or allowable deviation, of just 100 nanometers.

Castro said the engineer told him that physicists knew he could deliver because of what he’d already accomplished.

“He told me , ‘Because that’s how good the targets were that you gave us, and the physicists don’t want to go backwards. You’re a victim of your own success, so now you have to do it again,’ “ Castro said.

His most recent LLNL stint started in 2017 and “we’re now delivering EOS targets at 50 nanometers,” he said.

At that level, physicists now have the ability to obtain the data they seek with one shot instead of four.

“I’m really proud of that, too,” Castro said. 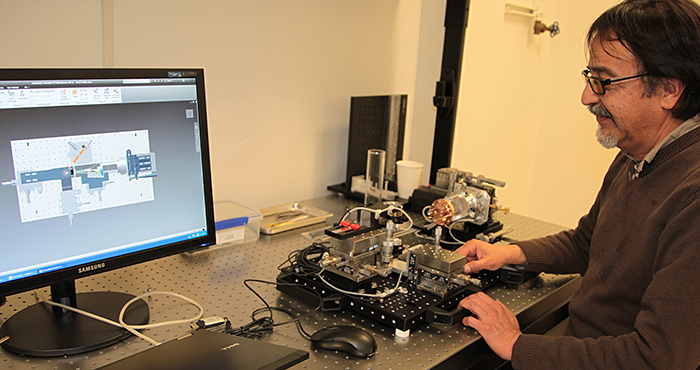 In this photo from 2013, Carlos Castro develops a multi-view target assembly.

The EOS assembly techniques are also used for x-ray diffraction experiments using Target Diffraction In Situ (TARDIS), which includes a NIF target and a diagnostic instrument on a single, integrated platform.

Diamond turning uses a precision lathe and a single-crystal diamond tool to machine metals a mirror-like finish and the precise required tolerances. The techniques Castro developed “will no doubt find wide applications beyond the work for these campaigns,” Nikroo said.

Castro is glad he happened to see a LLNL job ad for a machinist apprenticeship that ran one day in 1991 in the Oakland Tribune.

Castro had left his native Texas right after his high school graduation to join the Navy, where he served as a nuclear power plant operator and engine room supervisor on the cruiser USS Long Beach. When his tour of duty ended at the old Alameda Naval Air Station, he signed on with a Berkeley steel casting foundry.

Then he saw the LLNL want ad and began his apprenticeship making parts for the Lab’s Nova laser. He left the Lab in 1996, then returned in 2001 for a 13-year stint.

He enjoys working with the Lab’s multidisciplinary teams. Material scientists, for example, “can look at stuff down to the molecular level,” he said. “Normally you’re not going to get that in a machine shop on the outside. That’s what makes it special for me.”

And he’s still enthusiastic every day about working toward supporting NIF’s missions of nuclear stockpile stewardship and fusion energy research.

“It becomes why I get up in the morning and want to come in,” he said. “Knowing that’s what we’re doing becomes why we spend our careers on it and it feel good. So I’m definitely very proud to work here.”