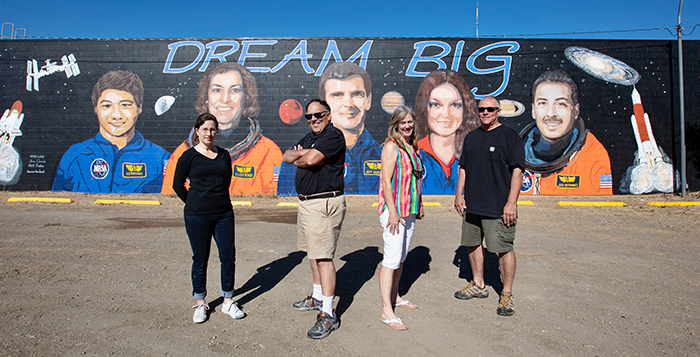 The team of muralists pose in front of the “Dream Big” mural they created to honor NASA astronauts with ties to Lawrence Livermore and Sandia national laboratories, the Livermore arts community, and the Tri-Valley area. They are, from left, Thomasin Dewhurst; Larry Lagin, a former deputy project manager with NIF; Anne Giancola; and Matt Finders. Credit: Jason Laurea. (Click to expand, use keyboard arrow keys to view all graphics.)

At the age of 10, Larry Lagin already knew he wanted to become a scientist—and his inspiration was NASA’s space program.

“It was the space program that really got me involved and excited to go into science,” said Lagin, former deputy project manager for NIF, the world’s largest and most energetic laser. “It was something that really inspired me.”

He even skipped school to watch the live TV broadcasts of the Mercury, Gemini, and Apollo missions at his home in New Jersey.

More than 50 years later, Lagin is now hoping to encourage new generations of students to “Dream Big”—the title of a mural in downtown Livermore that celebrates NASA astronauts with ties to the city, the Tri-Valley area, and Lawrence Livermore and Sandia national laboratories.

“It’s really not just about the astronauts,” Lagin said. “It’s about dreaming big, working hard, and if you do, you can achieve whatever you want. It’s really a great message, especially to send to kids. It’s something I feel very passionate about. And it kind of reminded me of my own experiences. I had a 40-year career as a scientist and as a manager.”

Surrounding the astronauts are depictions of planets, a Space Shuttle, the International Space Station, a rocket, the Milky Way, the Big and Little Dipper, the constellation Ursa Major, and the North Star. 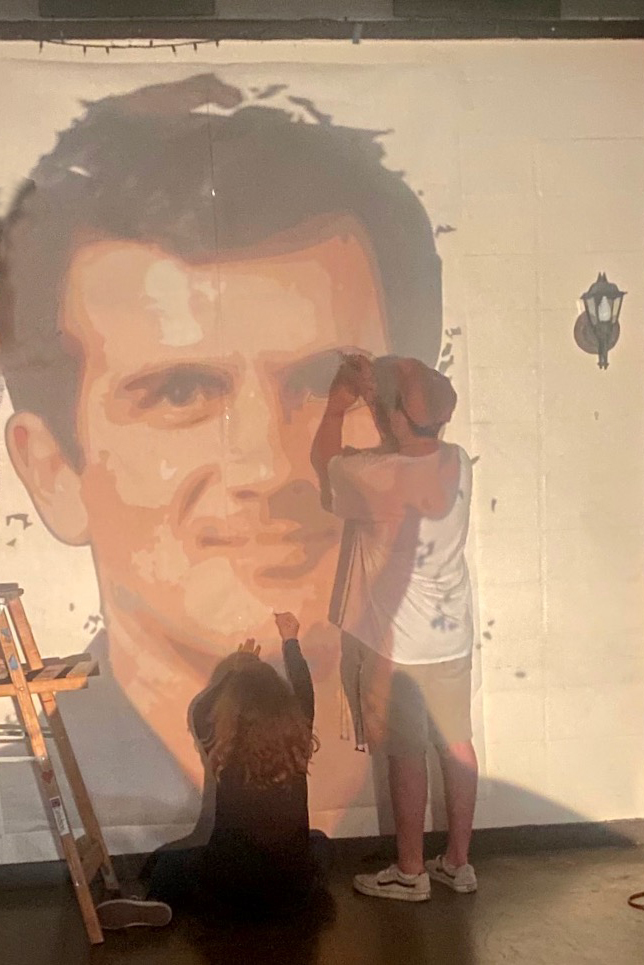 The muralists began the project by projecting the images of each astronaut’s face and torso on the wall in an art studio in the Bothwell Arts Center. This is the image of Jeff Wisoff, LLNL principal associate director of NIF & Photon Science. Credit: Larry Lagin

It literally took a village to create the mural, which was the result of “a confluence of several events,” said Alan Burnham, former deputy system manager for NIF final optics, former adjunct professor at Stanford University, and current LLNL contractor with M.H. Chew & Associates. Burnham cited his work with Chiao before coming to NIF as “a significant aspect of the inspiration” for the mural.

Burnham’s involvement with Livermore’s downtown redevelopment and his founding of what is now the Quest Science Center led to developing science exhibits for the 50th anniversary of the 1969 moon landing by the Apollo 11 astronauts.

As a result of the science exhibits, he met Wisoff and Jernigan and the couple’s son at a talk at a Boy Scout event at the Bankhead Theater. And he met Lagin, who developed and contributed an art piece for a “Sketches in Code” exhibit in 2020 at the Bankhead. The exhibit explored the role of mathematics in nature and art.

The idea for a mural came after Burnham bought a building in mid-2021 for potential use by Quest Science Center and other arts and technology nonprofit organizations.

“The building had a graffiti-covered wall that begged for a mural about some aspect of science and technology,” Burnham said.

After showing the mural concept to Don Sweeney, a LLNL retiree who is also active at Quest Science Center, Burnham met with Lagin and artists Anne Giancola from the Bothwell Arts Center and Thomasin Dewhurst. He also showed the concept to Hernández, who came up with the title “Think Big” in describing his inspiration to becoming an astronaut. 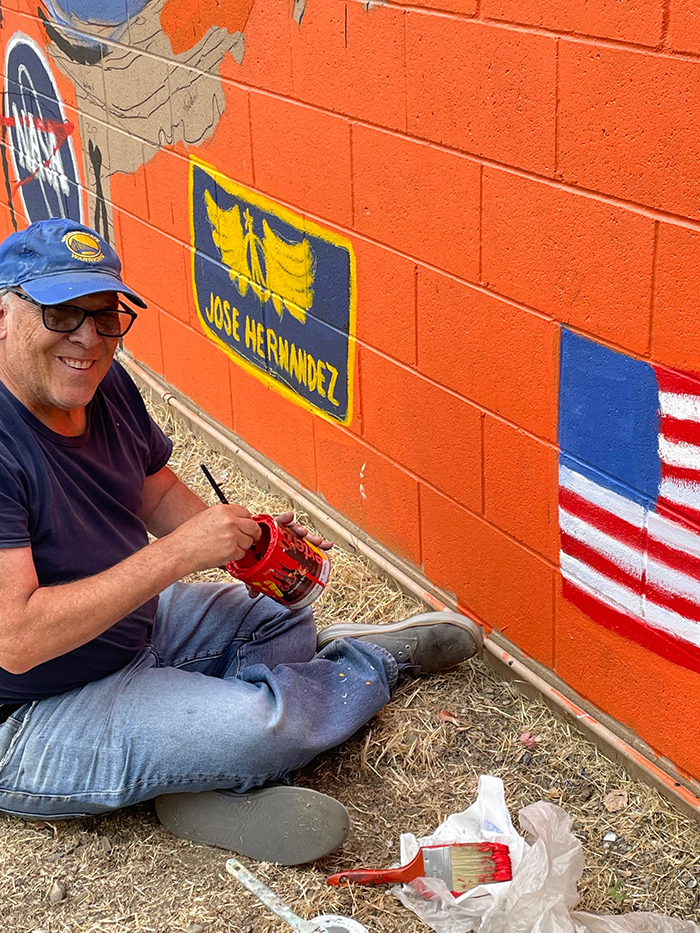 Lagin assembled the team of muralists—Giancola, Dewhurst, and Matt Finders. They began working on the mural in March in a studio in the Bothwell Arts Center, where they projected the face and torso of each astronaut’s image on mimeograph paper on the wall. They used pseudo colors for each image and charcoal for the contour lines around the images. The tedious process took several weeks.

“We had huge pieces of paper, all taped together,” added Dewhurst, “and we had to fix them to the wall as best we could in windy weather, and then transfer the images using thin carbon paper, which shifted and tore as we worked.”

“We looked at the image and said, ‘Well, it doesn’t look anything like the person,’ so we started painting the face first, and then we added all the details like the names of the NASA badges,” Lagin said.

They moved the project outside in April and began painting the mural—and ran into several challenges, including the hot weather’s effects on the paint and the sheer size of the project. Finders got on the roof to paint while the others used ladders.

“This mural was a challenge due to the format of creating very large portraits on a large wall,” Giancola said. “When you are working six inches from the surface, you have no idea if this thing you are painting actually looks like the side of the nose as you are hoping. It was a constant process of going up a ladder, climbing down to make sure it looked good from 20 feet away, and going up to move that nostril a few inches.”

Another challenge was working in the direct sunlight. The muralists risked sunburn and heat exhaustion and the paint would dry faster than they could get it on the wall, making it difficult to see the colors correctly. Dewhurst said that once the mural area was shady after 2 p.m., it was “peaceful and much cooler, and it was easy to see the colors, and the paint dried at a much more workable rate.” 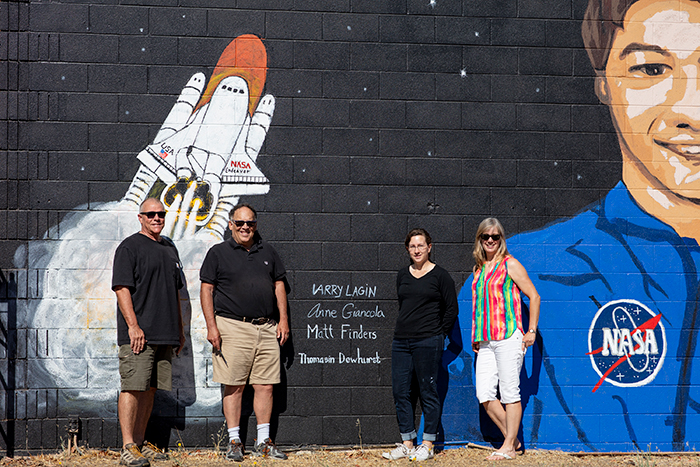 The muralists pose by their signatures on the mural. Shown, from left, are Matt Finders, Larry Lagin, Thomasin Dewhurst, and Anne Giancola. Credit: Jason Laurea

The mural was completed in July, much to the satisfaction of Burnham and all the muralists.

“I am proud that the mural is done by artists from the Livermore Valley and speaks to the residents and community of Livermore specifically,” Giancola said. “It’s got a hometown message delivered in a positive, visually appealing way.”

This was Finders’ first mural project and he was pleased with how it progressed with the four artists.

“I hope the mural conveys the message that Alan wanted,” he said. “Dream big, work hard, don't give up, and the sky is the limit.”

Burnham noted that the mural “also has a great display of diversity”—with a Mexican American, an Asian American, and two women—and he hopes that message comes across to viewers.

The mural will be the subject of a ribbon-cutting ceremony at 10 a.m. on Saturday, Sept. 24, by the Livermore Valley Chamber of Commerce. The astronauts, including Wisoff and Jernigan, the muralists, Burnham, and schoolchildren are among the VIPs scheduled to attend.