Fifth in a series of articles describing the elements of the National Ignition Facility’s 1.3-megajoule experiment.

Lawrence Livermore National Laboratory (LLNL) scientists set a high bar with the level of laser energy, accuracy, and consistency that was expected for the record-setting Aug. 8 experiment that brought researchers to the threshold of ignition. Thanks to the work of innovative National Ignition Facility & Photon Science laser system engineering, operations, and optic materials teams, NIF was more than up to the challenge.

NIF’s lasers delivered slightly more than the requested 1.9 megajoules (MJ) of laser energy at 440 terawatts (TW) of peak power for the shot that produced a historic 1.35 megajoules (million joules) of fusion energy. And the 192 beams hit precisely on target with the quality, shape, and exacting trillionths-of-a-second timing required.

The shot’s success didn’t happen overnight. Multi-pronged collaborations among the responsible teams have continued since the world’s largest and most energetic laser was built, said Steven Yang, leader of the BeamLine Integrated Performance (BLIP) group and co-leader of the Laser & Alignment System Engineering (LASE) group.

“It’s quite amazing we can accomplish this pulse shape with this level of accuracy for such a short pulse.”

Those efforts included a recent modernization of the Master Oscillator Room (MOR), where the initial laser pulse is born, a new computer modeling program that provides better control over the behavior of the beams, and improved technology for mitigating damage to laser optics.

“It’s all due to the work that we collectively did, including hardening the optics and deploying better laser technology,” Yang said. “Since the commissioning of the NIF laser, we have been working continuously on increasing the energy and power delivered to the target. It has been a long march to this type of level.”

Jean‑Michel Di Nicola, NIF’s Laser Systems Engineering leader, said the work reaching the threshold of ignition was built on “the shoulders of giants.”

That includes the teams of people who designed NIF, its computational models, its diagnostics, and “everybody else who contributed to get the laser performance where it is today, not just a few of us over the last year,” he said. “We’re constantly interacting, pushing the boundaries from all sides.”

Amplifying a single low-energy laser pulse from the MOR into 192 high-energy beams that are then focused into a pencil-eraser-sized target, the hohlraum, inside the Target Chamber is no small task. Along the journey, which encompasses about 1,500 meters in just 5 microseconds, the beams pass through about 7,500 meter-sized optics and 26,000 smaller ones that make NIF the world’s largest optical instrument (for more details, see “How NIF Works”).

LLNL scientists have previously compared the act of aiming those beams to a pitcher throwing a baseball from the pitcher’s mound at San Francisco’s Oracle Park into the strike zone at home plate at Dodger Stadium in Los Angeles, 350 miles to the south. To stretch that analogy further, the campaign of “hybrid” experiments that culminated in the record-setting shot would require that same pitcher to throw the ball on an predetermined trajectory while compensating for any known obstacles in the way, and then adjusting its speed as it zips through the strike zone and settles into the catcher’s mitt. 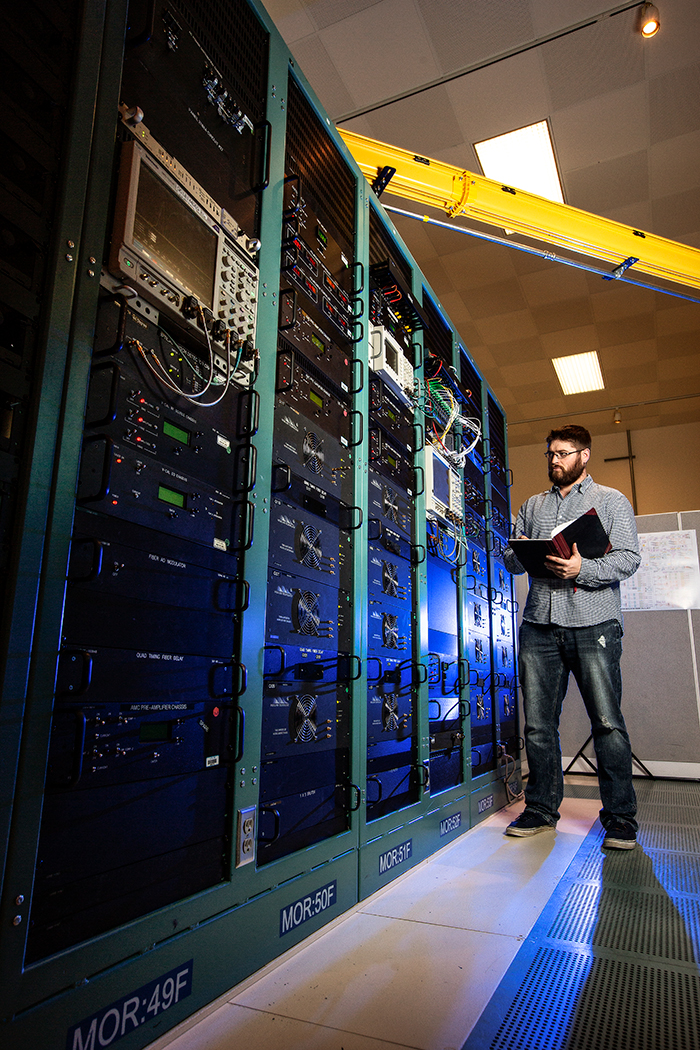 For the Aug. 8 shot, the strike zone became smaller because researchers reduced the two hohlraum laser entrance hole (LEH) apertures to just 3.1 millimeters to help confine more x-ray energy around the target capsule. This allowed the scientists to extend the duration of the laser pulse by a few hundred picoseconds (trillionths of a second) once it entered the LEHs.

In an inertial confinement fusion (ICF) experiment, the lasers heat the hohlraum, resulting in x rays that ablate the surface of a peppercorn-sized target capsule suspended in the hohlraum, triggering an implosion that compresses and heats the deuterium-tritium fuel mix inside until the hydrogen atoms fuse, releasing neutrons and other forms of energy.

Extending the pulse time shortened the “coast time” between when the laser shut down and the moment the imploded target capsule stagnated at maximum compression.

“A key way to make the implosion low-coast, which greatly increases the pressure and temperature in the fusion fuel, is to keep the hohlraum hot by leaving the laser on late,” said ICF Chief Scientist Omar Hurricane (see “Anatomy of a Milestone Experiment”).

Researchers have previously known that tweaking the wavelengths of certain beams would control the exchange of energy between the beams that cross each other—an effect known as cross-beam energy transfer (CBET)—as they entered the LEH. Starting with the Hybrid-E campaign in 2019, using larger capsules and low gas-fill, controlling CBET became another lever to reduce implosion asymmetries that detrimentally limited compression, pressure, and confinement time of the DT fuel.

But preparing the beams to arrive properly at the end of the journey starts at the beginning.

“You wouldn’t be able to recognize the pulse that we have to inject at the beginning of the laser to match the (scientists’) request at Target Chamber center,” Di Nicola said.

About two years ago, a team of top LLNL laser experts embarked on designing, testing, and deploying a new MOR architecture, from the oscillator to the pulse-shaping system input. The modernization included taking advantage of new fiber-optic technology not available when the original MOR was built 20 years ago.

The upgrades have improved the shot-to-shot consistency of the laser’s performance by about three times, a key for fine-tuning laser power balance and accuracy and providing more flexibility to turn CBET from a liability into an advantage. That consistency aided physicists when designing and modeling experiments.

The laser improvements “did remove a lot of uncertainty about what we were doing, reduced the complexity of all the things we had to worry about,” Hurricane said. “Those fixes did seem to correlate with our great progress on the physics side.”

The team was recently honored with a National Nuclear Security Administration (NNSA) Defense Programs Award of Excellence for its work on the “design and implementation of the novel master oscillator system for improved control of stewardship experiments on NIF.”

“It was one of the highlights of my 12-year career at LLNL to lead such an outstanding team that delivered a major upgrade for NIF,” Di Nicola said.

“This is a very, very exciting time.”

The laser pulses are generated in the MOR and injected into a complex system of laser amplifier glass, flashlamps, and related components. The system—spread over two laser bays, switchyards, and final optics assemblies in the Target Bay—splits, amplifies, and focuses the beams.

The laser amplification process causes damage to those optics. So optical materials experts have devised technologies and techniques to protect the optics or mitigate the damage. Those measures have allowed NIF to operate at a routinely sustainable energy level of 1.9 MJ and, once, as high 2.15 MJ in a laser test; both exceed its original design specification of 1.8 MJ. The team is working toward giving experimenters a greater than 2 MJ capability by late next year. 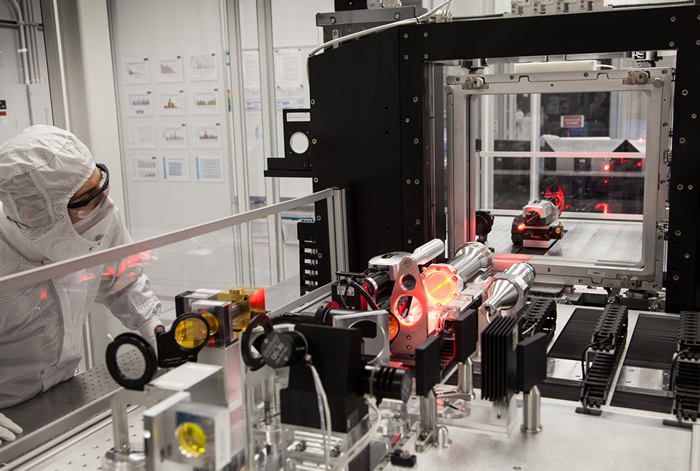 “There has been this series of very important technologies that have helped enable these optics to be survivable so that NIF can operate the way it does today,” said Tayyab Suratwala, program director for Optics and Materials Science & Technology.

Suratwala credits the development of techniques that enabled fabrication of NIF’s fused silica optics to minimized damage caused by imperfections on their surfaces. NIF also developed the Advanced Mitigation Process (AMP), a patented chemical method that made the surfaces more damage resistant by removing impurities and absorbing microfractures.

Suratwala cited the more recent development of three technologies to manage the damage-inducing debris and shrapnel generated by the high-velocity shots: 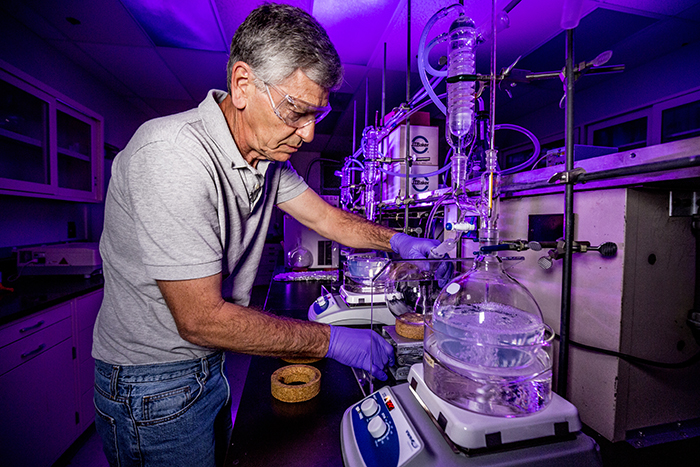 “The progression of that set of technologies is allowing NIF to do both more shots as well as doing higher power and energy shots,” Suratwala said.

The laser and optics teams work closely together to take full advantage of these improvements.

“We talk to each other a few times a week, both in terms of the day-to-day behavior of the laser system as well as for developing new capabilities,” Suratwala said. “That requires a very strong partnership of not just the laser systems engineering group, like Jean-Michel Di Nicola and Stephen Yang, but also the operations folks, people like Stanley Sommer and Tom Kohut and their teams.”

In addition, the installation of a code called the Virtual Beam Line++ (VBL++) in 2019 provided a powerful new tool to use the Laboratory’s High-Performance Computing platform to simulate how the laser performs (see “LLNL’s Virtual Beam Line ++ Now Available to Users”).

“After we shape the pulse, we have to model the distortions and characterize them,” Di Nicola said. “That’s a thing that few people realize that we have to do. That’s what the virtual beam line is for. It does all the diffractions, amplifications, non-linear optics, behavior of the light. We want to know what to inject to get the pulse that the experimentalist wants at the end of the laser. 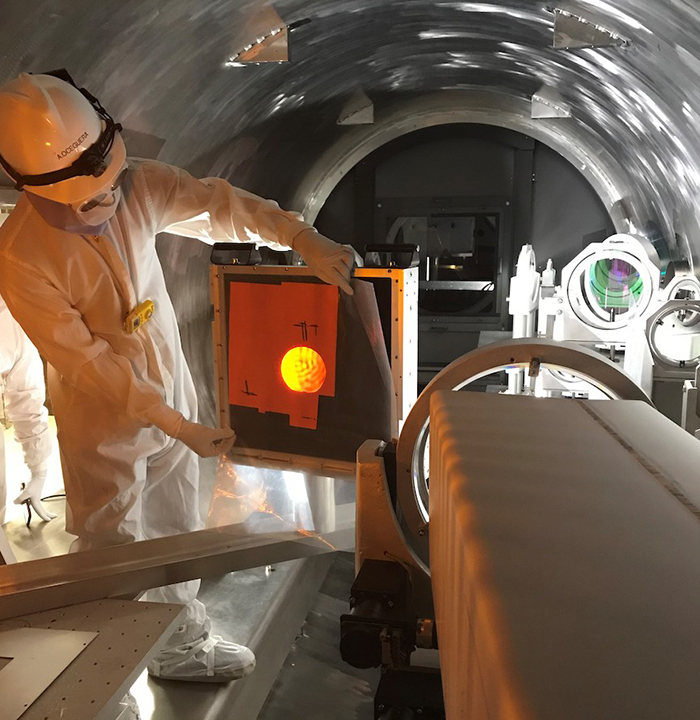 “It’s quite amazing we can accomplish this pulse shape with this level of accuracy for such a short pulse,” he said.

This year NIF also completed recommissioning the Precision Diagnostic System (PDS), which has an array of scientific measurement tools to help test ways to increase laser performance without risking the main system (see “New Laser Testing System Brings NIF Back to the Future”).

And Yang said the addition of a new calorimeter inside the Target Chamber provides another tool to ensure the laser is performing as designed.

“It doesn’t impact the laser delivery per se, but it does give us confidence that what we’re reporting now is the actual number,” Yang said. “When we say 1.92 megajoules, we know with a very small uncertainty that is the number.”

Suratwala started his career at the Lab just as construction began on NIF, so he’s heartened by all the advancements that have brought scientists to the edge of ignition.

“I’ve seen it go from dirt to what it is today,” he said. “This is a very, very exciting time.”