Ironing Out the Interiors of Exoplanets 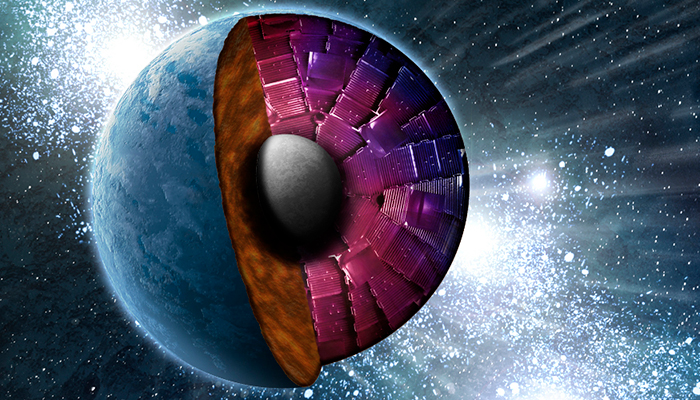 An artist’s conception of the cross section of a super-Earth with the NIF target chamber superimposed over the mantle, looking into the core. Credit: John Jett

The discovery of more than 4,500 extra-solar planets has created a need for modelling their interior structure and dynamics. As it turns out, iron plays a key role.

LLNL scientists and collaborators have used NIF’s lasers to experimentally determine the high-pressure melting curve and structural properties of pure iron up to 1,000 GPa (nearly 10 million atmospheres), three times the pressure of Earth’s inner core and nearly four times greater pressure than any previous experiments. The research appears in Science.

The team performed a series of experiments that emulate the conditions observed by a parcel of iron descending toward the center of a super-Earth core. The experiments were allocated as part of the NIF Discovery Science program, which is open-access and available to all researchers.

“The sheer wealth of iron within rocky planet interiors makes it necessary to understand the properties and response of iron at the extreme conditions deep within the cores of more massive Earth-like planets,” said Rick Kraus, LLNL physicist and lead author of the paper. “The iron melting curve is critical to understanding the internal structure and thermal evolution, as well as the potential for dynamo-generated magnetospheres.”

A magnetosphere is believed to be an important component of habitable terrestrial planets, as it is on Earth. Earth’s magnetodynamo is generated in the convecting liquid iron outer core surrounding the solid iron inner core and is powered by the latent heat released during solidification of the iron.

With the prominence of iron in terrestrial planets, accurate and precise physical properties at extreme pressures and temperatures are required to predict what is happening within their interiors. A first-order property of iron is the melting point, which is still debated for the conditions of Earth’s interior. The melt curve is the largest rheological transition a material can undergo, from a material with strength to one without. It is where a solid turns to a liquid, and the temperature depends on the pressure of the iron.

Through the experiments, the team determined the length of dynamo action during core solidification to the hexagonal close-packed structure within super-Earth exoplanets.

“We find that terrestrial exoplanets with four to six times Earth’s mass will have the longest dynamos, which provide important shielding against cosmic radiation,” Kraus said.

Kraus added: “Beyond our interest in understanding the habitability of exoplanets, the technique we’ve developed for iron will be applied to more programmatically relevant materials in the future,” including the National Nuclear Security Administration’s Stockpile Stewardship Program.

The melt curve is an incredibly sensitive constraint on an equation-of-state model.

The team also obtained evidence that the kinetics of solidification at such extreme conditions are fast, taking only nanoseconds to transition from a liquid to a solid, allowing the team to observe the equilibrium phase boundary. “This experimental insight is improving our modeling of the time-dependent material response for all materials,” Kraus said.

The work is funded by LLNL’s Weapon Physics and Design Program and NIF’s Discovery Science program.

“Probing the Possibility of Life on ‘Super-Earths,’” NIF & Photon Science News, May, 2017