Second in a series of articles describing aspects of the National Ignition Facility’s record-breaking 1.3-megajoule experiment.

Designing the experiment that brought the National Ignition Facility (NIF) to the threshold of ignition on Aug. 8, 2021, was a multiyear problem-solving effort aimed at firing enough laser energy into the hot spot at the center of a NIF target capsule to trigger a self-sustaining burn wave of fusion reactions.

It was anything but easy. Inertial confinement fusion (ICF) researchers pursued a wide variety of experimental approaches over the course of a decade in looking for ways to maximize the energy delivered by NIF’s lasers in the hohlraum, the capsule, and the hot spot (see “How NIF Targets Work”). Those efforts culminated in the record-breaking shot that generated more than 10 quadrillion watts of fusion power for 100 trillionths of a second.

“The ICF program has steadily advanced our physics understanding and the technology over the last decade to improve performance,” said ICF Chief Scientist Omar Hurricane. The record shot “built on a decade of research by an incredible team across the Lab and the wider community.”

The shot was part of a series of “hybrid” (high-yield big-radius implosion design) experiments on NIF that couple the best elements of previous high-yield experiments with new understanding of the implosion process informed by rapid advances in diagnostic and modeling technology.

“This is a huge advance for fusion and for the entire fusion community.”

The strategy applies this knowledge in a new design with the largest capsule size that can be fielded symmetrically within NIF’s current experimental limits while maintaining other important implosion properties.

The experiment’s success “demonstrates that NIF can provide access to the physics regime around ignition,” said Lawrence Livermore National Laboratory (LLNL) physicist Annie Kritcher, lead designer for the Hybrid-E experiments, the latest in the hybrid series. “Creating these conditions in the laboratory will significantly advance our understanding of what it takes to achieve energy gain higher than required to initiate the reactions and provides access to a new experimental regime that was previously unattainable.” 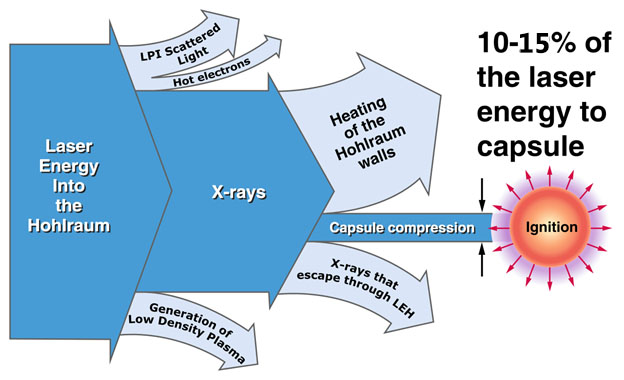 Simplified flow diagram showing NIF target capsule energy-coupling efficiency. The “laser energy” shown is after wavelength conversion from infrared to ultraviolet, which loses about half of the laser’s original energy. When the light reaches the hohlraum, it heats the inner walls and generates x rays that compress the fusion fuel, using up more than half of the 1.9 megajoules of ultraviolet light. After accounting for x-ray energy lost through the laser entrance holes (LEH), laser-plasma interactions (LPI) and backscatter, and other factors, in earlier experiments only about 150-270 kilojoules was absorbed by the capsule, and only about 10 kilojoules ended up in the fusion fuel. (Click to expand)

Although NIF is the world’s largest, highest-energy laser system, almost all the energy from the facility’s 192 laser beams is lost to wavelength conversion, x-ray production, backscatter, and other factors before it reaches the capsule. The concentration of energy in the hot spot is one key to obtaining high levels of fusion performance and reaching the conditions required for ignition. Ignition is achieved when the heating power from alpha particles produced by fusion reactions in the hot spot overcomes the cooling effects of x-ray losses, electron conduction, and implosion expansion, causing a self-heating feedback loop in the fusion fuel and an explosive amplification of energy output (see “Anatomy of a Milestone Experiment”).

Fluid instabilities, asymmetries, electron heating, hot-spot drift, and other “non-ideal factors” tend to “steal energy away from the system and waste it in various ways,” Hurricane said.

“Hot-spot drift and asymmetry prevent the kinetic energy of the implosion from being fully converted into internal energy at peak compression,” he said. “That’s basically wasted energy.”

Other factors that have degraded capsule implosions include the mixing of capsule material with the fusion fuel, target capsule surface “pits,” subsurface “voids” and thickness inconsistencies, and instabilities caused by the “tents” that suspend the capsule inside the hohlraum and the fill tube used to inject fuel into the capsule. These elements “take energy and turn it into x rays,” Hurricane said, “and it’s lost from the system through x-ray emission.”

The hybrid strategy is part of a multipronged NIF effort to couple more laser energy to the hot spot. It features new target designs that pair larger high-density carbon (diamond) capsules with smaller or reconfigured hohlraums as well as new laser pulse shapes aimed at enhancing the radiation temperature in the hohlraum. The Hybrid-E experiments recorded the highest coupled energy to the hot spot yet achieved while maintaining the high stagnation pressure required for good performance. 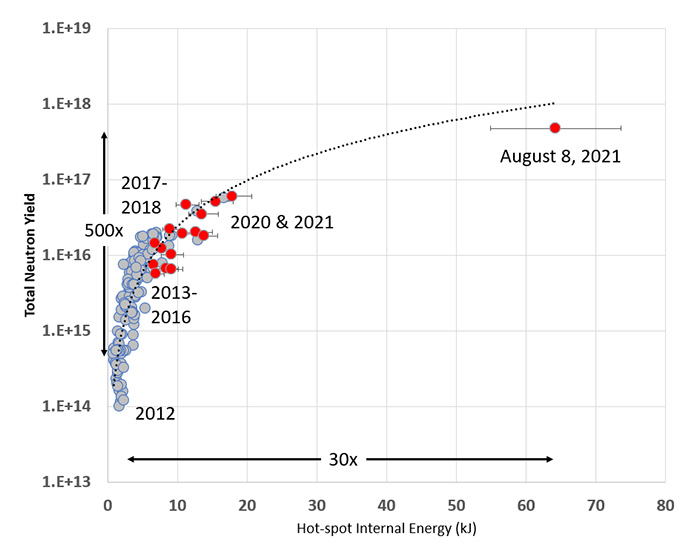 The relationship between hot-spot energy and neutron yield in NIF deuterium-tritium (ignition) experiments from 2012 through early 2021, with the highest-performing shots occurring in 2020 and 2021 (red dots indicate Hybrid-E shots). While not the only important variable—high hot-spot pressure is also important—the chart shows that doubling the hot-spot energy increases yield by a factor of four, demonstrating the importance of hot-spot energy to the success of NIF implosions. The Hybrid-E experiment on Aug. 8 achieved a hot-spot absorbed energy of about 65 kilojoules (kJ)—about 20 kJ from the implosion, and the rest from “self-heating” from the fusion reactions.

“The strategy is to increase the capsule scale while you maintain the other key parameters such as velocity, adiabat (determines the compressibility of the fusion fuel), coast time, stability, and symmetry,” Kritcher said. She noted that larger capsules are more challenging to implode symmetrically, especially in more efficient smaller hohlraums filled with a low level of helium gas (in previous campaigns, the gas was used to help control the growth of a ”bubble” of hohlraum wall material that interfered with energy distribution). Low gas-fill hohlraums, however, provide the highest-performing implosions and reduce backscatter losses and hot-electron production, especially when also using a technique to improve energy distribution and shape control known as cross-beam energy transfer, or CBET.

In CBET, the laser beams exchange energy as they overlap in the laser entrance holes. Slightly changing the wavelength of one or more sets of beams “moves energy from one set to another,” said Hybrid-E lead experimentalist Alex Zylstra. “The amount of energy transfer can be tuned to balance the x-ray drive symmetry” so that energy is evenly distributed throughout the x-ray “oven” inside the hohlraum. 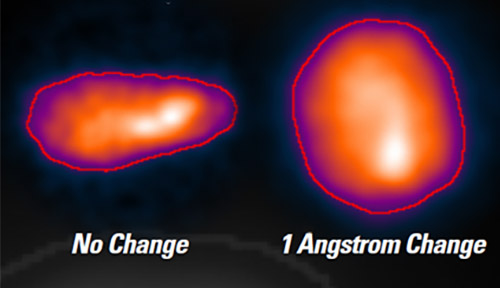 In a March 2019 experiment, the wavelength of the laser light on a subset of beams was changed by one angstrom (one ten-billionth of a meter) and produced the result shown on the right. Hybrid-E is the first campaign to employ this trick in a low-gas-filled hohlraum with a diamond capsule, which is key for managing backscatter of laser light from the hohlraum.

The Aug. 8 shot benefitted from a simplified data-based model developed by LLNL physicist Debbie Callahan, a co-creator of the Hybrid-E strategy, to guide design choices. “We used the data-driven model to make tradeoffs of different properties of the design to get us in the right ballpark of symmetry control,” Hurricane said.

The larger capsules—about 15 percent bigger than those used in previous high-yield experiments—are needed because a key parameter for ICF designs is the ratio of the hohlraum size to capsule size, called the case-to-capsule ratio (CCR). A smaller CCR enhances energy efficiency, Zylstra said, but makes it more difficult to control other aspects of the shot such as the symmetry of the x-ray drive on the capsule. 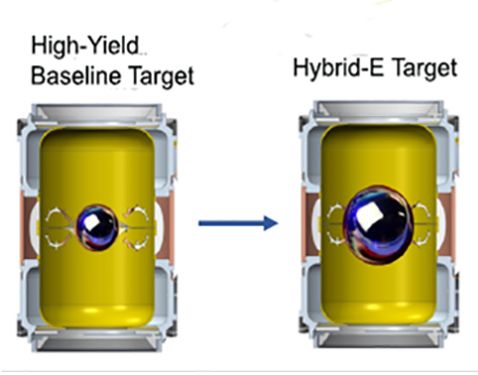 Comparison of a target used in previous high-yield experiments with a Hybrid-E target, which uses a capsule with a 15 percent larger radius and a slightly smaller hohlraum.

“By fielding these larger capsules at relatively small CCR,” Zylstra said, “we increase the coupling efficiency from laser energy to capsule-absorbed energy while controlling the implosion symmetry using wavelength detuning to control cross-beam energy transfer in the hohlraum. This new design results in record values of the implosion kinetic energy and internal energy of the fuel at stagnation.”

The Hybrid-E design was informed by terabytes of data from NIF’s suite of dozens of state-of-the-art nuclear, x-ray, and optical diagnostics, which dissected every aspect of the more than 170 DT experiments conducted since 2011 (see, for example, “Nuclear Diagnostics Help Pave the Way to Ignition on NIF”). Those data were analyzed to improve understanding and used to enhance the predictive ability of implosion computer models.

The 1.3-megajoule experiment also benefitted from efforts to increase the initial energy and energy balance of the NIF laser beams and improve the surface smoothness and thickness consistency of target capsules through new fabrication, metrology, and polishing techniques and innovative, more stable capsule designs.

“To create the extreme conditions needed to achieve ignition,” Kritcher said, “these experiments require a great deal of precision in many aspects of the experiment, including laser delivery, target fabrication, and control of the symmetry of the imploding pellet and hydrodynamic instabilities. Many aspects need to come into place for the best experimental conditions, regardless of the intended design.”

Anatomy of a Milestone Experiment

Here are the key factors that led to the success of NIF’s 1.3-megajoule experiment: 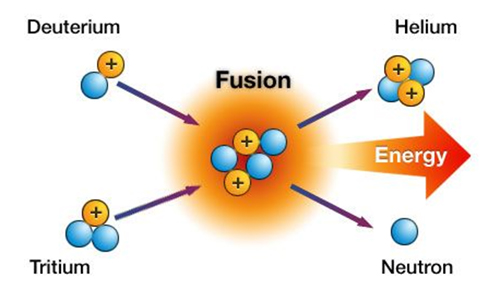 In a fusion reaction, nuclei of the two isotopes of hydrogen, deuterium (containing one neutron and one proton) and tritium (two neutrons and one proton), are forced together by extremes of temperature and pressure and fuse to form a helium nucleus. In the process some of the mass of the hydrogen is released as energy.


“The latest breakthrough was the result of a decade of scientific learning and progress, and key advances over the last two years in design, targets, diagnostics, modeling, and the NIF laser.” 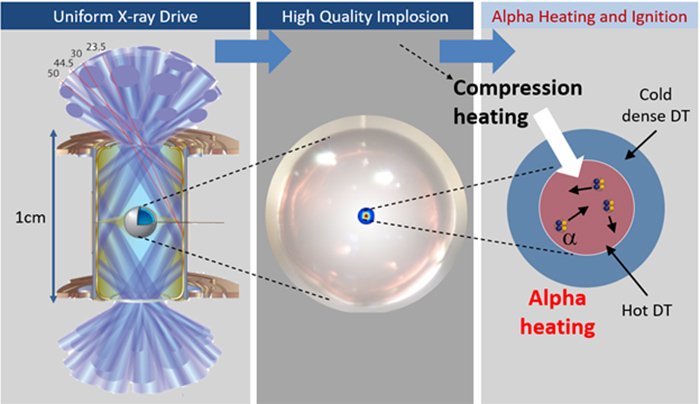 Illustration of alpha heating in a standard NIF target. (Click to expand.)

“Self-sustaining burn is essential to getting high yield,” Callahan said. “The burn wave has to propagate into the high-density fuel in order to get a lot of fusion energy out. This is a huge advance for fusion and for the entire fusion community.”

The result: The shot produced an unprecedented 4.8×1017 (480 quadrillion) neutrons and 1.35 megajoules of fusion energy yield, eight times NIF’s previous energy record set by a Hybrid-E experiment in February, and 25 times the record from an HDC experiment in 2018. And it was about 70 percent of the energy needed to meet the formal definition of ignition established by the National Academy of Science in 1997.

“This (ICF) has been a continuous learning process,” Kritcher said. “Future experiments aim to understand the new physics regime we have recently accessed through advanced diagnostics and assessing performance reproducibility. Future work also includes continuing to improve on the recent results by increasing the compression of the fuel and improve implosion efficiency by minimizing perturbations and continuing to develop the radiation drive.” 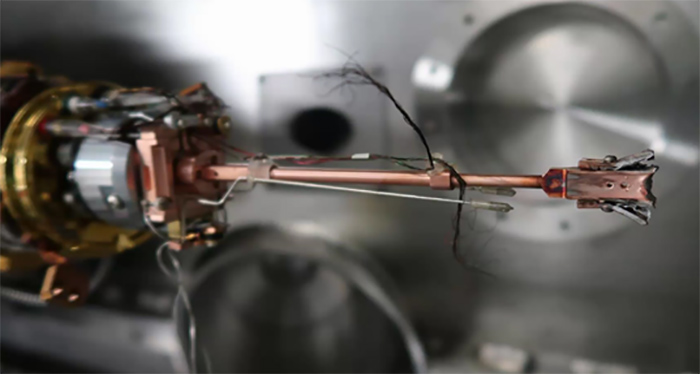 The Hybrid-E target after the shot. (Click to expand)

Also contributing were collaborators from Los Alamos and Sandia national laboratories, the Nevada National Security Site, General Atomics, the Laboratory for Laser Energetics at the University of Rochester, the academic community, industry, DOE and NNSA, and many other NIF partners in the fusion, plasma, and high energy density science communities.

“On the Threshold of a Critical Milestone,” Science & Technology Review, April, 2019

“A simple model to scope out parameter space for indirect drive designs on NIF,” Physics of Plasmas, July 8, 2020