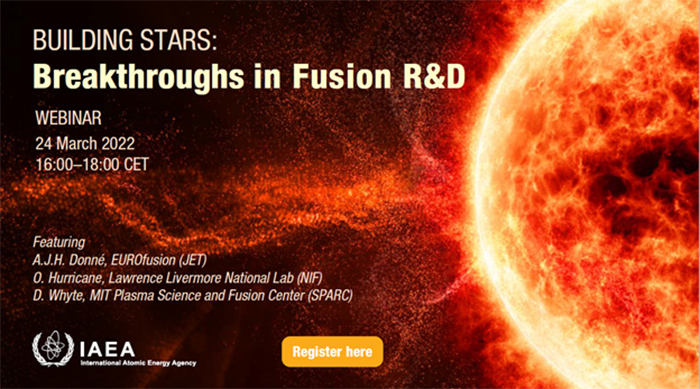 “It was an honor to take part in this webinar,” Hurricane said, “and to highlight the accomplishments of LLNL, NIF, and the results of the August shot that produced nearly six times more fusion energy than the energy absorbed by the target capsule.”

In his talk, Hurricane summarized the many challenges ICF researchers had to overcome, such as implosion instabilities and asymmetries, mixing of target capsule material with the fusion fuel, and perturbations caused by the “tent” that suspends the target capsule in the hohlraum and the tiny tube that fills the target capsule with deuterium-tritium fuel (see “How NIF Works”).

An ICF implosion is “actually very energy-inefficient,” Hurricane said. “You’re using the implosion to squeeze the fuel and obtain high temperature and density. Typically in our experiments, we develop pressures of 100 to 200 megabars, or million atmospheres, of pressure on the outside surface of our capsule, and the implosion amplifies the pressure inside the fusion fuel to over 400 gigabars (billion atmospheres)—more than twice the pressure at the center of the Sun.

“(But) as we are delivering laser energy into the hohlraum and then to the capsule, we are losing energy pretty significantly; we’re trading that energy away for energy density” in the hot spot, he said.

A key to the record experiment’s success, he said, was finding ways to deliver enough kinetic energy from the implosion into the target’s central hot spot to produce a self-sustaining fusion reaction. In this process, the alpha particles (helium nuclei) produced by fusion reactions in the hot spot deposit their heat in the hot spot and into the surrounding cold fuel, “greatly increasing the fusion energy production rate and exceeding the kinetic energy used to get it hot in the first place,” he said. NIF shots in 2020 and 2021 achieved this burning plasma state for the first time in a laboratory experiment. 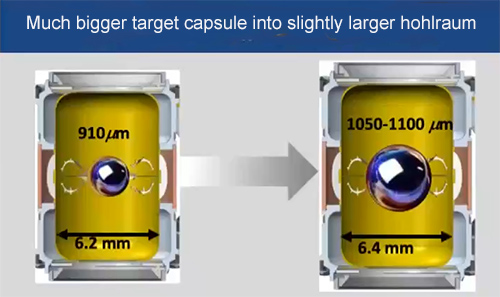 Comparison of a target used in previous high-yield NIF experiments with a target used in the Aug. 8 shot. The capsule has a 15 percent larger radius and is suspended in a slightly larger hohlraum. (Click to expand)

To improve energy coupling in the implosion, the ICF researchers increased the size of the target capsule so it can absorb more energy, reduced the aperture of the laser entrance holes to retain more energy in the hohlraum, and adjusted the laser pulse to shorten the “coast time” between laser shutoff and the moment of peak compression to increase the implosion velocity.

To maintain implosion symmetry, they also adjusted the exchange of energy among the laser beams as they crossed in the laser entrance holes. A high-quality target capsule and an ultra-thin, 2-micron fill tube also contributed to the experiment’s success (see “Anatomy of a Milestone Experiment”).

Hurricane said alpha heating requires a plasma areal density, or Rho-r, of more than 0.3 grams per square centimeter and peak central hot-spot density of more than 100 grams per square centimeter. “To get these conditions, we have to delicately balance all these different processes in our plasma,” he said. “Some key physics processes are competing with each other in order to get the pressure and temperature amplification that we need.”

The Aug. 8 experiment fell just short of ignition as defined by the National Academy of Science in 1997—as much or more fusion energy produced as the amount of laser energy (1.92 MJ) delivered to the target. Hurricane noted, however, that the shot produced 70 times more energy than the amount absorbed by the fusion fuel. It also resulted in a thermonuclear instability that caused a rapid, explosive increase in temperature that exceeded the rate of energy loss to the environment, meeting the classic Lawson criterion for fusion ignition.

Hurricane said several repeat experiments have been conducted in an attempt to reproduce the Aug. 8 result. “The best was about 50 percent of the August performance,” he said, “and that implies that we have less-than-ideal engineering control. Imperceptible or nearly imperceptible changes can be the difference between an order-of-magnitude performance or not.

“Really tight engineering control is really needed to make (ICF) work reliably,” he said. “We have efforts going on to increase fusion performance and robustness, but the final takeaway is that the fusion community has an existence proof that fusion ignition in the lab is possible.

“Our ICF effort was not as easy as originally envisioned,” he concluded, “but by solving problems and taking steps in very incremental ways, we’ve attained a significant advancement in fusion research.”