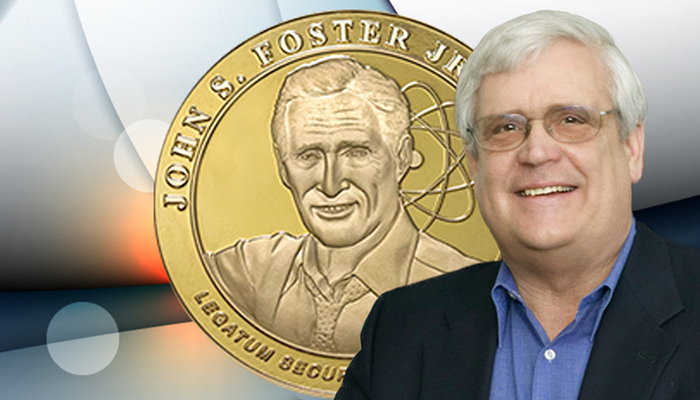 “I am extremely honored to receive the 2021 John S. Foster Award,” Miller said. “Johnny has always been one of my heroes and mentors—that makes getting this award especially meaningful.”

Miller served as associate director for National Ignition Facility Programs, the predecessor of NIF & Photon Science, from 2000 to 2006, when he became LLNL director.

“Working closely with and being mentored by all the previous recipients of the award, I am humbled being included in this group that has given so much to our country,” Miller said. “It is a privilege to have been given the opportunity to work at Lawrence Livermore National Laboratory alongside the thousands of talented and dedicated scientists, engineers, technicians, administrative, financial and procurement specialists. In my judgment, this is a validation of all their efforts in the service of our country.”

Current LLNL Director Kim Budil said: “George truly embodies the qualities that this award recognizes—exceptional leadership in both the scientific and policy realms in support of U.S. nuclear security. He has made many outstanding contributions to the nuclear weapons program, the Department of Defense and Strategic Command in particular, and to a generation of weapon scientists through his mentorship. But George also demonstrated profound vision and commitment to the future of nuclear deterrence by leading the building and commissioning of the National Ignition Facility and advocating for high-energy-density science and fusion ignition as essential capabilities for stockpile stewardship.”

Established by Lawrence Livermore National Security, LLC, (LLNS) and bestowed on an annual basis by the director of LLNL, the medal recognizes exceptional leadership in scientific, technical, and engineering development and policy formulation in support of U.S. nuclear security.

Instituted in 2015, the inaugural recipient was namesake John S. Foster Jr., former director of LLNL. The 2016 honoree was Gen. Larry Welch (retired), former U.S. Air Force chief of staff; the 2017 recipient was Victor Reis, the architect of the Stockpile Stewardship Program; the 2018 honoree was John Nuckolls, director emeritus of LLNL; and the 2019 honoree was Linton Brooks, ambassador for arms control and former administrator of the National Nuclear Security Administration (NNSA). No medal was given in 2020.

Miller served as Laboratory director from 2006 to 2011, first under the management of the University of California. In 2007, he also was named Lawrence Livermore National Security (LLNS) president when NNSA awarded the contract to manage LLNL to LLNS. As the first president and director under the LLNS contract, Miller guided the Laboratory through transition to a new management system, cutting down on operating costs while seeking ways to improve on the Lab's missions of science in the national interest.

Throughout his career, Miller has been recognized as a leader in national security and the stewardship of the U.S. nuclear stockpile. Miller joined the Lab in 1972 as a physicist and in 1980 was promoted to program leader for all thermonuclear design and computational physics development. In 1985, he became an associate director in charge of the nuclear weapons program at the Laboratory.

He left the Lab in 1989 to serve as the special scientific adviser on weapons activities to Secretary of Energy Adm. James Watkins. Miller returned to the Lab in 1990, serving as associate director for Defense and Nuclear Technologies and associate director for National Security. Miller received his B.S. with high honors, his M.S., and his doctorate in physics from the College of William & Mary.

Since stepping down as Laboratory director, Miller has continued to be active in the national security arena principally through his STRATCOM Strategic Advisory Committee membership. He has continued to chair the Science, Technology, and Transformation Panel and is a member of the Nuclear Command, Control, and Communications Panel.

He also participated in a Defense Science Board Study of the National Leadership Command and Control System and a review of the NNSA Stockpile Responsiveness Program by the NNSA’s Defense Programs Advisory Committee. Miller is a member of the College of William & Mary Graduate Studies Advisory Board.

He added: “I have divided the rest of my time between traveling with my wife (Costa Rica, Peru, Chile, Argentina, Iceland, Greenland, Croatia, Nepal, Scotland … and hoping to go to Africa this fall if COVID permits), spending more time with the kids and grandkids, and pursuing my hobbies of photography and genealogy.”

Summing up his thoughts about the Laboratory, Miller said: “Two of my favorite quotes speak about my views of the people of LLNL: One from John Adams speaks of the importance of wise and honest people being public servants. The other, by Teddy Roosevelt in his speech on ‘Citizenship in the Republic,’ speaks of the credit due to all the people who ‘are actually in the arena.’ This honor is theirs and a validation of their efforts.”