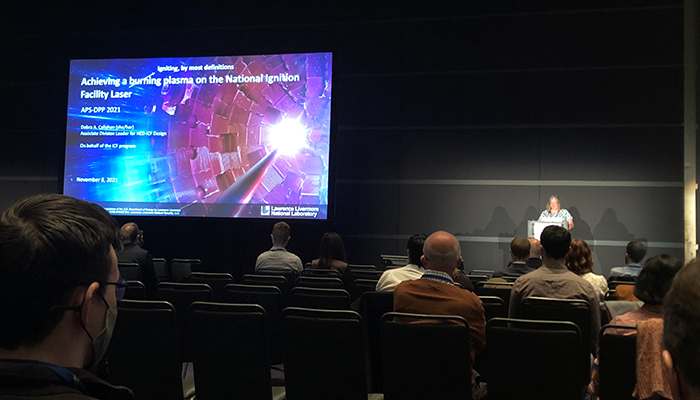 LLNL physicist Debbie Callahan has given plenty of presentations over the years—but she didn’t expect a standing ovation at the 2021 APS Division of Plasma Physics (APS DPP) meeting in Pittsburgh, Pennsylvania.

“I had never had that kind of reaction before to one of my presentations,” said Callahan, who presented “Achieving a Burning Plasma on the National Ignition Facility  Laser” at the start of the annual meeting on Nov. 8. “Throughout the whole week, people came up to me and told me how excited they were.”

The buzz and excitement in the crowd was over the record-setting Aug. 8 experiment that generated more than 1.3 million joules of fusion energy on NIF, the world’s largest and highest-energy laser system. The shot brought researchers to the threshold of ignition as defined by the National Academy of Science and the National Nuclear Security Administration (NNSA), where a NIF implosion produces more fusion energy than the amount of laser energy delivered to the target.

The 1.35-megajoule (MJ) milestone culminated years of research and development in lasers, optics, diagnostics, target fabrication, experimental design and computer modeling and simulation. It was accomplished with contributions from LLNL’s NIF & Photon Science and Weapons and Complex Integration (WCI) teams, as well as throughout LLNL and numerous partners in the global fusion, plasma, and high energy density (HED) science communities.

The hybrid meeting, which ran from Nov. 8 to 12, was attended by a record attendance of about 2,300 registrants, with about 900 people attending in person, according to LLNL physicist Denise Hinkel, chair of the APS DPP. About 150 physicists, engineers, and students from LLNL took part in the meeting.

LLNL physicist Omar Hurricane, who attended the meeting in person, noted that in 2017, both he and Callahan gave talks at the APS DPP meeting in Milwaukee, Wisconsin, on the Hybrid (high yield big radius implosion design) strategy to boost NIF’s fusion performance. Callahan’s presentation focused on the hohlraum strategy for controlling the symmetry of large capsules, while Hurricane’s talk was on the capsule strategy and the theoretical basis for the strategy.

“It was very gratifying," said Hurricane, chief scientist for the Laboratory’s inertial confinement fusion program, “to again give talks four years later that reported on the success of implementing our Hybrid strategy with the burning-plasma implosions fielded over the past year.

“Our talks also told the story of stumbles, recovery, and the time it really takes to build scientific understanding while being under the gun for producing results. The audiences really seemed to appreciate that honesty.”

Hurricane’s presentation focused on the physics of “coast-time,” the time between peak ablation pressure and bang time (the time of peak neutron yield), and its connection to the radius of peak velocity in an implosion. Understanding that, he said, was key to moving the Aug. 8 Hybrid-E implosion into the burning plasma regime and exceeding the Lawson criterion, when the energy from fusion reactions meets or exceeds the loss of energy to the environment, the classic scientific definition of  ignition.

Callahan’s presentation focused on creating a burning plasma and its role in achieving scientific milestones in fusion research. A burning plasma occurs when the energy deposited in the cold fuel surrounding the capsule’s central hot spot by  fusion-produced alpha particles is the dominant source of heating, which is necessary to reach ignition (see “How NIF Targets Work”).

She described several physics milestones on the way to ignition: fuel gain, where the neutron yield exceeds the energy absorbed by the deuterium-tritium fuel; “alpha heating,” where the neutron yield is doubled due to the additional energy deposited in the fuel by alpha-particle heating; and in August, the burning plasma state.

In addition, lead experimentalist Alex Zylstra gave an invited talk on the Hybrid-E burning plasma experiments from the past year, including showing that the Aug. 8 shot passed several scientific criteria for ignition.

And LLNL physicist Joe Ralph gave a presentation on the “hohlraum scans” project, a study launched almost two years ago to learn how to reduce the size of the hohlraum’s laser entrance hole to increase the x-ray drive on the capsule without destroying the ability to control implosion symmetry. Learning from these experiments was key to achieving the results of the record shot, which implemented a reduced laser entrance hole. 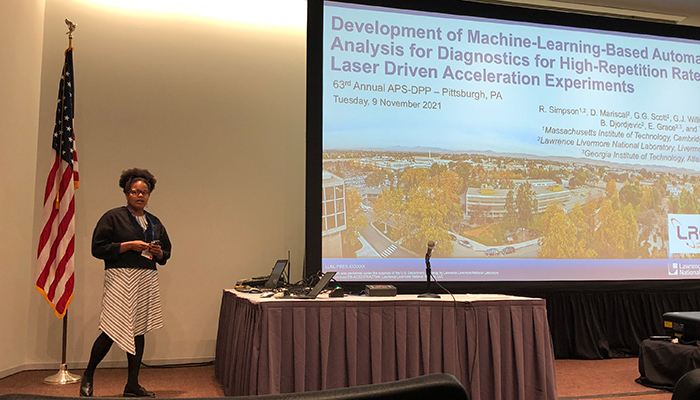 Raspberry Simpson, a MIT graduate student who is doing her Ph.D. while at LLNL, gave a presentation on “Development of Machine-Learning-Based Automated Analysis for Diagnostics for High-Repetition Rate Laser Driven Acceleration Experiments” at the APS DPP annual meeting. Credit: Tammy Ma

She praised the hybrid-style meeting, saying that the remote talks had relatively few technical glitches. Like Callahan and the others, Swanson was pleased to be able to meet and visit with scientific colleagues in person again.

“After so many Zoom conferences, it was a pleasure to meet up with people and talk about their research,” Swanson said. “They had a mini conference on machine learning, and I was interested to see all the different ways people were applying these techniques to HED science. And there certainly was a lot of excitement over the presentation of the NIF results.”

Hinkel noted that this was the first hybrid meeting for DPP and for APS—because of the pandemic, the 2020 meeting in Memphis, Tennessee, was totally virtual.

“The in-person attendees seemed very pleased with the venue and the program,” Hinkel said. “Those participants that attended remotely enjoyed the plenary and invited talks.”

Meanwhile, Callahan smiled when describing the excitement over the 1.3-MJ fusion milestone. “Professors have been telling me that they’re getting more interest from students now because of these results,” she said. “People saw the press releases before the talk, and it’s generating a huge amount of excitement in our field, which is just great.”