LLNL researchers and their colleagues are developing a new technique for creating powerful magnetic fields inside NIF hohlraums. Simulations and experiments have shown that magnetized hohlraums could significantly enhance NIF’s implosion performance.

The first experiments aimed at testing the technique, which uses lasers to generate the magnetic field, were conducted in February during a week devoted to Discovery Science experiments on NIF. 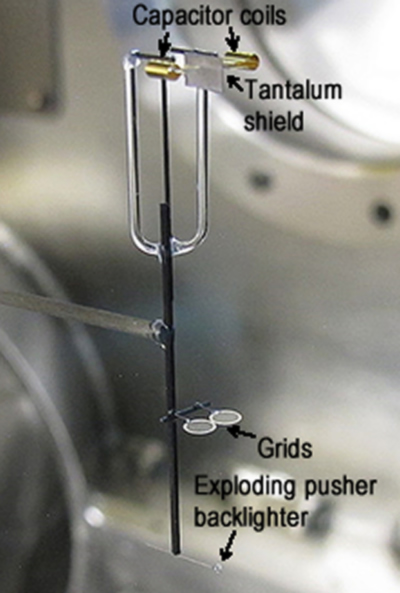 Laser magnetic-field target showing the two laser-driven coils separated by a tantalum shield, the proton backlighter “exploding pusher” sphere, and the two grids, or screens, that imprint a spatial pattern so that researchers can quantify the deflection, or spreading, of the protons. This experiment marks the first time NIF has completed two target experiments in a single shot. Calculations show that magnetic fields can help enhance the fusion burn rate in inertial confinement fusion (ICF) ignition targets in two ways: by reducing heat conduction away from the compressed high-temperature plasma fuel in the central “hot spot” of the target capsule; and by adding confinement to the charged particles, known as alpha particles, produced by the fusion reactions. Keeping the particles closer to the hot spot would help increase the energy deposited in the cold outer layers of fuel surrounding the hot spot—a process known as alpha heating—and thus increase the odds of generating a self-sustaining fusion reaction (see “How NIF Targets Work”).

“We’ve been working for several years at the OMEGA EP laser (at the University of Rochester) to develop a laser-driven magnetic field platform,” said the campaign’s principal investigator, LLNL physicist Brad Pollock. While previous experiments generated the magnetic field in thin wires, he said, “we’d like to magnetize something as large as a hohlraum. That’s where we’re eventually driving.” 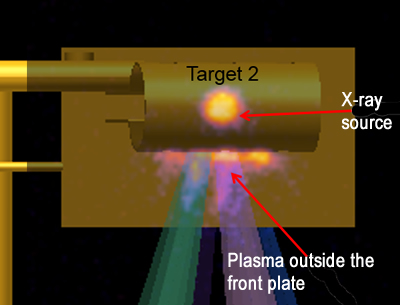 Gated x-ray detector image shows some of the plasma generated when the laser beams struck the target.

In last month’s experiments, about 80 trillion watts of peak power from the NIF lasers irradiated twin capacitor coils about one-third the size of typical NIF hohlraums. Hot electrons ejected from the resulting plasma generated several million amps of solenoid current as they looped around the surface of the coils, producing large magnetic fields. The magnetic fields deflected the protons from an exploding pusher backlighter.

“If you took a hohlraum and slotted the wall, put two fins off to the side, and did the surface plasma hot electron ejection,” Pollock said, “you can use the hohlraum wall to produce a magnetic field that would be relevant either for hohlraum physics, at 10 to 20 tesla, or capsule physics at 50 tesla.” Fifty tesla is comparable to the field strength of some of the world’s most powerful magnets. 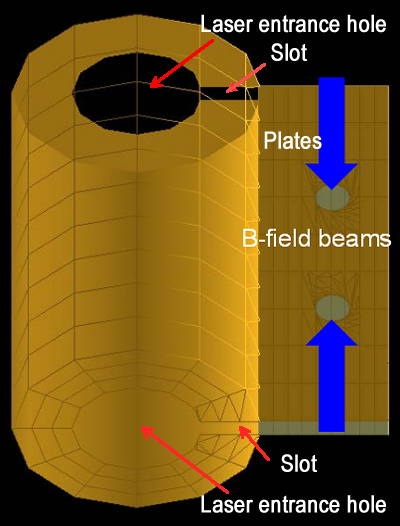 Diagram of a NIF hohlraum “loop” target modified for magnetic-field (B-field) experiments. One to three NIF beams will be directed to the plates, or fins, on the side of the hohlraum to generate the magnetic fields.

Pollock noted that axial hohlraum magnetic fields in the 10- to 20-tesla range have been suggested as a way to help drive implosions more symmetrically. At 50 tesla, he said, the capsule effects of reduced heat conduction and alpha particle confinement would kick in.

The February experiments were the first to shoot two targets in a single NIF shot. Because the complicated targets posed fabrication challenges, the experimenters decided the two-target scheme was the best way to get the data they needed within the shot time allocated for the experiment. “We wanted to get as much data as we could,” Pollock said, “and the geometry worked out to be able to do this experiment in this way.” Good data were acquired by all the diagnostics used in the experiment.

The next experiments in the campaign, scheduled for fall of this year, will compare the results of shots with and without the magnetic fields to measure the effects of the magnetized hohlraums.

Along with the promise of improving NIF ICF implosions, magnetized targets also are generating interest for high energy density and astrophysics experiments. Several current NIF Discovery Science campaigns are studying astrophysical magnetic fields to determine their origins, how they evolve, and their role in other cosmic phenomena.

In all, 14 experiments were successfully conducted during the week of Discovery Science experiments, which ran from Feb. 12 to 17. In addition to the magnetic-field campaign, the shots supported campaigns studying stellar and Big-Bang nucleosynthesis, asymptotic self-similar instabilities, pressure ionization at extreme densities, and turbulent dynamo magnetic-field amplification.

Along with Pollock, the laser-driven magnetic-field experimental team is composed of John Moody, Clement Goyon, Steve Ross, George Swadling, Jackson Williams, Derek Mariscal, David Strozzi, Dan Kalantar, Will Farmer, Rich Zacharias and Bruce Remington from LLNL; Dan Haberberger and Dustin Froula from the Laboratory for Laser Energetics at the University of Rochester; Shinsuke Fujioka and King Law from the Institute of Laser Engineering at Osaka University; Eleanor Tubman and Nigel Woolsey from the University of York; and Joao Santos and Mathieu Bailly-Grandvaux from the Center for Intense Lasers and Applications at Bordeaux University. Members of the team that fabricated the complex targets were Kelly Youngblood, William Hoke, Mike Mauldin, and Jon Nafziger of General Atomics and Russell Wallace and Scott VonHof of LLNL.

Ten new Discovery Science experiments have been awarded NIF shot time beginning in the spring of 2018. The experiments, selected from among 26 proposals submitted last summer, range from astrophysics and plasma physics to nuclear physics, material properties, and hydrodynamics. 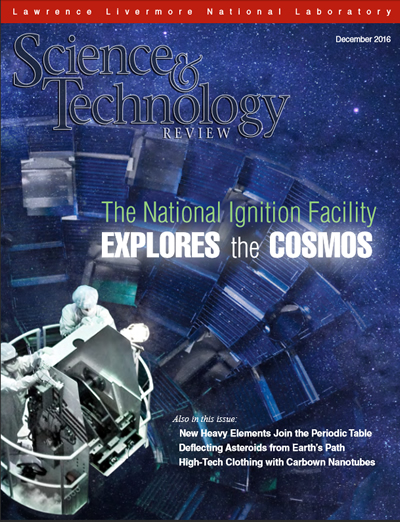 NIF received 34 initial expressions of interest from national and international scientists from the academic, national laboratory, and private sectors. The 26 full proposals were reviewed by a technical review committee (TRC) which met at the Laboratory from Nov. 7 to 9. The TRC advised NIF on the relative scientific merit of the proposals.

The average number of shot days awarded was 1.8; time awarded ranged from 1 to 3 days.

The selected proposals and their principal investigators are: 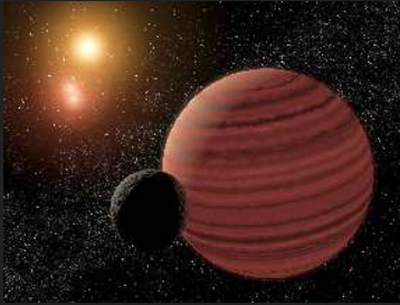 Artist's rendition of a brown dwarf. Brown dwarfs are larger than planets and smaller and cooler than stars; their presence could account for some of the invisible “dark matter” in the universe. Credit: Robert Hurt, Caltech