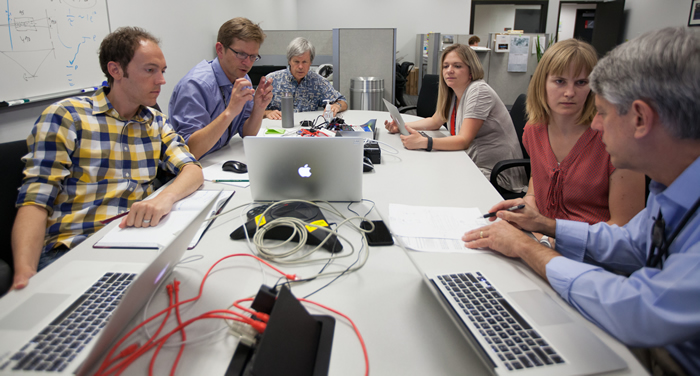 Devoting a full week of shot time to fundamental science experiments is an important aspect of NIF’s academic outreach program, said NIF Discovery Science Program Leader Bruce Remington. “We want to open up our facility at about the eight percent (of shot time) level to anyone in the world who has a great idea that would benefit from unique experiments on a very high-energy laser system. There are things you can do on NIF, a roughly two-megajoule laser facility, that you can’t do anywhere else.”

In many cases, he said, the research teams have “tried out and developed their techniques on other laser facilities, so they know what to do. All the other lasers in the world are very good at developing the techniques, but often the full energy that’s required to reach the conditions the researchers require is just not quite there. 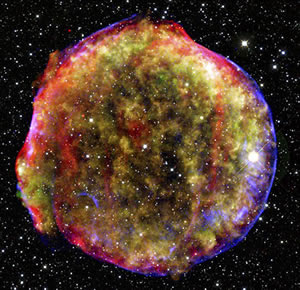 Chandra X-ray Observatory photo of the Tycho supernova remnant discovered by astronomer Tycho Brahe in 1572. The supersonic expansion of the exploded star produced a shock wave moving outward into the surrounding interstellar gas. A reverse shock wave racing back into the expanding stellar debris at Mach 1000 (1,000 times the speed of sound) is heating the debris to millions of degrees (red and green) and causing it to emit x-ray light. The thin shock layer on the edge is believed to be from collisionless shocks. Credit: NASA/CXC/SAO To study the properties of matter at the center of large planets like Jupiter, or the extra-solar “super-Earths,” or energetic astrophysical events such as accreting black holes or exploding stars (supernovae), they need factors of 50 to 100 more energy and power (available on NIF) to get that done.”

Discovery Science teams typically are allocated two to three laser shots in a 24-hour period for their experiments. “They have full use of the laser beams,” Remington said. “The whole facility is theirs, so they can, within the safety limits of the laser, fire any kind of laser energy and pulse shape and power they would like. They can turn on any diagnostics they would like, as long as there’s time to align them, time them, and turn them on.”

Here are summaries of the five campaigns conducted earlier this month:

“This experiment was trying to see the magnetic nature of collisionless shock formation and evolution that is relevant to cosmic ray particle acceleration,” said NIF & Photon Science physicist Hye-Sook Park, the ACSEL team’s LLNL liaison. “This was diagnosed by the protons generated by an imploding deuterium-helium-3 capsule. Initial data indicate that we achieved at least five times higher proton flux from the D3He capsule compared to our last shot day (March 29), promising high-quality proton images.” Image processing is under way at the Massachusetts Institute of Technology (MIT). 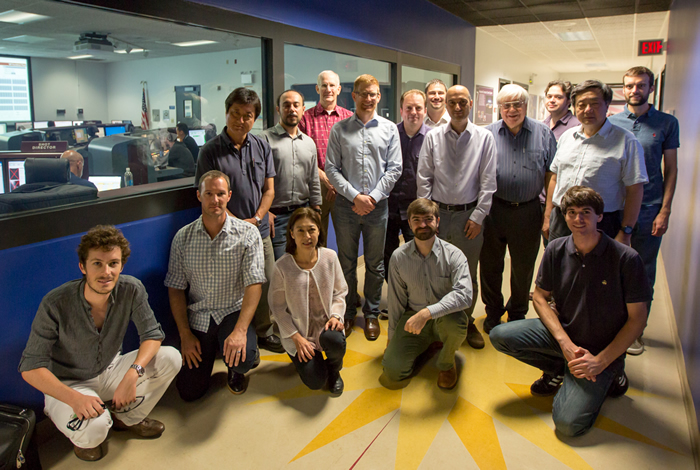 These were the first NIF shots in which Hans Rinderknecht, a Lawrence Fellow at LLNL, served as shot RI (responsible individual); Rinderknecht was a collaborator for the ACSEL project as an MIT graduate student and a participant in the NIF-MIT PhD Thesis Program. “The shot day was joined by about 20 collaborators from around the world,” Park said. “It is exciting to see that so many young researchers are so keen on the NIF Discovery Science program and their excitement over the scientific results and implications from the NIF data.” 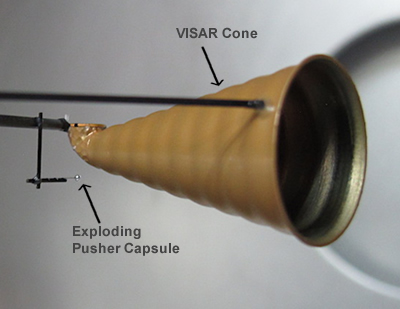 Side view of the “stopping power” target showing the tiny deuterium-helium-3 exploding pusher capsule on the left and the VISAR cone on the right. and also is relevant to nuclear plasma-astrophysics processes. The upper NIF beams shocked a slab of glassy high-density carbon while the lower beams drove an “exploding pusher” target filled with deuterium and helium-3 as a proton source.

A new target design was successfully implemented that enables simultaneous shock characterization and proton probing by the velocity interferometer system for any reflector (VISAR) diagnostic. Previously, acquiring this data required two shots. Good data were acquired on the VISAR and secondary diagnostics; the proton data will require a few weeks for processing.

Participating on-site for the shots were Alex Zylstra of LANL, Ryan Rygg of LLNL, and Chikang Li of MIT, along with additional researchers at MIT supporting the diagnostics, and theory collaborators at LLNL, UC Irvine, and Sandia National Laboratories (SNL). 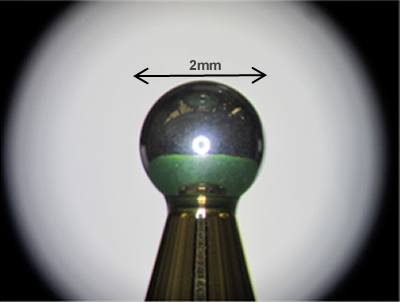 Participating in the shots were Benjamin Bachmann, Tilo Döppner, Annie Kritcher, Joe Nilsen, and Nino Landen of LLNL; Siegfried Glenzer of the SLAC National Accelerator Laboratory; Michael MacDonald of SLAC and the University of Michigan; Alison Saunders and Roger Falcone of UC Berkeley; Dominik Kraus of the Helmholtz-Zentrum Dresden-Rossendorf Laboratory in Dresden, Germany; and Paul Neumayer of the GSI Helmholtz Center for Heavy Ion Research in Darmstadt, Germany.

Planar direct-drive platform development: Long-Duration Direct-Drive Planar Hydrodynamics experiments are aimed at measuring the laser imprint and direct-drive uniformity on a planar target in order to qualify a NIF long-duration direct-drive platform. The experiments diagnosed for the first time the growth of 3D ablative Raleigh-Taylor hydrodynamic instability (RTI) seeded by intentional large imprint features, or “ripples,” on the target capsule. The growth was tracked from 12 to 24 nanoseconds over two experiments.

Raleigh-Taylor instability occurs when a dense fluid is accelerated by a less dense fluid, resulting in fingers of dense material (spikes) interpenetrating the less dense fluid which rises as “bubbles,” leading to mixing of the two fluids. Preliminary analysis indicates that up to four generations of bubbles were created as larger bubbles overtake and merge with smaller bubbles as a result of the long-duration drive, which is available only on NIF. The shots successfully concluded the direct-drive platform development effort and will help understanding of the highly nonlinear behavior of the RTI at the ablation front in direct drive.

Participating team members were Alexis Casner of the French Alternative Energies and Atomic Energy Commission (CEA), Vladimir Smalyuk, David Martinez, and Shahab Khan of LLNL, Laurent Masse of CEA and LLNL, and Corentin Mailliet, a PhD student at the CELIA Laboratory of Bordeaux University in France. Also participating in the campaign are the Nuclear Research Center Negev in Israel, the Laboratory for Laser Energetics (LLE) at the University of Rochester, Princeton Plasma Physics Laboratory, and the University of Michigan.

Preliminary data from the polar gated x-ray detector (GXD) showing the growth of “bubbles” over time (indicated by the yellow arrows) caused by Raleigh-Taylor instabilities in the Long-Duration Direct-Drive Planar Hydrodynamics experiments on March 30 (center) and August 2.

Turbulent dynamo generation: The Turbulent Dynamo (TDyno) Discovery Science project studies how small seed magnetic fields are amplified under turbulent plasma conditions, a process that happens throughout the universe. Cosmological magnetic fields could have played an important role in the formation of the first stars and could seed the stronger fields seen in galaxies and clusters of galaxies today. NIF is the only laboratory facility that can create the proper plasma conditions to generate fully formed astrophysical collisionless shocks and strong magnetic field amplification by a turbulent dynamo process. More information and the results of the TDyno experiments will appear in the next issue of NIF & Photon Science News.