The LANL-led experiment used a target capsule lined with a DT-saturated polymer foam developed over the last decade by members of LLNL’s Material Sciences Division and target specialists at General Atomics (see “Solving the Challenges of Making Liquid-Hydrogen Targets”). The foam-layered fuel capsules open a new NIF experimental platform, providing an opportunity to explore the relationship between hot-spot convergence ratio (the initial fuel radius divided by the imploded radius) and the robustness of hot-spot formation during inertial confinement fusion (ICF) implosions.

The new platform also enables designs which should allow dopants (small, controlled amounts of impurities) to be in direct contact with the fuel. Researchers said doping the foam could be used to diagnose the plasma conditions, such as electron temperature, at the edge of the target’s central hot spot; the density of the cold fuel surrounding the hot spot; and the mix of cold fuel into the hot spot.

X-ray self-emission images of the wetted-foam target captured by time-gated x-ray detectors at the Target Chamber equator (left) and at the pole.

The primary goal of the experiment was “to demonstrate our ability to field DT layers at low convergence ratios,” said LANL scientist Rick Olson, one of the wetted-foam campaign’s responsible individuals. “The baseline DT-ice-layer ICF ignition design requires a very high- convergence implosion (a convergence ratio of about 35) with a hot spot that is dynamically formed from a thin, inner portion of the DT ice layer,” he said. “Several years ago, (LANL colleague) Ray Leeper and I began thinking about a more robust hot-spot formation process that could have a reduced convergence implosion, with a hot spot formed mostly or entirely from mass originating within a spherical volume of DT vapor.

“It soon became clear to us that the path to such a design would involve replacing the DT ice layer with a DT liquid layer,” Olson said. “After several years of effort, we had an opportunity to test the liquid DT layer concept in this collaborative LANL/LLNL experiment at the NIF.”

The wetted-foam target design allows for flexibility in the hot-spot convergence ratio through adjustment of the initial cryogenic capsule’s temperature and, thus, DT vapor density. Olson said higher initial vapor density both reduces the capsule convergence, leading to more symmetric implosions, and changes both the process of hot-spot formation and the burn history of the hot spot. Both changes are expected to ameliorate challenges to high-convergence, DT-ice-layer implosions, such as the growth of hydrodynamic instabilities, while preserving the physics of layered implosions. Olson said the lower-convergence implosion also could be less sensitive to the x-ray flux asymmetries that occur in the NIF hohlraum and could help increase the NIF shot rate for layered ICF capsules. 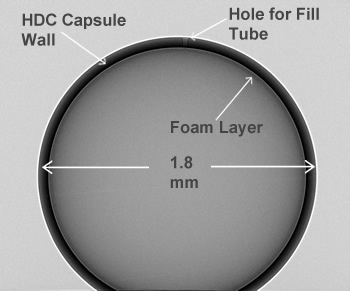 X-ray image of a high-density carbon (HDC), or diamond, capsule with a wetted-foam layer. The subscale target used in the April experiment had a diameter of 1.688 millimeters. Credit: Neal Rice, General Atomics

The experiment used a liquid DT fuel layer at a temperature of 26 kelvin (-412 degrees Fahrenheit). NIF delivered an 876-kilojoule pulse of ultraviolet light with a peak power of 297 terawatts. Preliminary results show the implosion had a convergence ratio of about 14 and was quite round, with a slightly “sausaged” shape in the equatorial view and with little time-dependent change in shape, as expected for a low-convergence implosion. Neutron yield was about 4.5 × 1014 (450 trillion), close to the yield predicted by one-dimensional simulations.

Development of the wetted-foam capsule began as a Laboratory Directed Research and Development strategic initiative in 2007 with the goal of enabling researchers to “dial in” a desired concentration of dopants in the foam so they would come into direct contact with the fuel and provide diagnostic information about the implosion. The project evolved into a design for mass-produced targets for inertial fusion energy, then was taken up by the LANL researchers to investigate the relationship between convergence ratio and hot-spot robustness.

NIF completed two DT layered implosions in one week for the first time with the liquid layer experiment. It took less than six hours to form the liquid layer once the target was cold, demonstrating the potential for fast turnaround times for wetted foam capsules.

Olson said the next wetted-foam experiment will change the target fielding temperature to increase the convergence by lowering the liquid DT vapor pressure, thereby demonstrating control of the convergence. The platform’s longer-term goals are to provide insights into hot-spot formation through control of the experiment’s initial conditions.

The Earth is under constant bombardment by subatomic particles called cosmic rays, including some, known as ultra-high-energy cosmic rays, that pack much more punch than the world’s most powerful particle accelerators. Fortunately, Earth’s atmosphere protects us by dissipating most of that energy before it reaches the ground. 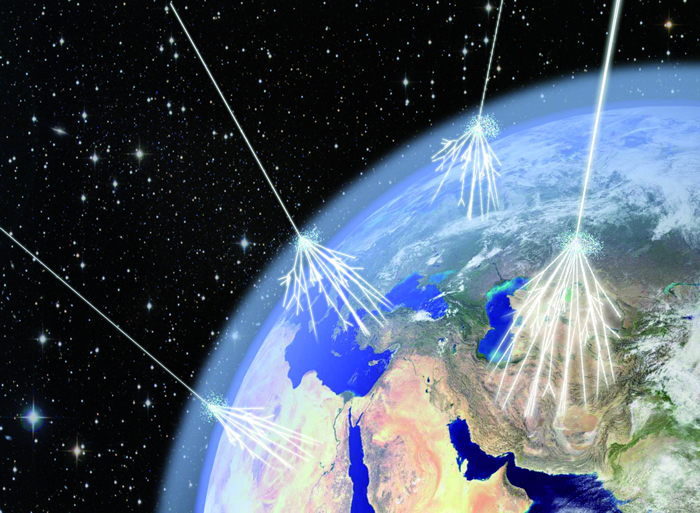 An illustration of “air showers” that result when ultra-high-energy cosmic rays strike the top of the Earth’s atmosphere and collide with air nuclei, producing other particles that lose most of their energy before reaching the ground. Most cosmic rays are protons or helium nuclei from the sun, but the origins of the highest-energy cosmic rays, which tend to be nuclei from heavier elements such as carbon and iron, are uncertain. Many scientists believe they are produced during supernova explosions, but recent studies indicate that they might be sent on their way by activity near the black holes at the center of the Milky Way and other galaxies. Credit: Asimmetrie/INFN, via CERN

But where do these ultrafast cosmic rays come from, and how are they accelerated to such high energies—one quadrillion (1015) electron volts and more? Scientists have been searching the heavens for answers to those questions for many decades, yet much about the origin and nature of ultra-high-energy cosmic rays remains a mystery.

Now an international team of researchers is trying a different approach. Instead of looking deep into the universe with telescopes, or trying to capture the debris from atmospheric cosmic-ray collisions with particle detectors, they’re trying to duplicate the actual conditions that could contribute to cosmic-ray acceleration right here on Earth, in the NIF Target Chamber.

In a NIF Discovery Science campaign conducted by the Astrophysical Collisionless Shock Experiments with Lasers (ACSEL) collaboration, the researchers are carrying out a series of experiments aimed at understanding the possible role of collisionless shocks and related intergalactic magnetic fields in cosmic-ray acceleration. 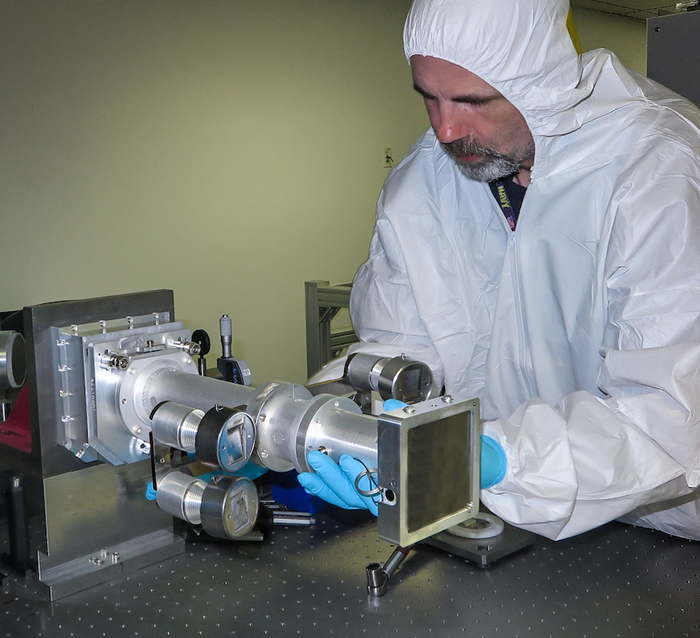 Target Diagnostics Facility technician Glen Grant mounts a large-aperture proton radiography imaging diagnostic on the snout of a diagnostic instrument manipulator for a March 29 Discovery Science collisionless shock experiment. The experiment generated magnetic fields through the formation of plasma instabilities (known as filamentary Weibel instabilities) which trap ions in the plasma and form shocks. This type of collisionless shock may be contributing to cosmic ray acceleration.

In collisionless shocks, the charged particles in a plasma (a medium consisting of freely moving ions and free electrons) pass by largely without colliding with each other; such shocks occur in many astrophysical phenomena including supernova remnants, gamma-ray bursts, and jets from active galactic nuclei. NIF is the only facility capable of creating plasmas with sufficiently high density (greater than 1020 particles per cubic centimeter), high flow velocity (greater than 1,000 kilometers per second), and high temperature (greater than 1,000 electron volts) to conduct these experiments. In the scaled NIF experiments, the collisional mean free path—the average distance traveled by a particle between collisions with other particles—is much larger than the experimental volume, yet the collisionless shocks created are similar to the astrophysical conditions observed in space.

The two most recent ACSEL experiments, conducted on NIF on March 29, studied high-speed collisionless shock formation by firing more than 125 NIF beams at targets composed of two plastic foils facing each other. The associated magnetic field was backlighted, or probed, by protons from a tiny laser-irradiated sphere known as an “exploding pusher” target filled with a mixture of deuterium and helium-3 (D3He).

(Left) The collisionless shock target consists of two opposed plastic foils separated by 10 millimeters, each heated by 250 kilojoules of laser energy. The foils create plasmas that accelerate and collide, while a D3He-filled exploding pusher (at the end of the L-shaped arm below the target) creates a proton source to probe the self-generated magnetic fields in the interaction region. The magnetization effects on the counterpropagating plasmas were imaged with proton pulses delayed by 3.5 and seven nanoseconds after the main laser pulse and detected by the large-aperture proton imager. (Right) An image of the targets captured by the upper static x-ray imager (SXI) showing the emissions from the two heated plastic foils and the exploding pusher proton backlighter.

This series of experiments was the first to use the D3He-filled exploding pusher, which was developed in collaboration with the Massachusetts Institute of Technology (MIT) Plasma Science and Fusion Center, as the proton backlighter for a physics experiment on NIF. The signature of the Weibel instabilities would be filamentary structures caused by the magnetic nature of flow interactions and shock formation; processing of the data gathered by the proton radiography imager is now under way.