NIF’s ability to conduct groundbreaking Discovery Science (DS) experiments—studies of how the universe works at a fundamental level—has been significantly enhanced by the recent efficiency improvements that now make it possible for NIF to fire an average of a target shot a day.

In one week in September LLNL researchers, in collaboration with several international academic and research institutions, conducted eight highly successful shots in support of four DS experimental campaigns, bringing the total number of DS shots for Fiscal Year 2015 to 44 in eight different experimental campaigns. In all, NIF conducted 356 target shots during the fiscal year, exceeding the goal of 300 shots for FY2015 established by the recent “120-Day Study” of ways to increase the shot rate. This represented an 86 percent increase in target shots over FY2014.

The Discovery Science program on NIF began in 2010 to provide academic users with access to the unique density, temperature, and velocity regimes that NIF can create, and to enhance collaboration between academia and LLNL scientists. The September experiments completed NIF’s first competitively-awarded academic-use campaigns. Nine new DS projects will be initiated in FY2016, and NIF has received 22 proposals for FY2017 DS experiments. 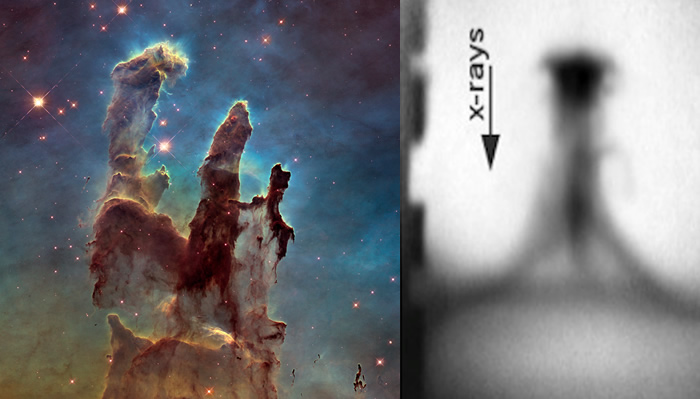 On Sept. 17 a team of LLNL physicists led by David Martinez and Jave Kane, in collaboration with the French Alternative Energies and Atomic Energy Commission (CEA) and the University of Maryland, succeeded for the first time in creating “pillar” structures in the laboratory. The structures are relevant to the Eagle Nebula’s Pillars of Creation observed by the Hubble Telescope (left). Two Eagle shots produced very long duration (45- and 60-nanosecond) x-ray drives to induce molecular pillar formation in a foam target (right). Excellent data were obtained on both shots. Pillars credit: NASA/ESA/Hubble Heritage Team (STScI/AURA)/J. Hester, P. Scowen (Arizona State U.)

The campaigns completed in September were: 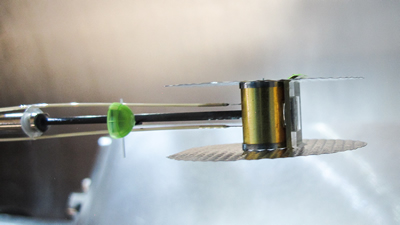 A target consisting of a step target of iron glued onto a step target of copper used in a NIF Discovery Science experiment to measure the equation of state of iron under ramp, or gradual, compression to a peak pressure of 14 Mbar (14 million times Earth’s atmospheric pressure). The equation of state characterizes the state of matter of a material under a given set of physical conditions.

“Being able to probe these extreme conditions experimentally on NIF will have very high impact on our understanding of the planets and stars, including providing insights into which exoplanets might be capable of sustaining life and into the dynamics of how stars are formed,” said Bruce Remington, program leader for NIF Discovery Science.

In a recent Physics of Plasmas paper, Remington and two colleagues—Robert Rudd of LLNL and Justin Wark of the University of Oxford in the UK—presented a comprehensive review of the kinds of fundamental science experiments that have been enabled by NIF, the OMEGA Laser System at the University of Rochester, and other high-power lasers, pulsed power facilities, and next-generation light sources.

“Regimes of science hitherto thought out of reach in terrestrial settings are now being accessed routinely,” the researchers said. “There are a multitude of new regimes of science that are now accessible in laboratory settings. Matter can now be studied experimentally with precision at very high pressures and over very short time scales.

“With these modern experimental and theoretical capabilities,” they said, “the pace of new discoveries in the properties, phases, and states of matter is accelerating, which highlights one of the most exciting eras in science. Coupled with the studies of planetary formation, the formation of planetary systems, and investigations of the likely environments in, on, and around the exoplanets, these new experimental and theoretical capabilities are tied to far-reaching explorations about the universe.

“This is an exciting field,” they said, “and an exceptionally exhilarating time to be involved in this area of research.”

A NIF experimental campaign may have unlocked scientific secrets behind how hydrogen becomes metallic at high pressure.

“Hydrogen properties are still puzzling,” said LLNL physicist Marius Millot. “In particular, back in 1935 it was predicted that hydrogen should become metallic at sufficiently high pressure, but our colleagues using static compression have yet to find clear evidence for metallization at room temperature.”

In previous studies spanning a decade at the OMEGA Laser Facility at the University of Rochester, the team probed shock-compressed hydrogen properties at temperatures ranging from 3,000 to 50,000 Kelvin to reveal the role of temperature in hydrogen molecule dissociation and the progressive metallization in the warm dense fluid. 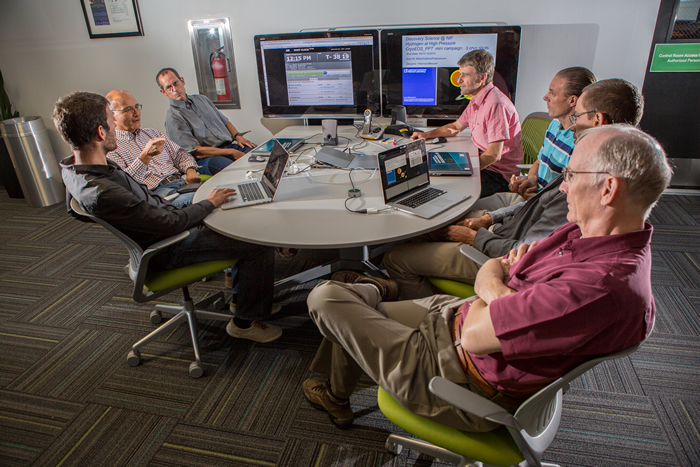 In addition, they learned that most advanced numerical methods fail to accurately compute the properties of warm dense hydrogen at those conditions. In particular, the many different numerical methods disagree regarding the existence of a sharp phase transition between the molecular insulating fluid and a metallic atomic fluid near one to three megabar (one to three million atmospheres of pressure) and 1,000 to 2,500 K.

In a four-shot mini-campaign—one shot in July and three in mid-September—researchers from LLNL, the University of California, Berkeley, Carnegie Institution for Science, the French Alternative Energies and Atomic Energy Commission and the University of Edinburgh explored another approach to search for this predicted phase transition, called the plasma phase transition. They used NIF to launch a series of small laser-driven shocks of increasing strength to explore hydrogen’s high density fluid regime, reaching pressures of about three Mbar, and were able to document changes in the hydrogen optical properties.

“It is amazing that NIF can explore compression paths leading towards ignition and the fundamental properties associated with both the molecular-to-atomic and insulator-to-metal transitions in hydrogen,” said LLNL physicist Rip Collins.

The hydrogen campaign should help benchmark the numerical methods. As the researchers examine the data from the campaign, they hope to determine the pressure and temperature at which this transition occurs. In addition, the team will compare their new data with the numerical calculations, results from static compression, and recent results obtained on the Z Machine at Sandia National Laboratories in a similar configuration.

“As we explore a totally new region of the pressure-temperature phase diagram, our data could have an important impact for basic condensed matter theory and numerical methods,” Millot said. “In addition, our work has implications for gaining a better understanding on gas giant planets and exoplanets.” 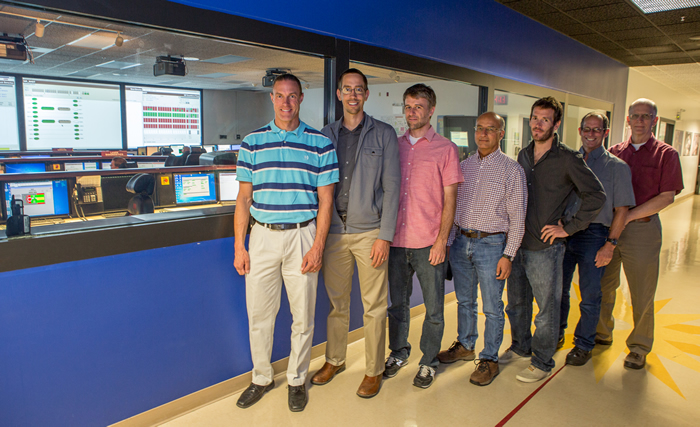 According to Millot, Jupiter, Saturn and their extrasolar “cousins” are mostly made of hydrogen and helium. Despite this apparent simplicity in contrast to the highly complex mineralogy inside rocky planets, however, the internal structure of Jupiter and Saturn remain mysterious. In particular, scientists have postulated that hydrogen and helium, which are dense fluids inside these planets, could separate much like oil and water when hydrogen becomes metallic. If this does occur, it could strongly modify their internal structure and how they evolved over the past 4.5 billion years.

“Learning the details of the metallization and which numerical method captures the real behavior of hydrogen near the transition could help us understand the hydrogen-helium demixing question,” Millot said.

In addition to the researchers, the campaign was supported by a large team including target fabrication and NIF engineers, technicians and staff.