For many NIF experiments, data from different stages of the experiment as it evolves in time can provide insights into such areas of interest as the ability of materials to resist growing hydrodynamic instabilities and the properties of low-density plasmas as they expand away from the target.

To increase the facility’s usefulness to experimenters, in 2013 the NIF Team developed a unique long-delay backlighter (LDBL) capability that made it possible to propagate backlighter beams at delays of up to one microsecond after the initial laser pulse (backlighters irradiated by several of the NIF beams provide the illuminating radiation that enables diagnostic equipment to record experimental results). The long-delay capability has been used in more than a dozen NIF material strength and other high energy density experiments in the last two years (see “Experiments Test High-Pressure Material Response”).

But setting up an experiment for an LDBL shot, and then restoring the system to normal operations, was time-consuming and labor-intensive. “The overhead was quite extensive,” said Dave Mathisen, Integrated Computer Control System shot timing system engineer. “There was always at least a four-hour delay in just setting up for one of these shots.” 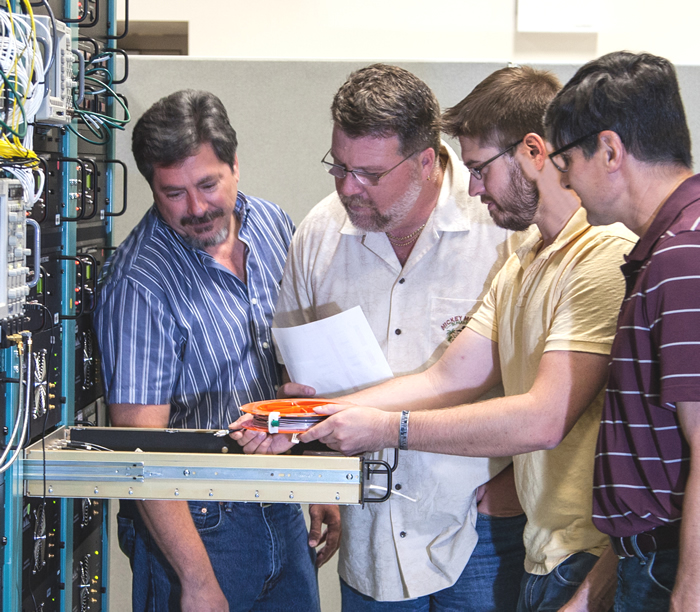 The shots required the installation of additional lengths of fiber in the Master Oscillator Room (MOR), where each NIF shot originates, to shift the timing of the laser “window” on the backlighter beams (see “Injection Laser System”). Then a software script was run to redefine timing points throughout the beamline for the value of the additional fiber, while saving the initial values. “It would basically be tricking the shot automation system downstream to not really know whether or not we had a (new) fiber installed at all,” Mathisen said.

“Then there was a manual inspection of hundreds of lines of data,” added Gordon Brunton of NIF Computing Applications. “Changes that were being proposed needed to be reviewed by subject-matter experts to make sure that what we were intending to do was going to achieve the desired results.” After the shot, the extra fiber was uninstalled, the set points were restored to their original values, and the normal timing was verified. The total process required about four hours before the shot and another four hours afterward, or about one complete shot cycle.

This year, as part of NIF’s continuing efforts to increase its shot rate in part through efficiency improvements, a multi-program team set out to streamline and automate the LDBL process. “We took a long view of it,” Mathisen said. “We met with customers, we met with the User Office, we met with everybody who had a stake in it.” Shot RIs (responsible individuals), fiber fabricators, experimentalists, diagnostics analysists, and shot automation and logistics experts were consulted to develop a new process, called the fiber delay backlighter (FDBL) system.

“It was an automation of the process on the front end,” Mathisen said. When users decide to employ the long-delay process, the system provides feedback about the availability of the required fibers and the cost of ordering new fibers, if needed. If the user approves, the fibers, which are fabricated in-house, are prepared and the experiment is run.

The system also provides set procedures and guidance that allows the fibers to be installed in the MOR by trained technicians, eliminating the need for timing experts to handle the setup. Data system tools validate that the timing system is capable of supporting the requested delays. “That was all manually done previously by manual timing qualification,” said Brunton. With the FDBL process, setup and teardown time has gone from four hours before and after the shot to 40 to 50 minutes per shot, depending on the number of quads employing the delays.

Another FDBL feature is the ability to change the delay time in different quads, so data from multiple backlighters can be obtained. “The shot users are all very excited about using the system because it’s much easier for them to visualize,” Mathisen said. “They get instant feedback when they’re planning. All kinds of optimizations fall out of this because of the ability to see what we’re doing.”

The FDBL system was used in four recent Discovery Science experiments designed to study the star-formation process in molecular hydrogen clouds, such as the famous “Pillars of Creation” in the Eagle Nebula (see “Unlocking the Secrets of Star Creation”). 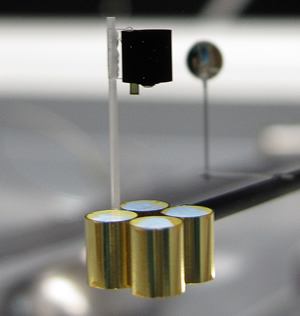 The four-hohlraum target used in the September Eagle experiment. Researchers were able to use FDBL to drive four hohlraums one after another, from times of 0 to 15 nanoseconds, 15 to 30 ns, 30 to 45 ns, and 45 to 60 ns, for a total x-ray drive length of 60 ns. The multi-hohlraum array simulates a bright, sustained stellar source, and the NIF Eagle science package mocks up a radiatively-driven, star-forming cloud of molecular hydrogen. The same fiber was used in back-to-back experiments, saving additional time.

“The fiber-delay system permits the Eagle multi-hohlraum x-ray source to drive a science package for 60 nanoseconds, instead of the 30 nanoseconds that was possible on the first NIF Eagle shots” in April, said co-principal investigator Jave Kane. “This permits the science package to evolve hydrodynamically into a mature column structure with density and velocity similar to what astronomers observe in the Pillars of the Eagle Nebula.”

“Now that we’re allocating shots based on time, (the FDBL process) empowers the users,” Brunton said. “If they can avoid a fiber swap, they can avoid the time penalty cost in doing that by switching the order of the shots in the experiment. And this is even more important going forward into (Fiscal Year 2016). The shot rate (goal) goes up to 400 a year now (from 300 in FY 2015), so anything we can do to try to minimize the impact of setting up for these more complex experiments can pay dividends.”

The team that keeps the power flowing to NIF’s lasers is taking steps to insure that the facility will have the energy it needs for target shots well into the future.

To keep firing its lasers at a rate of more than a shot per day, NIF must have a robust and reliable power conditioning system, or PCS. The PCS provides nearly 400 million joules (MJ) of electrical energy to energize the giant flashlamps that power the large glass amplifiers that boost NIF’s laser beams to a total infrared energy of more than four MJ.

The NIF PCS is the world’s most energetic capacitor bank. Each of its 192 modules stores two MJ of energy over a period of about 60 seconds in banks of high-voltage capacitors before releasing it to the flashlamps in a 400-microsecond burst (see Power Conditioning). 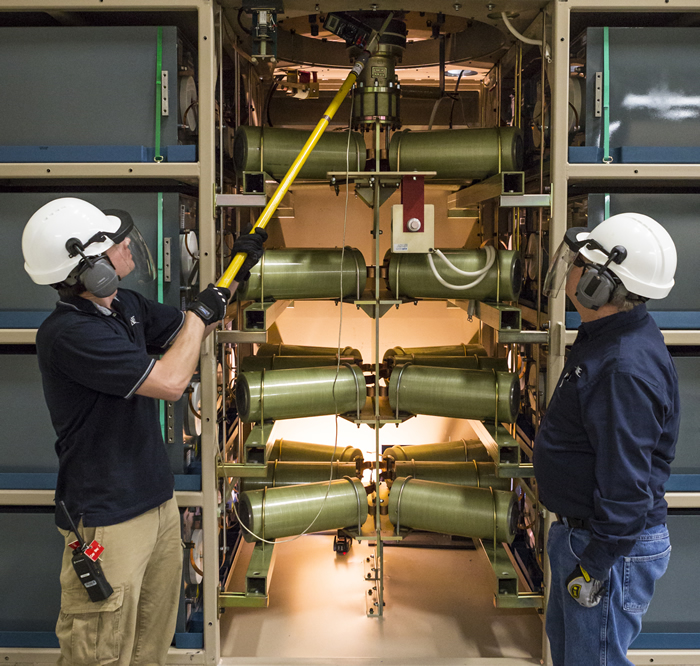 Each capacitor module is charged by two power supplies known as cap chargers, each of which sends electricity to the capacitors at a rate of about 15 kilojoules per second. “We have basically 400 power supplies that have to work during a shot,” said Pulsed Power Group Leader and PCS Systems Manager Bruno Le Galloudec. “No power supplies, there’s no shot, because we can’t charge the capacitors.”

The system’s original power supplies, however, are nearing obsolescence and often require time-consuming and costly repairs—only some of which can be done in the facility. The original vendor is no longer in the power-supply business; a few years ago the PCS Team was able to locate a boutique power-supply repair company, but the owner plans to retire in a few years.

“And so we had a problem on our hands,” Le Galloudec said; “400 power supplies that need to be working and no one to take care of them.”

“We identified one big power supply, a 30-kilojoule (per second), 50-kilowatt power supply, and this will be a drop-in replacement” for the existing power supplies as they need to be replaced, Le Galloudec said. Pulsed-power engineer Glen James worked with an industry partner to modify an off-the-shelf design to fit NIF’s needs.

Each new power supply will replace two of the original units, which run in parallel in master-to-slave mode. Usually only one of the two supplies fails, so when the pair is replaced with a new supply the remaining original unit can be retained as a spare. 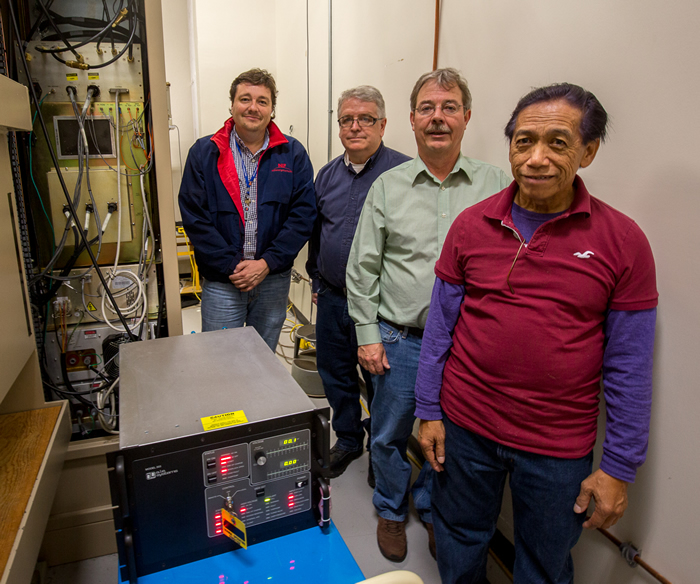 Le Galloudec said the replacements ultimately could cut the system’s maintenance time in half. “Instead of having to take care of two power supplies we take care of one,” he said, “and that will also improve the reliability of the system because you have fewer parts” to maintain, as well as fewer cable connections.

The team worked with the industry partner and NIF software engineer Nattee (Nat) Chotinun to ensure that the new power supply would work with NIF’s Integrated Computer Control System, which governs every aspect of a NIF shot from start to finish. “When we install a power supply like this in the facility we’re going to have to do a database change,” Le Galloudec said. “The power supply has to be seen by the system as if it’s a normal power supply. Nat is developing the patch which will allow us to use this new type of supply and this particular model.”

“Bruno’s whole operating team has been really helpful in test-driving these units,” James added. “Almost everyone participated at one time or another.” Le Galloudec said the PCS operators—Dave Schwedler, Allen Harkey, Mike Mcintosh, Daisy Acosta-Lech, Davis Taylor, Miguel Munguia, Joe Foley, Norris Lao, and Huy Nghiem—have been coming to the PCS lab between NIF system shots to run shots with the new prototypes and prepare them for installation.

“We now have the latest drop-in replacement that we’re ready to evaluate,” said James.“We have just begun testing the second revision of the prototype. So far the prototype is doing quite well.”