More than 300 inertial fusion energy (IFE) researchers and supporters gathered June 21-23 in a virtual workshop designed to explore the science, technology, and investments needed to realize IFE’s potential as a source of safe, clean energy in the coming decades.

Sponsored by the U.S. Department of Energy (DOE)’s Office of Science, the Basic Research Needs (BRN) workshop was chaired by LLNL physicist Tammy Ma and Professor Riccardo Betti of the University of Rochester. It was prompted in part by the groundbreaking Aug. 8, 2021, experiment that brought NIF to the threshold of ignition, along with other recent fusion milestones.

“The breakthroughs in fusion in the last couple of years have generated a lot of excitement and attention,” said Harriet Kung, DOE deputy director for Science Programs. The response included a White House Fusion Summit on March 17 to discuss the promise of fusion to help meet the world’s energy needs and combat climate change and to promote the Biden Administration’s 10-year strategy for developing commercial fusion energy.

The workshop was also a response to recent reports by the National Academies of Sciences, Engineering, and Medicine and an influential DOE advisory committee that recommended stepped-up U.S. investments in fusion energy.

“It is an incredibly exciting time for fusion in the United States.”

“Fusion is a grand challenge that will require innovations and perseverance,” Kung said. “We’re working to ensure that public investment in fusion will provide a solid foundation to move forward and achieve the goal of putting fusion on the (electric) grid.”

The White House summit was preceded by a Feb. 22-24 LLNL-sponsored IFE community workshop on the potential use of inertial confinement fusion (ICF) to generate commercially viable IFE.

Also in the background was a June 1-3 DOE workshop on Fusion Energy Development via Public-Private Partnerships that focused on collaborations between government and businesses as a vehicle to accelerate fusion energy development, including ways to align public and private sector R&D activities to support a milestone-based fusion development program.

Van Dam noted that the President’s Fiscal Year 2023 budget request to Congress, released just after the White House Summit, includes $3 million for the initiation of an IFE research program. While “modest,” Van Dam said, “this request is quite significant in marking a proposed return to funding a research program that had been shelved for a decade.”

In a videotaped message, U.S. Rep. Zoe Lofgren, D-San Jose, a member of the House Committee on Science, Space, and Technology and a longtime fusion energy advocate, said she has been leading a request to the House Appropriations Committee for $600 million for ICF research in fiscal year 2023. “It includes $380 million for NIF to make the necessary repairs to build on the breakthrough (of) last August,” she said.

“Now is the time with these breakthroughs occurring to double down on our investments and make sure that adequate funding for fusion energy research science continues,” Lofgren said. “If we keep our foot on the gas, if we continue to support our scientists, we’re going to have an opportunity for a clean energy future with fusion that saves the planet.”

LLNL Senior Advisor John Edwards told workshop participants that the knowledge gained from decades of ICF research is a “treasure trove” that can be leveraged to “significantly accelerate IFE.”

“The pace of progress in ICF depends on multiple factors including funding and the broader goals of the (National Nuclear Security Administration’s) Stockpile Stewardship Program,“ which funds most current ICF activities, Edwards said.

“An aggressive IFE program would need investment in resources and people to access that infrastructure; many more at-scale experiment opportunities than exist today; a different way of thinking (and) a different mode of operating; and more effective and streamlined mechanisms to partner with industry and academia.” 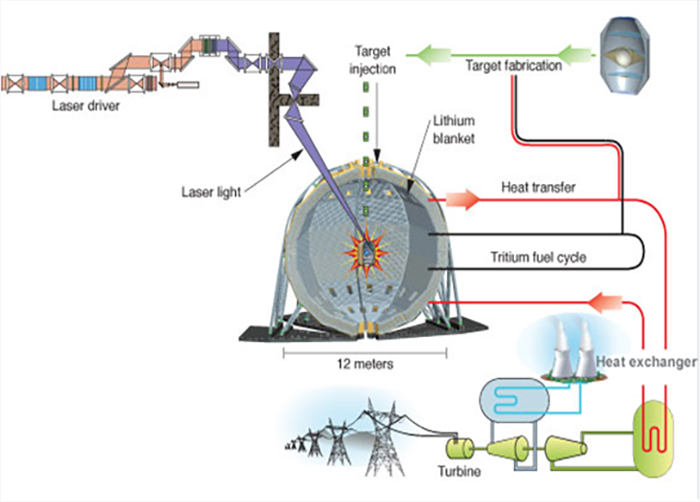 Schematic of a potential IFE power plant: High-repetition-rate laser beams strike a succession of fusion targets injected into a reaction chamber at the rate of about 10 per second, releasing a steady stream of energetic neutrons. The neutrons heat a low-activation coolant, such as lithium-bearing liquid metals or molten salts, surrounding the fusion targets. The coolant transfers the fusion heat to a turbine and generator to produce electricity. A NIF-scale laser operating at this repetition rate would produce more than 1,000 megawatts of electricity for the grid—enough to power a city the size of San Francisco. (Click to expand image.)

Discussing the role of the private sector in advancing IFE research and development, Andrew Holland, CEO of the Fusion Industry Association, said the industry’s vision is to achieve scientific proof of concept for fusion energy by the mid-2020s; design and build pilot plants by the late 2020s; operate the pilot plants and begin selling power by the early 2030s; and achieve commercial fusion energy and rapid scale-up to global deployment by the mid-2030s.

Holland said six private-sector IFE startups already have invested more than $170 million in the technology. “If trends continue, this is the beginning of an exponential curve,” he said. “The public sector has significant capabilities that can be leveraged by private IFE companies. New, milestone-based public-private partnerships will accelerate investment and interest toward the fusion-powered future.”

Also speaking during the workshop’s opening session, which was open to the public:

Following the opening plenary session, the committee of 122 expert panelists invited by DOE participated in 2.5 days of closed discussions and deliberations to address the charge defined by DOE. A total of 24 BRN participants were from LLNL, representing a wide range of expertise. Several Lab participants also served as sub-panel leads on one of the 12 expert panels.

“It is an incredibly exciting time for fusion in the United States,” said Ma, who played key roles in both June workshops. “With the confluence of market forces, the necessary scientific and technological underpinnings to realize fusion, and support in DC coming together, there is unprecedented fusion energy momentum.

“The three days of the BRN were intense and productive,” she said, “and we look forward to working with a great committee to put together an impactful report that will help lay the foundations for an inertial fusion energy future.”

The workshop is expected to provide FES with a set of priority research opportunities that can inform future research efforts in IFE and build a community of next-generation researchers in this area. The workshop’s findings will be summarized in a report to be submitted to FES within four months after the meeting.