Second of two articles describing the benefits to NIF of Discovery Science experiments.

Discovery Science Program researchers seeking to explore the physics of far-flung corners of the universe also have inspired many novel or enhanced scientific measurement tools now used at NIF.

These key diagnostic instruments and techniques, designed to measure magnetic fields, protons, electrons, and other physical phenomena, have become integral to the success of NIF’s primary mission of stockpile stewardship, including inertial confinement fusion (ICF) research.

The diagnostics—combined with other spinoff benefits such as influential peer reviews of unclassified research, strengthened ties with the wider scientific community, and attracting new generations of talented scientists—are “a fortunate side effect of NIF’s ability to do science that no one else in the world can do,” says NIF Director Mark Herrmann. “I think of these diagnostics and tools developed through Discovery Science as more than just spinoffs,” he says. “We couldn’t do our program as well without them.” 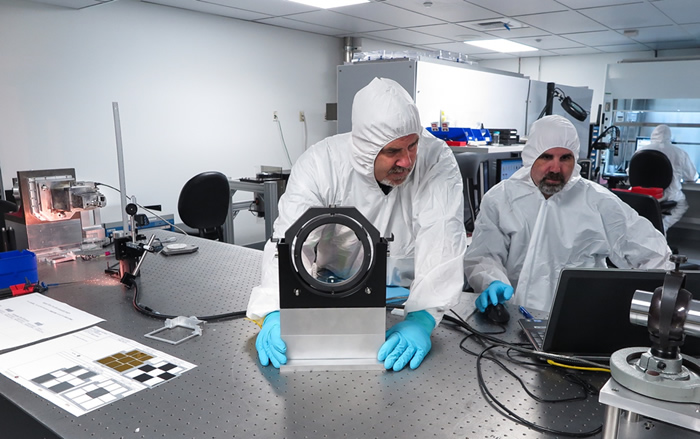 NIF conducts about 400 experiments each year, with about 8 percent of the highly competitive shot time set aside for the Discovery Science (DS) Program. The experiments bring together the best scientific minds from both outside and inside the Lab to take advantage of NIF’s unique ability to conduct high-energy laser experiments in nuclear physics, plasma physics, materials science, and astrophysics.

As its 192 high-energy laser beams converge inside its 10-meter-diameter Target Chamber, NIF can simulate conditions found inside stars, giant planets, and thermonuclear reactions.

“We can reach just about any pressure anywhere in the interior of any planet that we’re aware of,” says Discovery Science Program Leader Bruce Remington. “The discovery of exoplanets has greatly amplified interest in this science.”

That interest stimulated, for example, development of the Gigabar (Gbar) diagnostic platform, which uses spherical convergence to amplify NIF ablation pressures to examine the states of matter under conditions that “equal or exceed the pressures found at the centers of any planets in our solar system,” he says. One Gbar equals about a billion Earth atmospheres of pressure.

The platform “opened up new science and new capabilities for the programs, which modify it for their needs,” he says.

NIF’s own experiments rely heavily on measurements, but new diagnostic tools can require significant investments of time, money, and resources that might not be easy to come by. But when DS researchers require new or upgraded diagnostics, necessity, as the adage goes, is the mother of invention.

That need has produced diagnostic tools such as:

“These are examples of specific diagnostic hardware or techniques that have been developed in direct support of a Discovery Science experiment that then are used on programmatic experiments,” says Senior Target Area Scientist Dan Kalantar. 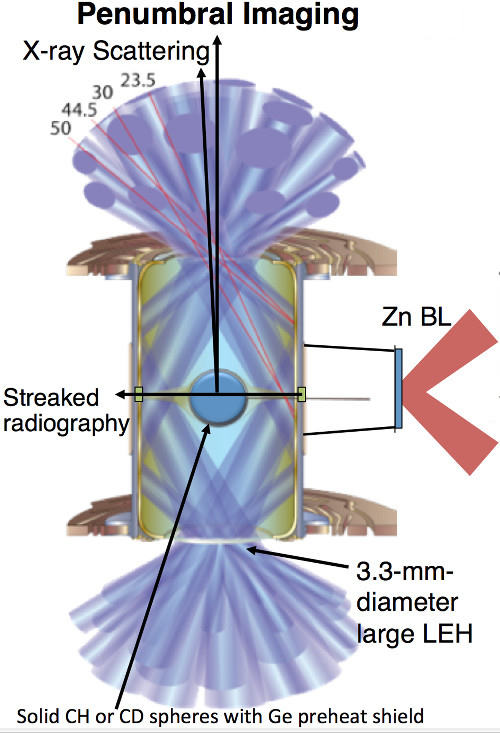 Penumbral imaging was developed by Lab postdoctoral researcher Benjamin Bachmann, working with researchers from U.C. Berkeley’s physics department and the Lawrence Berkeley National Laboratory, when DS was still known as the Fundamental Science Program. Bachmann was the lead author of a 2014 Review of Scientific Instruments paper which detailed the technique to probe the state of matter at pressures up to 1 Gbar. Now, it’s used frequently in ICF experiments.

MACS was designed in 2015 as another version of a spectrometer with a spectral resolution specifically set for a DS experiment that used x-ray scattering to measure warm dense matter in an imploding target.

“They wanted us to (examine) the basic properties of dense, cool plasma at high density, measure the ionization level, and compare it with theoretical models,” Remington says. “It’s the science that underpins our understanding of brown dwarfs and exoplanets.”

The benefit to NIF, Kalantar noted, was “that specific spectrometer, that specific crystal selection, and that specific wavelength coverage in the x-ray region happens to overlap what the HED program is interested in for extended x-ray absorption fine structure (EXFAS) measurements.”

Another example involves the SOP, used in conjunction with VISAR, which are both critical for ICF and HED research. A DS program needed more specific measurements, so the SOP was upgraded. Now for all NIF experiments the instrument’s measurements can provide better physics analysis, Kalantar says.

That also is true for TARDIS (not to be confused with the police call box from the popular British science fiction TV series “Dr. Who”).

NIF’s TARDIS “is a diffraction diagnostic that again ties in to understanding the basic properties of warm, dense matter as you would find inside the interiors of planets,” says Remington.

(Left) The NIF TARDIS package containing the material sample, the x-ray source target on a stalk, and the image plates to capture the x-ray diffraction cones inside the hemispherical cartridge. (Right) Diffraction data obtained during a November 2014 experiment in which a lead sample was compressed to about 3.5 Mbar (million atmospheres).

TARDIS development started about five years ago and included outside experts like Justin Wark, a University of Oxford atomic and laser physics professor. Those experts helped widened the range of data and materials that can be studied. Now it’s become “a very important part” of NIF’s main research, Remington says.

And the WRF is normally 50 centimeters from the NIF target, but minor changes for a DS experiment to bring the WRF closer to the Target Chamber center resulted in a 25-fold increase in sensitivity and allowed a wider range of nuclear reactions under HED plasma conditions to be studied, both for basic science and for the internal programs. 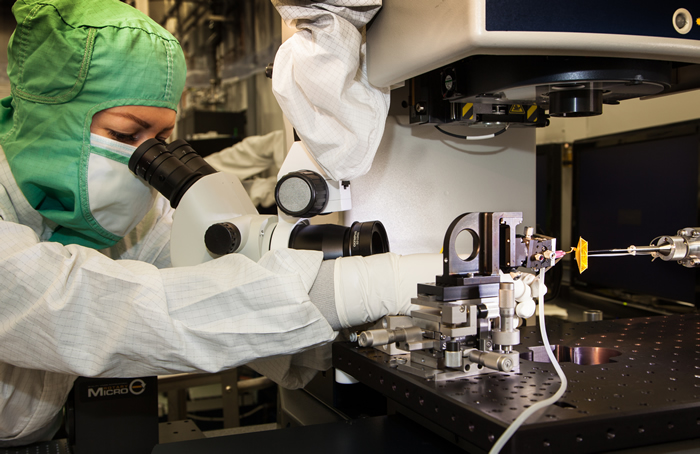 The idea for PRAD originated years ago when MIT senior scientist Richard Petrasso suggested employing CR-39, a plastic polymer commonly used in the manufacture of eyeglass lenses and in radiation detection, to measure magnetic fields generated, merged, or amplified by the plasma flow when lasers are shot into an ICF target.

The technology had been demonstrated and refined elsewhere, including the University of Rochester’s Laboratory for Laser Energetics. More recently, astrophysicists interested in researching those magnetic fields pushed NIF to consider a magnetic field measurement tool.

“Astrophysicists more or less led the charge,” Remington says. “There’s a wide variety of experiments that can be done, but it turns out that it can be quite useful for specific cases in our programmatic work as well.”

Some Discovery Science spinoffs give NIF future flexibility. The NEPPS particle spectrometer wasn’t mission-critical for ICF or stockpile stewardship work, but “the basic science teams needed it because they’re trying to look for particle acceleration in their various experiments—in particular, the astrophysics experiments—so we got that built,” Remington says.

The method of measuring the spray of particles that’s a common occurrence in high-energy astrophysics will become important for detecting how magnetic fields that can lead to “a source of pre-heat in places where we don’t want it” inside a hohlraum, he says.

Yet another idea evolved from DS conversations between Lab scientists and researchers from the University of Maryland and other institutions who are hoping to explore the physics of star formation in stellar nurseries such as the famous Pillars of Creation in the Eagle Nebula (see “Unlocking the Secrets of Star Creation”).

Specifically, the researchers wanted to set up conditions of nonlinear radiative hydrodynamic instabilities that replicate how dense molecular clouds are pushed away from a strongly radiating cluster of young stars, which “shares some similarities with the radiation and capsule physics that we study here (at NIF),” Remington says.

While typical NIF experiments last five to 10 nanoseconds (billionths of a second)—20 at the most—the DS experiment required a radiation drive lasting up to 60 nanoseconds. So, Remington says, the lab-university collaboration came up with a “cute and clever idea” to use three or four separate hohlraums fired in sequence to extend the duration of the radiation.

(Left) A three-hohlraum target designed to mimic the process of star formation, showing the “TriStar” drive hohlraums, the layered foam physics package, and the associated imaging x-ray backlighter target. (Right) The “Eagle” science package is “stood off” from the x-ray generating radiation cavities (the hohlraums) so that the target is directionally irradiated by a cluster of stellar-like sources. The hohlraums are driven for 10 nanoseconds each in series, giving a total x-ray output lasting 30 nanoseconds; later experiments used four hohlraums and extended the laser drive to 60 nanoseconds.

Now, LLNL scientists are highly interested in this concept of long-duration radiation drives and “view this as a new capability that now exists,” he says. “We can push for 60 nanoseconds because we already did this for an experiment. And the concept could be expandable, reaching 100 nanoseconds or perhaps longer.”

The DS program will continue to be a constant source of inspiration for NIF.

“No idea is too grandiose to be out of reach,” Remington says.