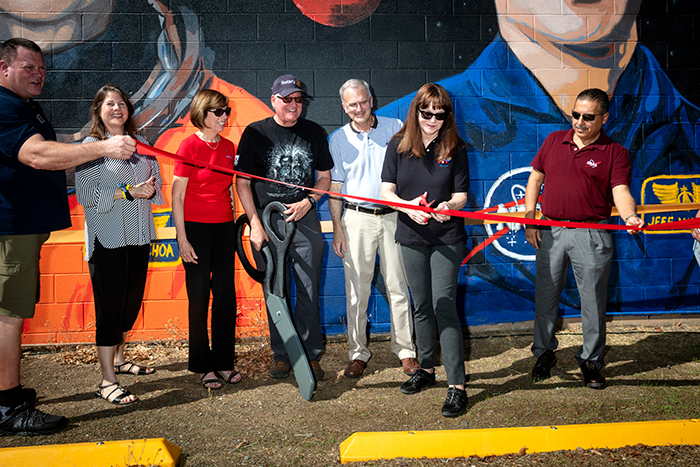 Four former NASA astronauts—all with ties to Lawrence Livermore and Sandia national laboratories—gathered for a Sept. 25 event to dedicate a large mural painted in their honor in downtown Livermore.

For the estimated 150 people who attended, it was a rare opportunity to hear from the four—Jeff Wisoff, Tammy Jernigan, José Hernández, and Ellen Ochoa. They described their exceptional life experiences and shared their wisdom and advice—particularly to the students and youngsters in the audience—around the mural’s message to “Dream Big.”

“They’re a living embodiment and examples of what it means when you dream bigger than anyone can imagine,” former Livermore Valley Joint Unified School District Superintendent Kelly Bowers said in her opening remarks as the host of the event.

The huge, colorful “Dream Big” mural got the full star treatment, including music provided by Element 116, made up of local middle and high school students. Speakers at the event also included Livermore Mayor Bob Woerner, and Janice Bishop, a Livermore High School graduate who is senior research scientist at the SETI Institute, which is a contractor with NASA Ames Research Center in Mountain View.

The mural features astronauts Wisoff, the principal associate director of the NIF & Photon Science Directorate; Jernigan, former senior advisor to the LLNL Director’s Office of Defense Coordination; Hernández, the son of Mexican migrant farmworkers and a former LLNL engineer; Leroy Chiao, a former LLNL research engineer and a graduate of Monte Vista High School in Danville; and Ochoa, a former researcher at Sandia and the former director of the Johnson Space Center in Houston. 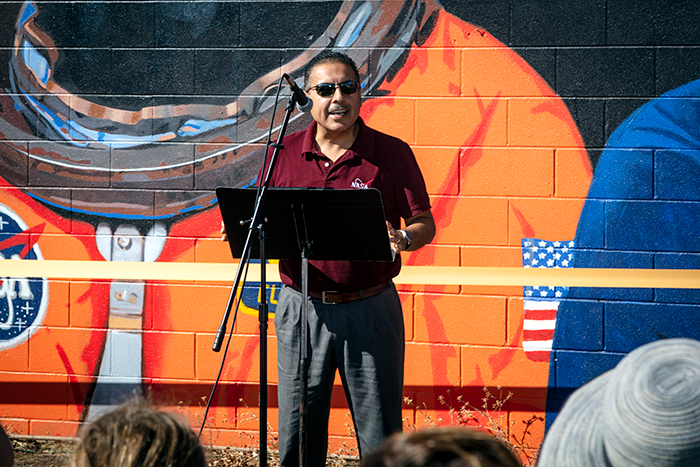 José Hernández tells the crowd his journey from farmworker to LLNL engineer to NASA astronaut and shared his father’s “simple five ingredient recipe” for success.

Hernández, whose remarkable life story as a former farmworker to LLNL engineer to NASA astronaut will be the subject of an upcoming Amazon biopic, recalled being “mesmerized” at the age of 10 as he watched the final Apollo mission on TV and saw astronaut Gene Cernan walk on the moon.

“I knew at that point that I wanted to be an astronaut,” he said. Instead of dissuading him, Hernández’ father sat him down at the kitchen table and gave him “a simple five ingredient recipe” to accomplish his dreams.

“First, he empowered me into believing that I can do it—the power of empowerment of a parent on the kid,” Hernández said. “Second, he said follow these five simple steps. He said define your goal in life. Recognize how far you are from it. Draw yourself a roadmap so you know how to get there. Prepare yourself according to the challenge you selected.

“And the same work ethic you put out as a farmworker picking fruits and vegetables seven days a week during the summer and Saturdays and Sundays during school—he pointed to my books on the kitchen table—you put that effort there, and when you graduate college, you put it in your job,” Hernández continued. “His parting words that evening was ‘Always give more than what people ask for. Always give more. Mix that up and that’s the recipe for success.’”

Hernández added one last ingredient to his father’s recipe—perseverance.

“You cannot give up on yourself,” he said. “Typically, we’re our own worst enemies. We give up. Human tendency is to give up after two or three failures. And I’m here to tell you guys that NASA rejected me not once, not twice, not three or four times. It was 11 times.

“It wasn’t until the 12th time, and people say, ‘Well, did you get tired of it?’ I said ‘No.’ Because part of selecting a goal is you have to enjoy the journey.”

Chiao wasn’t able to attend, but sent a message read by Burnham in which he described his extensive ties to the Livermore and San Ramon valleys, his motivation for becoming an astronaut, and his message to students.

“I’m honored to be a part of this mural,” Chiao said. “Give my thanks to Alan (Burnham), the artists, and everyone who made it possible. I was inspired as a young person to strive to become an astronaut when I watched the Apollo 11 moon landing in 1969.”

Chiao noted his upbringing in Danville and Livermore and said both he and his father worked at LLNL. “Because of my personal and family connection to Livermore, I’m proud and pleased this mural has been created in the community,” he said. “I’m sure that the mural will serve as an inspiration to this generation of young people to see the several astronauts who have strong ties to the area.”

Ochoa was 11 when the Apollo 11 astronauts landed on the moon and recalled the moment. “At that time, there weren’t any women astronauts, no astronauts of color,” Ochoa recalled. “Nobody would have asked an 11-year-old girl, “Is this something you’d like to grow up and do?’”

When Ochoa attended college, she turned her attention to science and engineering and wanted to pursue a career as a research engineer. She attended graduate school at Stanford University, and the space shuttle flew for the first time at the end of her first year. Soon after, everything began to click for her.

In 1983, Sally Ride became the first American woman to fly in space. Ride had also been a physics major at Stanford, where Ochoa was getting her Ph.D.

“I think I really needed to see all of those things for it to occur to me that this was something that I could do, or that I could at least aspire to,” Ochoa said. “When I think back, certainly a role model like Sally Ride and the other women in her class of six women made a big impression on me. My hope is that this mural will make an impression on particularly the students of this community and anybody who visit it.” 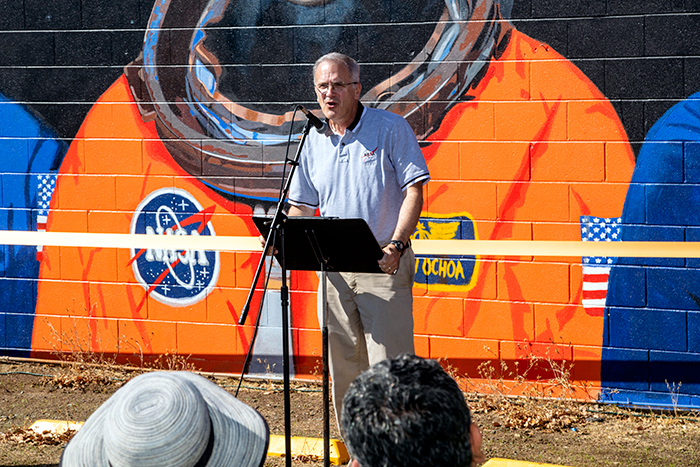 Jeff Wisoff, principal associate director of NIF & Photon Science Directorate, describes his “Dream Big” advice to the crowd and encourages  the youngsters in the crowd to “Just go for it—and have fun.”

Wisoff followed Ochoa, and thanked the artists, mayor, and everyone associated with the event.

“This mural is really incredible,” he said. “First of all, I want to thank you for the theme of dreaming big because I really do think those words captured the spirit of exploration, which is part of the American soul and is alive and well in our community through the national labs and the Quest Science Center.”

“When I think about dreaming big, the first thing you have to do is to articulate to yourself what your goal is, and to think about why it’s important  because that will lead to the second ingredient, which is commitment,” he said. “Commitment is probably the most important of all the goals because commitment will lead to excellence because through commitment, you will acquire the skills to do the work and to persevere to succeed.

“And if you do those two things correctly, then the third ingredient comes naturally, which is having fun, because the fun you have will be directly proportional to the degree to which you excel and the commitment that you make.”

Wisoff added: “I hope the young people out there are as excited as I was as an 11-year-old growing up and seeing the United States go to the moon for the first time. And, for many of you at your early age, you won’t know what mission you’re on for life. But when you find it, I beg for you to understand what its impact is and to really commit to it. Just go for it—and have fun.” 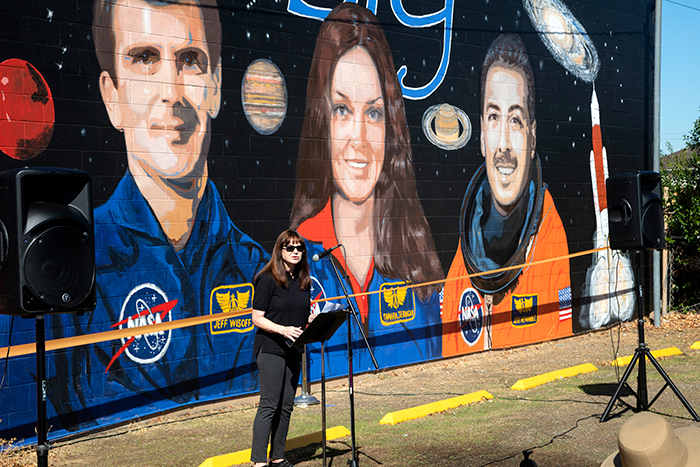 Former NASA astronaut Tammy Jernigan addresses the crowd in front of  a mural image of her, flanked by her husband Jeff Wisoff and José Hernández.

Jernigan, who is married to Wisoff, then spoke and recalled the excitement she felt as a child when Apollo 11 touched down on the moon—about 240,000 miles away. “I remember stepping out into the street near my Southern California home and gazing at the moon and thinking how exciting it was that while I was looking at the moon there were actual human beings on it,” she said. “This made me believe that anything is possible, and it encouraged me to pursue things that I thought were beyond my reach.”

“I encourage you to take advantage of all they have to offer,” she said. “Talk to your parents and teachers about what interests you. Get out there and find out what excites you, so that you can discover the real joy of learning that comes from your own intellectual pursuits.

“It is my sincere hope that you will be curious enough to explore, confident enough to be brave, and most of all, I hope you will never stop believing in yourselves and pursuing your dreams,” she said. “And as the great President Abraham Lincoln said, ‘The best way to predict the future is to create it.’ ”