When NIF’s high-energy lasers strike the inside walls of a hohlraum target, they generate a common, but highly unpredictable, state of matter called plasma.

Determining the characteristics of this volatile concoction of free electrons and ions (atoms that have lost some or all their electrons) is one of the biggest challenges researchers face as they work toward achieving ignition on NIF—a self-sustaining fusion reaction that produces more energy than the energy absorbed by the target.

To further their quest for ignition, LLNL scientists and engineers have developed a complex and sophisticated state-of-the-art diagnostic tool, the Optical Thomson Scattering Laser System, or OTSL, for measuring the plasma conditions inside the hohlraums that drive inertial confinement fusion (ICF) implosions as well as in other high energy density systems.

Technicians prepare the OTSL diagnostic load package (DLP) for transport to the NIF facility in July 2019. The DLP was installed and facility commissioning shots began in September 2019.

The optical Thomson scattering technique has a decades-long history of usefulness for characterizing plasma, but the OTSL adds a new wrinkle: an intense, deep-ultraviolet (211-nanometer) laser probe that will reveal the temperature, density, and flow velocity in a small section of the hohlraum plasma with greater precision than previously possible.

Measuring the required plasma parameters in NIF required the development team to meet a number of technical challenges that make the new system a world-class measurement tool (see below).

The details of hohlraum plasma behavior are important because the plasma can interact with the NIF laser beams as they enter the hohlraum and disrupt the distribution of energy (see “How NIF Targets Work”). Loss of energy can cause an asymmetric implosion of the hydrogen-filled target capsule suspended in the hohlraum. Near-perfect spherical symmetry is a vital requirement for ICF implosions to reach the high densities and temperatures required for fusion-induced self-heating leading to ignition.

“Knowing the temperatures and densities inside the hohlraum is one of the best indicators of how the hohlraum is performing,” said LLNL physicist Steven Ross, lead scientist on the OTSL project. “And it’s something the (ICF implosion) models have struggled to accurately predict over the years.

“The density and temperature impact how the laser beams propagate and how symmetrically we can drive and deliver energy to the capsule,” he said.

Better understanding of the laser-plasma interactions and the other complex physics inside the hohlraum “should lead to improved predictive capability and a more well-behaved hohlraum in the future,” Ross said. “It should effectively reduce the number of shots it takes to get to a target platform that performs very well.” 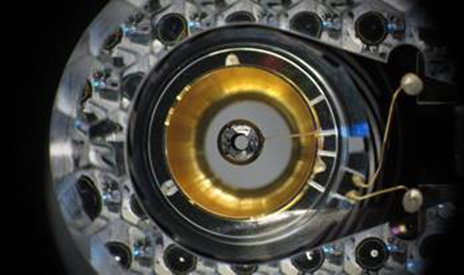 Top-down view of an OTSL target capsule in a hohlraum. The capsule has large concentric holes aligned with the hohlraum axis to create a line of sight for the OTSL diagnostic to measure the hohlraum environment and reduce background.

One immediate benefit of the OTSL will be to help fine-tune the exchange of energy between the overlapping laser beams as they enter the hohlraum, a technique known as cross-beam energy transfer, or CBET. Slightly changing the wavelength of one or more sets of beams can redirect the energy to improve implosion symmetry. CBET has played a key role in recent Hybrid-E experiments on NIF that have increased the amount of energy absorbed by the target capsule, the fuel kinetic energy, and hot-spot internal energy, resulting in significant improvements in implosion performance.

Thomson scattering is also expected to further scientists’ understanding of laser-beam propagation, energy backscatter, and energy losses and asymmetries due to such factors as hohlraum wall blow-in and wall-gas mix, x-ray conversion, hot-electron preheat, and re-amplification.

On Dec. 29, 2020, the first scattered signal from an HED plasma probed by the OTSL laser was captured on the OTS diagnostic’s time-resolved detector. Using a simple gold sphere target to provide the plasma, the commissioning measurement demonstrated diagnostic timing, diagnostic alignment, probe-laser alignment, and laser-target interaction.

“This project started about five years ago,” said LLNL engineer Scott Winters, section leader for NIF Target Diagnostics, “and it’s progressed all the way up to this point, this major milestone of collecting data for the first time.

“This is an incremental process to ultimately get to more complicated experiments,” he said. “We can exercise the system using the plasma from a gold sphere to show the laser is working, the diagnostic is working, and then we can pull it all together and do it at the time scales that happen on NIF.

“We’re going to continue this year progressing to gradually tweaking, working out little issues that you have to work out gradually,” Winters said.

Another gold-sphere experiment is scheduled for this spring to ensure that the system has been completely purged of air, water, and moisture, which can absorb the OTSL’s ultra-short wavelengths. This will be followed by a hohlraum experiment to measure the low-density plasma during the “foot,” or first stage, of the NIF laser pulse.

Thomson scattering is the scattering of an electromagnetic wave by free electrons. Sending a laser probe into a plasma stimulates the electrons to oscillate and produce radiation in the form of visible or ultraviolet light that can be measured by the OTS diagnostic. Two features in the scattered light spectrum provide information on hohlraum plasma conditions: the electron plasma wave (EPW) measures electron temperature and electron density, and the ion acoustic wave (IAW) measures ion temperature, plasma ionization, and plasma flow velocity.

Diagram of the detector for the OTSL diagnostic, one of the most complex optical diagnostics yet deployed on NIF. The assembly includes a telescope, high-resolution ion acoustic wave (IAW) and low-resolution electron plasma wave (EPW) spectrometers, a unique optical streak camera in a vacuum-sealed airbox, and a diode for measuring temporal shape. The system, which is inserted into the Target Chamber by a diagnostic instrument manipulator (DIM), can enter the Target Chamber from either the top (polar) or side (equator).

The OTSL system is designed to probe deep ultraviolet wavelengths ranging from 160 to 300 nanometers and is accomplished with EPW and IAW spectrometers. The probe laser uses a 5 omega (5ω) wavelength, the fifth harmonic, or about one-fifth the wavelength, of the initial infrared (1,053-nm) laser that seeds the process. The 5ω probe will be used to generate the scattered signal for plasma densities of 5×1020 electrons per cubic centimeter (cm3). The system can also be configured to run with a NIF beam operating at 3ω (351-nm); that probe will be used for experiments investigating lower-density plasmas of 1×1019 electrons/cm3.

The OTS diagnostic, previously used as a 3ω system, had to be modified and updated to work appropriately with 5ω light.

“All of the previous Thomson scattering systems typically collect the scattered light and propagate it out of the Target Chamber through a diagnostic window,” Ross said, “and then it goes to the diagnostic out in the Target Bay. We knew that wasn’t going to work for us at 5ω. So the whole collection system is built inside the DIM, and that allows us to operate the vast majority of the system in a vacuum, where these deep UV wavelengths can propagate.” 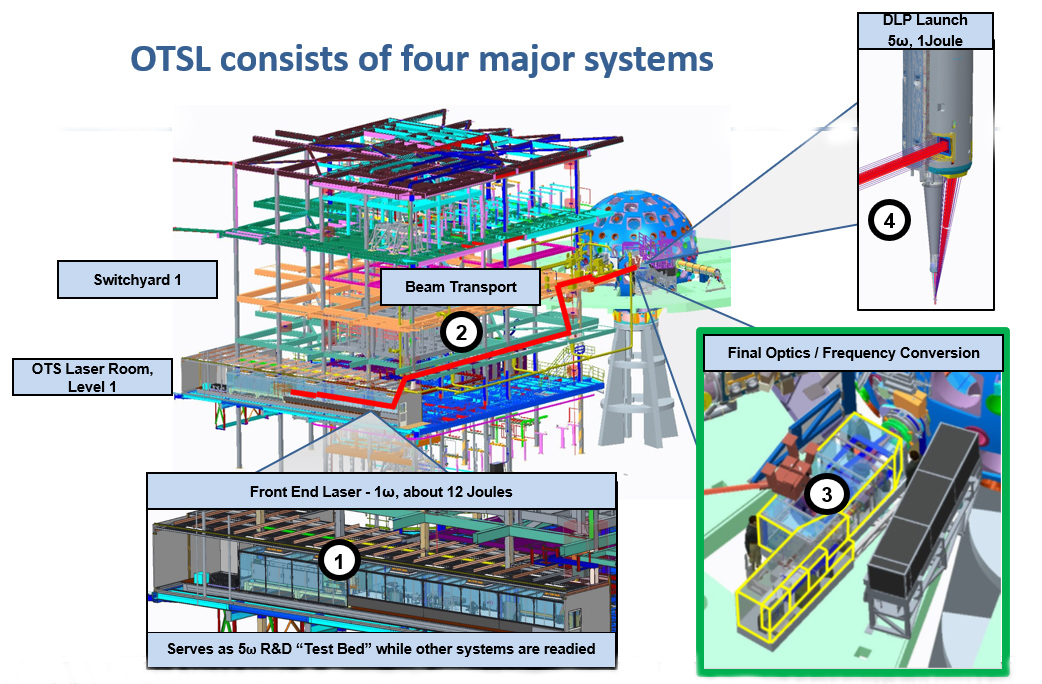 The OTSL laser, housed in a recently constructed room (1) in NIF’s Switchyard 1, includes a small booster amplifier that generates a 1ω, 12-joule beam that’s transported hundreds of meters to the Target Bay through a series of mirrors (2). Just outside the Target Chamber, a final optics and frequency conversion system (3) converts the light to 5ω. The diagnostic load package (DLP) launch system (4) contains optics that align and focus the probe beam through the laser entrance holes to a precise spot in the hohlraum. 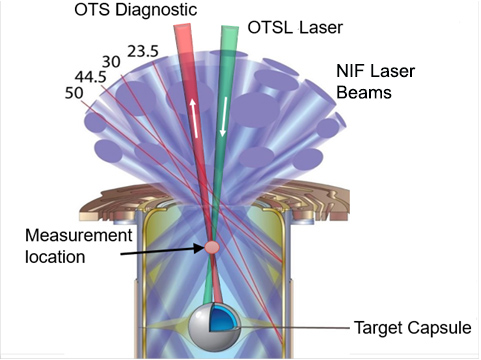 The OTSL laser interacts with a specific 50-micron region of the plasma called the Thomson scattering volume, providing a highly localized measurement of plasma conditions in the target.

“This very large, very complex system with all its complications is needed to generate and deliver 5ω light,” Winters said. “It’s pretty incredible when you think about that. This system is the first time in the world that 5ω light has been produced at this energy level.”

“OTSL is similar in complexity to ARC (NIF’s Advanced Radiographic Capability),” added Mark Bowers, the project’s chief engineer. “ARC was bigger, but this one is really complex and difficult. A lot of new technology had to go into OTSL that had to go way beyond the current state of the art.”

A Variety of Challenges

As might be expected for a project this complex, OTSL needed to overcome a number of scientific and engineering challenges to reach its current level of success.

In particular, said LLNL engineer Phil Datte, “the greater than 1-joule laser probe is required to operate at 211 nanometers and a pulse width of 1 to 2 nanoseconds, resulting in a gigawatt (billion-watt) laser system.”

The system required new types of optics coatings and a large-scale, hermetically sealed, nonlinear CsLiB6O10 (CLBO) conversion crystal. The crystal, developed by the laser company Coherent, “is the largest of this this type known to be operating on a laser system,” Datte said. “Livermore scientists and engineers had to do extensive development to properly utilize this optic.”

Also, early in the system’s development researchers found that the intense flux of x rays produced when NIF’s laser beams strike the inside surface of the hohlraum made the hohlraum’s window opaque to OTS light (see “Probing the Mysteries of Hohlraum Plasmas”).

Under the guidance of experimental physicist George Swadling, LLNL researchers and their colleagues at the Laboratory for Laser Energetics (LLE) at the University of Rochester were able to mitigate this x-ray “blanking” by placing a diagnostic snout filled with pressurized xenon gas between the hohlraum and the OTS diagnostic. The x rays are absorbed by the xenon, but the xenon is transparent to the UV light measured by the OTS system. 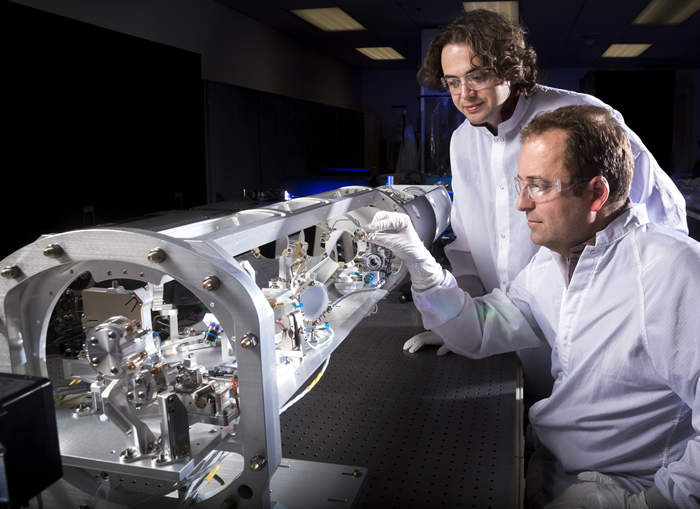 More recent challenges outlined by Bowers included creating a special timing target to time the OTSL to better than 100 picoseconds (trillionths of a second) and developing the DLP alignment hardware to align the probe beam to the required accuracy.

“And then, in September, on one of the OTSL shots we got zero signal,” he said. “That’s when we figured out that physics was going on that we didn’t anticipate, which had converted some of the NIF laser light to stimulated Raman scattered light that went right up into the DLP and destroyed many of the optics in the DLP.”

The researchers had to replace the damaged optics and change target designs to prevent the scattered light from getting into the DLP.

“Any big project that’s worth doing won’t be easy,“ Bowers said. “It sounds easy until you get into the details, and then you find out how hard it really is.”