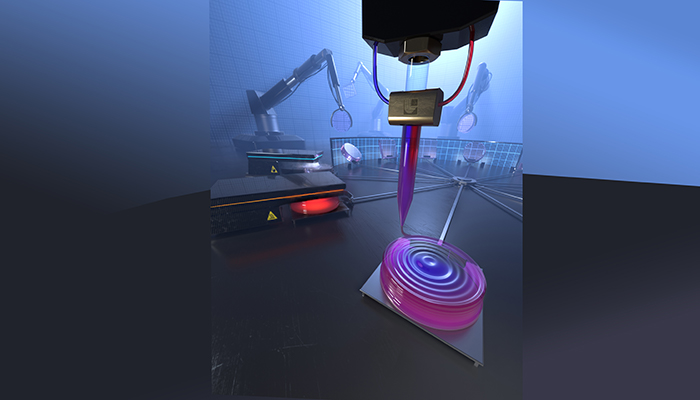 The new technique could achieve a variety of conventional and unconventional optical functions in a flat glass component (with no surface curvature), offering new optical design versatility in environmentally stable glass materials.

The team was able to tailor the gradient in the material compositions by actively controlling the ratio of two different glass-forming pastes or “inks” blended together inline using the direct ink writing (DIW) method of 3D printing. After the composition-varying optical preform is built using DIW, it is then densified to glass and can be finished using conventional optical polishing.

“The change in material composition leads to a change in refractive index once we convert it to glass,” said LLNL scientist Rebecca Dylla-Spears, lead author of a paper that appeared Nov. 18 in Science Advances.

Laser systems such as NIF, the world’s largest laser system, rely on precisely calibrated optics such as mirrors, lenses, and other components. In that way, NIF is similar to eyewear, handheld cameras, and virtual reality systems.

Gradient refractive index (GRIN) optics provide an alternative to conventionally finished optics. GRIN optics contain a spatial gradient in material composition, which provides a gradient in the material refractive index—altering how light travels through the medium. A GRIN lens can have a flat surface figure yet still perform the same optical function as an equivalent conventional lens.

GRIN optics already exist in nature because of the evolution of eye lenses. Examples can be found in most species, where the change in refractive index across the eye lens is governed by the varying concentration of structural proteins.

The ability to fully spatially control material composition and optical functionality provides new options for GRIN optic design. For example, multiple functionalities could be designed into a single optic, such as focusing combined with correction of common optical aberrations. In addition, it has been shown that the use of optics with combined surface curvature and gradients in refractive index has the potential to reduce the size and weight of optical systems.

By tailoring the index, a curved optic can be replaced with a flat surface, which could reduce finishing costs. Surface curvature also could be added to manipulate light using both bulk and surface effects. 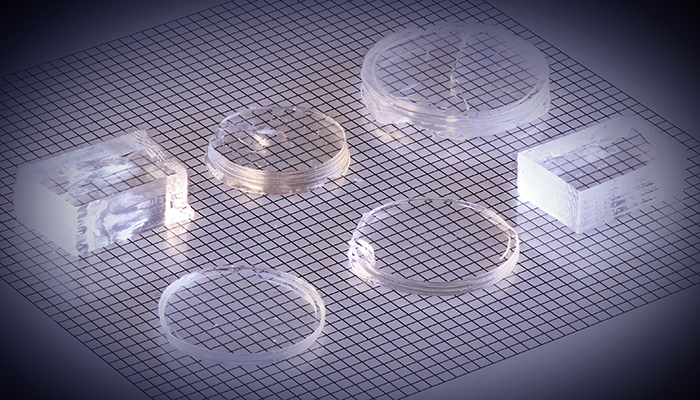 An array of polished, 3D printed gradient refractive index lenses made of titania-doped silica glass. Grid squares are 1 millimeter on each side.

The new technique also can save weight in optical systems. For example, it’s critical that optics used by soldiers in the field are light and portable.

“This is the first time we have combined two different glass materials by 3D printing and demonstrated their function as an optic. Although demonstrated for GRIN, the approach could be used to tailor other material or optical properties as well,” Dylla-Spears said.