A Nuclear Engineer with a Passion for Fusion Energy 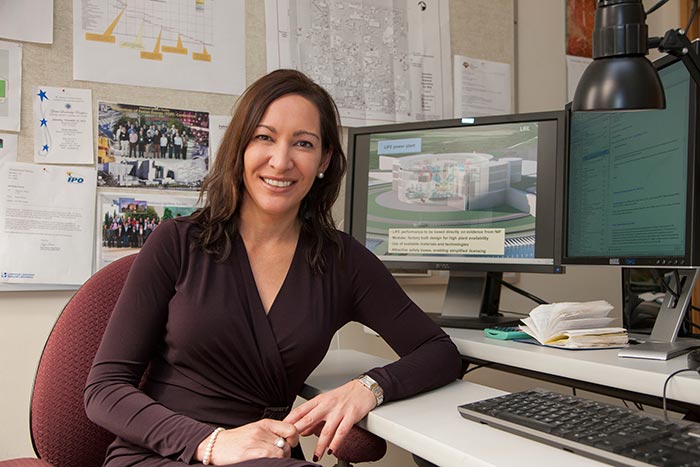 You went to college in Madrid, Spain. What made you want to come to LLNL to work?

When I was a student in nuclear engineering in Madrid, I saw a presentation about the plans to build NIF and I knew I wanted to be a part of the effort to develop fusion as a safe, clean and sustainable energy source. Then in 1999, I had the opportunity to come to LLNL to perform doctoral research on safety analyses of inertial fusion energy power plant designs and ended up accepting a career offer as staff engineer when I completed my degree in 2001.

You have been active in the Expanding Your Horizons program. Tell me about that.

I really enjoy participating in local events such as Expanding Your Horizons that encourage junior high and high school students to pursue careers in science and engineering. I especially enjoy talking to female students. It feels like you can have a positive impact on them just by responding to their career questions and encouraging them to follow their dreams.

Were there any influential women or scientists who inspired you to pursue a career in nuclear engineering?

I wish I could say yes, but the truth is that all my professors and mentors during my college years in Madrid were men. On the positive side, I must say that there is a noticeable increase in the number of young Spanish women enrolled in the engineering school now compared to when I was a student.

What is your specific field of expertise?

I’ve been working in the area of fusion safety and environmental studies, including licensing aspects, for more than 14 years. During that time, I have been a part of several inertial and magnetic fusion projects, including NIF. For example, I helped analyze neutron behavior and simulate how fusion reaction debris and high neutron yields would affect NIF optics and diagnostics and was part of a multi-laboratory effort to develop a repetitively pulsed laser facility for inertial fusion energy, a precursor to the Laboratory's Laser Inertial Fusion Energy, or LIFE, effort.

You also worked on the ITER project, the world’s largest tokamak nuclear fusion reactor being built in France.

Yes, from 2006 to 2010, I took a leave of absence from LLNL to join the team at the International Thermonuclear Experimental Reactor, known as ITER, where I was responsible for the preparation of safety design guidelines and coordination of safety analysis for ITER licensing. ITER is a large-scale scientific experiment with the goal of demonstrating fusion ignition using strong magnetic fields, rather than lasers.

How was this experience helpful to you when you returned to LLNL?

When I returned, I joined the LIFE effort in 2010. It was an exciting time to come back because ignition experiments were under way at NIF, and the LIFE concept for commercial fusion power plants was taking shape. So, I began leading the LIFE licensing activities, drawing on my experience with ITER, which was the first fusion facility to be licensed by a nuclear regulatory body. I also direct the fuel cycle design. In the LIFE design, the fusion chamber wall includes a one-meter-thick lithium “blanket” that absorbs the fusion output energy. Its heat is used to drive a steam turbine and produce electricity, but the blanket also produces tritium through reactions with the fusion neutrons. This efficient fuel cycle design enables the power plant to produce a key component of its own fuel.

You are also active in fusion energy professional societies.

Yes, I was elected vice-chair of the American Nuclear Society Fusion Energy Division in 2012 and will be the Division chair during 2014-2015. Through these roles, I help promote the development of fusion as a sustainable energy source and work with various organizations on fusion technology issues. I also serve on the executive committee for the ANS Northern California section, which organizes events related to nuclear science and technology in the San Francisco Bay Area.

In 2012, I was very fortunate to receive the ANS Mary Jane Oestermann Professional Women’s Achievement Award, which recognizes “leadership in developing detailed hazard and safety analyses for both inertial and magnetic fusion facilities, including NIF and ITER, and future power reactors.” This award is given annually for outstanding personal dedication and technical achievement by a woman in the fields of nuclear science, engineering, research or education.

Now is a unique moment to be representing fusion energy on behalf of the ANS Fusion Energy Division and the Northern California region, with the efforts at NIF to demonstrate ignition gaining momentum.

You clearly are excited about and enjoy your work.

Yes, I’ve spent my whole career in nuclear fusion technologies. Being involved with NIF and the pursuit of ignition—it couldn’t get more exciting than this.

Video: Susana discusses her path to science, the conflicting messages young women receive about what it takes to be popular and successful, and what fuels her passion for her research in fusion energy.