A Fast-Paced Life On and Off the Track 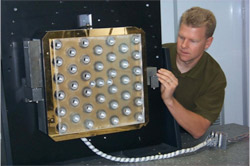 Stereotypes—popular beliefs about “types” of people—are rarely accurate, if ever. For example, some might not think a stereotypical NASCAR driver would be a Ph.D. engineer, or vice versa. But Scott Winters, the associate division leader for LLNL’s Laser Systems Engineering and Operations (LSEO) Division supporting NIF, is both of those.

A go-kart driver as a youngster and mini-stock car driver as a teen, Scott has been racing NASCAR grand American modified cars for the past 15 years.  His dad introduced him to go-karts when he was 8 years old, and he hasn’t looked back. He races primarily on the west coast, in California and Nevada, with the Stockton 99 Speedway and All American Speedway in Roseville his home fields.  He has six track championships and three consecutive wins at the Fall Classic at The Bullring at Las Vegas Motor Speedway.

Though he owned his own racecar in the 1990s, he says that’s too expensive and time-consuming unless it’s your full-time job.  He now drives for the Ferrai-Kramer team owned by walnut farmer Wayne Farrari and engine builder Don Kramer. 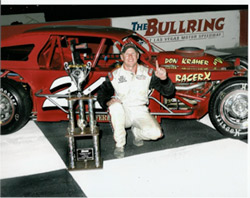 Winning at The Bullring in Las Vegas.

“There are risks associated with racing, as there are with anything,” Winters admits, “but there are also many safety precautions taken, both in the preparation of the car and in the types of equipment used.”  Winters races about 20 times a year and says it’s about the same time commitment as being on a travelling softball team.

When not racing, Scott is dedicated to managing the more than 400 people in LSEO—the technicians, designers, and engineers who support the various functions of NIF.  “We manage the engineering quality and technical quality in the design, building and maintenance of the hardware in NIF,” he says. “We also do a lot of research-related work in the photon science area.”

Scott is a mechanical engineer who earned his bachelor’s and master’s degrees at UC Davis. He joined LLNL right out of college in 1993 as a precision engineer in the Atomic Vapor Laser Isotope Separation (AVLIS) program. He took advantage of the Laboratory’s joint educational program with UC Davis and earned his Ph.D. while still working at the Lab in 1998.

In 1995, he was asked to work on the adaptive optics system eventually used for NIF, which was prototyped on the Beamlet laser. He went on to work on the development of NIF’s deformable mirror, at a scale to meet NIF’s needs and requirements that had never been done before.

“The engineering involved in NIF has been so challenging and is always pushing the envelope,” he says.  “Getting to participate in the early design, the groundbreaking, build, assembly and commissioning—to be a part of the whole cycle—has been a fantastic experience for me.

“I have a memory after the groundbreaking of standing in a field where a pole was in the ground and thinking, someday, there will be a target chamber here.  And now there is! 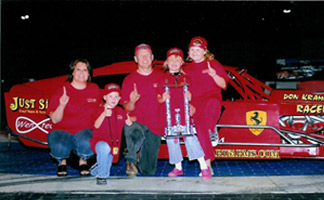 Scott and his family celebrate his 9th win at Roseville.

“I work with a lot of smart, motivated people,” he says. “Combine that with the mission, and you have a very dynamic environment.” For someone used to racing around a track at 125 miles per hour, that’s saying something.

Asked if he thought his children might follow in his footsteps and race cars, Scott says, “my youngest daughter wants to be an astronaut, her twin brother is primarily focused on Legos right now, and my oldest daughter is into art, so the jury is still out on that.” He says at this point, he just enjoys participating in their activities, which includes assistant coaching Little League teams and just being there when needed—a nice balance for his fast-paced life.