Engineering a Better Way to Power the World 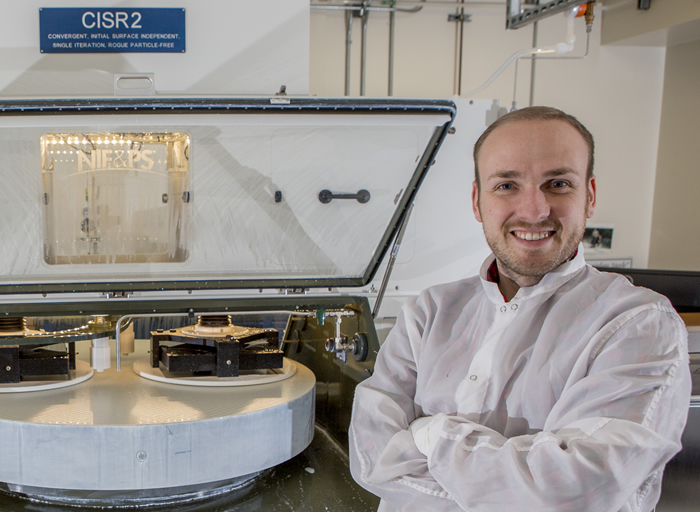 Robert Plummer is on a quest for what he considers the Holy Grail of sustainable energy. And after one look at NIF on a graduate school field trip, he says, “I was blown away by the facility and just thought: ‘This is it, this is where I want to be.’”

After earning his master’s degree in structural engineering and geomechanics from Stanford University, Plummer landed his first job at NIF. Some eight years later, he is a group leader for engineering in the Optics and Materials Science & Technology organization. It is a job, he likes to say, that’s vastly different from what he trained for.

Born and raised in Norway in a family in the oil industry, as a child he moved to the Houston area, where he graduated from high school and then college at nearby Rice University. His studies and internships focused on civil and environmental engineering, on subjects like structural analysis of big superstructures such as offshore oil-drilling platforms. At first, he believed his future was to follow his heritage in the centuries-old world of fossil-fuel extraction.

In graduate school, however, his ambition shifted to exploring alternative energy. When Stanford brought his class to tour NIF, he learned about the work being done here in support of NIF’s missions, particularly the pursuit of energy through inertial confinement fusion. “I was fascinated by the idea of the Holy Grail of energy,” he says, “and when they (NIF tour leaders) said, ‘Well, we do fusion,’ I knew I wanted to be a part of it.”

Plummer’s personal mission statement puts it this way: “My passion is helping advance how societies obtain and use energy. Over the course of my career, I will help create an economically, environmentally, and socially sustainable solution for powering the world.”

Currently, Plummer is in charge of the engineering group responsible for the machines that process the sophisticated NIF optics. NIF’s 192 beams deliver more than 500 trillion watts of peak power and 1.85 megajoules of ultraviolet laser light to a tiny target the size of a peppercorn. If these ultra-high-energy beams encounter any flaws or contamination on the optics, they can become pitted like the windshield on a rocket.

Handling NIF’s optics is a long way from engineering the massive structures that Plummer trained for in engineering school. But he has found that the engineering challenges at LLNL stretch his skills beyond anything he could have imagined. His accomplishments include a major data acquision and cabling design upgrade for a DIM (diagnostic instrument manipulator) in the NIF Target Chamber.

Plummer considers his greatest engineering accomplishment so far, however, to be the production scaleup of an optics polishing machine that is based on the principles of convergent polishing, an R&D 100 award-winning technology.

He says the impetus for the machine came from a challenge by his boss, Tayyab Suratwala, program director for Optics and Materials Science & Technology. “He (Suratwala) said, ‘I’d like you to build me a machine based on the technology that we’ve demonstrated on smaller parts and make it polish two NIF-sized optics simultaneously.’” 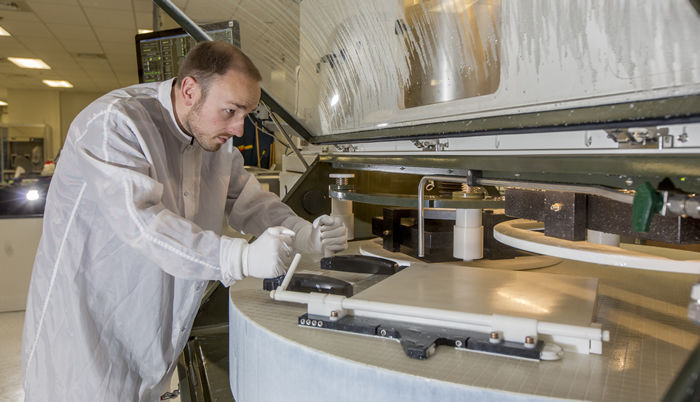 Plummer’s team scaled up the initial small-scale CISR1 machine to the next generation of convergent polishers, CISR2, to work on NIF-sized large-scale optics—with the added ability to polish two optics at once. Once the process is fully commissioned, the machine will be able to process two NIF-sized optics in less than eight hours per optic in a self-programmed operation.

A new optic starts as a rough glass slab, called a workpiece, inside the CISR2 machine in a soggy milk-colored slurry, hermetically sealed at near-100-percent humidity to keep the slurry particles from drying and hardening—which can cause scratches—and preventing the introduction of “rogue” particles—which can increase susceptibility to laser damage.

As the optics converge to their final flatness, they ride on a spinning granite slab measuring 60×8 inches. They’re held within an assembly called the “spider,” allowing the optic to “translate” loosely in the horizontal plane to help achieve uniform removal. The spider assembly contains the polishing weight tray into which a total of 300 pounds can be loaded, which enables polishing at up to one pound per square inch. 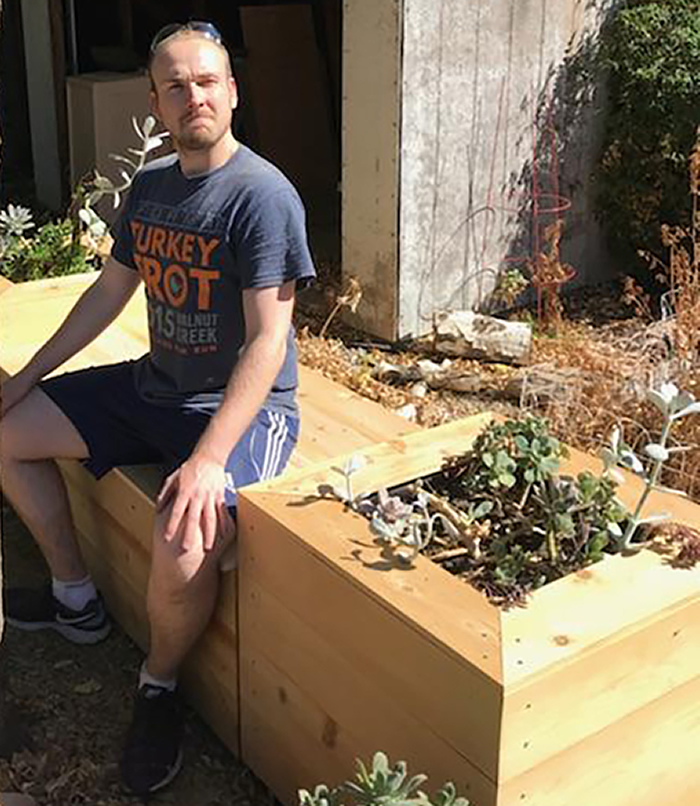 Plummer at home with an example of his woodworking skills.

Suratwala estimates the development of CISR2 can yield major program savings and technology transfer opportunities for the Lab. Cutting processing time by one-third per optic not only saves time and money, it also lessens the risk of potential damage to the optics because the automatic process significantly reduces handling.

Outside the Lab, Plummer devotes his time to world travel and soccer; he proudly displays the blood-red flag of the UK’s Manchester United Football Club in his office as prominently as the flag of his native Norway.

He played competitive soccer throughout his youth and college years and also played clarinet in the Texas All-State Band—no small feat in a state legendary for its devotion to band music. And now he has turned his creativity toward woodworking; he designed and hand-built the cabinets in his kitchen and recently has branched out into garden furniture.

Music can do great things for the soul, Plummer acknowledges, but at the end of the day something you make with your hands—like his cabinets with their straight lines and planes, the space-age telescopic DIM in the NIF Target Chamber that he upgraded, or the first-of-a-kind optic polishing machinery he helped develop—remain with him. “That is my biggest source of pride, my crowning achievement so far,” he says.