A Dynamic Journey in HED Science 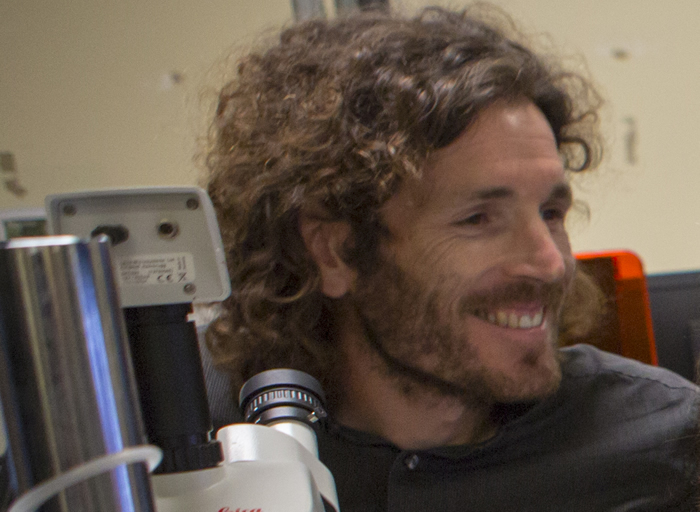 Marius Millot was just a child when scientists at the University of Pennsylvania and Los Alamos National Laboratory predicted the existence of superionic water ice using molecular dynamics simulations. This new phase of water is characterized by the liquid-like diffusion of hydrogen ions within the solid lattice formed by the oxygens. For three decades, superionic ice remained a computational theory because of the challenge in recreating the relevant extreme conditions in the laboratory.

From Toulouse to Livermore

Millot says designing experiments to test a 30-year-old prediction takes both planning and serendipity. The same could be said of his career path. Throughout his childhood and schooling in France, Millot sought to understand everyday phenomena. “I wondered about everything—how water boils, why the sky is blue—and wanted to figure out how it worked,” he says. He studied physics and chemistry in college and decided to pursue a graduate degree.

As a Ph.D. student, Millot investigated semiconductor materials under high pressure and high magnetic fields at the Université Paul Sabatier (Toulouse, France). Commuting between his advisers’ laboratories in France and Spain nourished his love of travel. Upon graduation in 2009, Millot sought postdoctoral research opportunities in the U.S. “You can’t explore everything. Your path may be random,” he recalls thinking at the time. He chose the sunshine of the University of California at Berkeley over the snow of Harvard University. 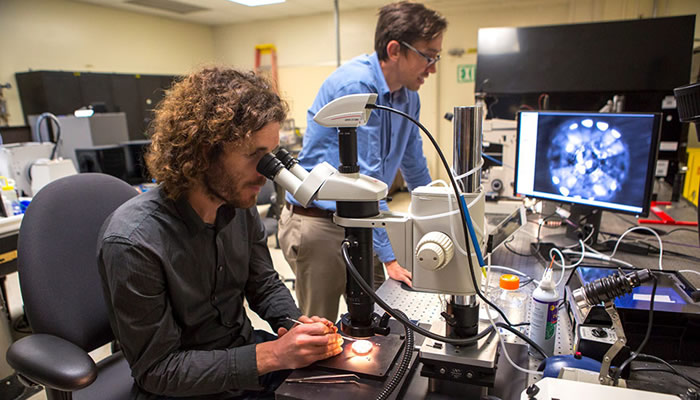 Berkeley’s proximity to Livermore enabled fruitful collaborations with LLNL’s Physical and Life Sciences researchers. By 2013, Millot was fielding shock experiments on planetary constituents such as hydrogen, helium, and silica at LLNL’s Jupiter Laser Facility (JLF) and the Omega Laser Facility at the University of Rochester while becoming familiar with NIF’s capabilities. He joined LLNL’s Physics Division in 2014.

Behind the Scenes of a Breakthrough

Millot emphasizes the team effort behind the superionic ice discovery. The team published their results in February 2018, drawing international attention. Coverage included major U.S. publications such as The New York Times and Astronomy as well as Science & Vie Junior—a French science magazine for teens that Millot read while in middle school.

The superionic ice experiments took place in stages. First, target fabrication began under a microscope in the HEDS Technology Facility, where Millot and his collaborators loaded a microgram of water into a diamond anvil cell assembly with tiny quartz plates, tailored antireflection and polymer coatings and ruby microspheres. The cells were compressed at room temperature to 2.5 gigapascals (about 25,000 atmospheres), which solidified the water. The team then imaged the targets with white-light interferometry before securing them—still under compression—for transport to Rochester. 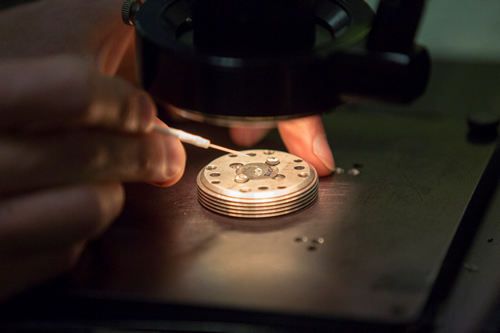 There, Millot worked with the Omega operation crew to conduct the second experimental stage. High-power pulses of laser light launched shock waves that compressed the ice to several million times atmospheric pressure for a few nanoseconds before destroying the targets.

For two years, the team charted the thermodynamic signatures of dozens of targets at differing pressures and temperatures. It took almost as much time to analyze the data before Millot could confirm the theorized anomaly. “As we added more data to our plots, we started to see the picture better,” he explains.

The path to this conclusion was not always smooth, however. The first draft describing these experiments was not accepted for publication. Millot’s analysis of related experiments at NIF exploring the metallization of hydrogen provided a missing link in the data interpretation. “The analysis helped me understand something I missed in the VISAR data,” he says. “I thought it was background noise until I re-analyzed it and found new information that made my case much stronger.” After additional superionic ice experiments, Millot’s team was armed with a complete, solid data set.

Millot enjoys the excitement and challenges of HED research, noting, “We can recreate conditions we never thought possible.” He continues to conduct experiments at Omega and NIF for planetary and stockpile stewardship science, with a focus on inertial confinement fusion research.

Reflecting on his career thus far, Millot has straightforward advice for aspiring scientists: “Do something you like. It needs to be worth your energy.” Although he is busy with hands-on experimental work, Millot still spends considerable time analyzing data.

“Sitting at a computer can feel like a hamster churning in a wheel,” he says, so he goes for a run or rides his bicycle to stimulate creativity. “I am often more creative while running or riding,” he says. “Because scientists are passionate, we think about physics all the time. I find breakthroughs as often in my office as while climbing the hilly roads around the Lab.”