From Wisconsin to Beam Control 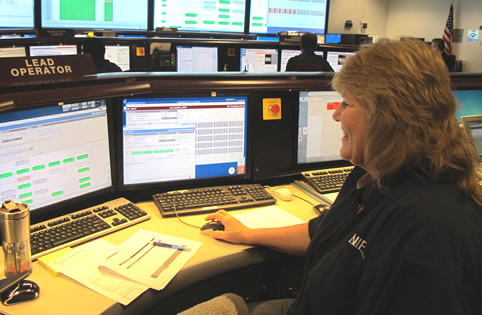 Lisa Burrows at her post in the NIF Control Room.

Growing up in a semi-rural area of Wisconsin, a young Lisa Burrows could not have imagined herself literally calling the shots in the Control Room of the world’s highest-energy laser research facility. But there she is. As one of NIF’s four lead operators, Burrows plays a key role on its operational front line, keeping the laser shots coming and making sure they go well. Now, with years of lead operator experience under her belt, she recently began to transition into a new job as NIF’s Beam Control work center supervisor.

The lead operator is the second in command after the shot director. “We run the shot cycle,” Burrows says, “and keep the facility on pace toward the shot.” A lead operator’s work responsibilities include overseeing the configuration of the facility so that it is ready for the shot, staying ahead of any potential issues, and counting down and pushing the button that starts the shot. In the run-up to the shot, the lead operator communicates with eight subsystems and 15 operators keeping watch over their own bailiwicks in the NIF Control Room.

As the Beam Control work center supervisor, she is responsible for scheduling all of the 12-hour shifts of the alignment operators who make the shots happen, maintaining their training, and seeing that the responsible individuals have work permits authorizing them to carry out their work. In effect, she’s the master scheduler for the staff members who implement shots. In that position, she strives to balance the demands of setting up shots with the need to provide adequate maintenance time to safeguard NIF’s unique equipment. Shifts work on NIF shots from early mornings on Sunday to early Friday, running around the clock, with the remaining two days scheduled for maintenance. 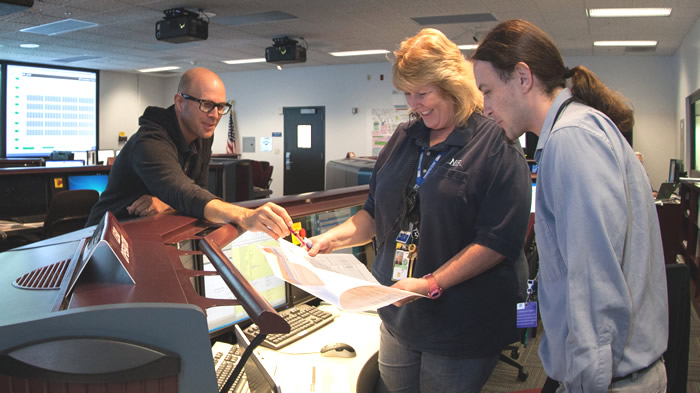 When she was old enough for college, Burrows decided to consider a career in science and technology. Attending the Northcentral Technical College in Wausau, Wisconsin, in the mid-1980s, Burrows enrolled in a two-year program on laser technology.

“At that time, most women or girls who liked science were pushed toward a career in data processing,” she says. Burrows had the chance to take several mini-courses lasting three or four days each to get a taste of different careers. She took three—in data processing, dental hygiene, and laser technology. “I knew after the first few days that I wasn’t interested in data processing,” she says, “and dental hygiene just wasn’t for me. But the laser technology course was fun and exciting. It piqued my interest.” The laser technician program started with 40 students; 25 graduated. Two of them were women.

Toward the end of her program, three LLNL staff members visited her class. They interviewed many of the program’s students, and within days, made job offers to about ten, including Burrows.

She accepted the offer, quit her job, and bought a one-way ticket to California, showing up in Livermore with five suitcases and $500. She wasn’t married at the time, so there was no family to uproot. Still, she says, it was an exciting and scary decision to move across the country to a place where she knew no one.

Burrows worked in the Atomic Vapor Laser Isotope Separation program until 1999, when she left LLNL. She raised her children and worked at part-time jobs until 2008, when her oldest son was a sophomore in high school and college was in his future. A phone call to a Laboratory connection brought her to NIF, where she took a job in Operations working on injection lasers. Several months later, she moved on to lead operator.

A NIF shot requires that tens of thousands of elements work together to generate 192 beams that combine into a single beam focusing energy onto a target the size of a pinhead (see What Goes Into a NIF Shot?). Each and every NIF shot is a valuable scientific resource providing precious data—as long as the beam fires as planned and the diagnostic equipment captures the data.

Subsystem operators work to ensure that everything from the high-voltage systems that charge flash lamps to the Beam Control Systems, the Target Area diagnostics, and the building’s utilities are working within tightly defined functional ranges. A half-degree variation in air temperature could scrub a shot.

As she moves into her new role of Beam Control work center supervisor, Burrows is looking forward to learning her new job and continuing to contribute to NIF’s success. “It’s always exciting, and dynamic,” she says. “Every shot’s a little bit different, and the experimenters do a good job of briefing us on what each shot is all about—it helps give us the motivation to make sure that every shot comes off successfully.”

When she’s not working, Burrows spends time assembling puzzles, doing Sudoku, and taking care of her garden. She and her husband are also getting back into golfing, now that their two boys are grown.

Summing up her job, Burrows says, “There is enough change that it never becomes mundane, and I don’t get complacent. There is always enough happening to keep you on your toes.”