A Laser Focus on Fiber-optic Upgrades 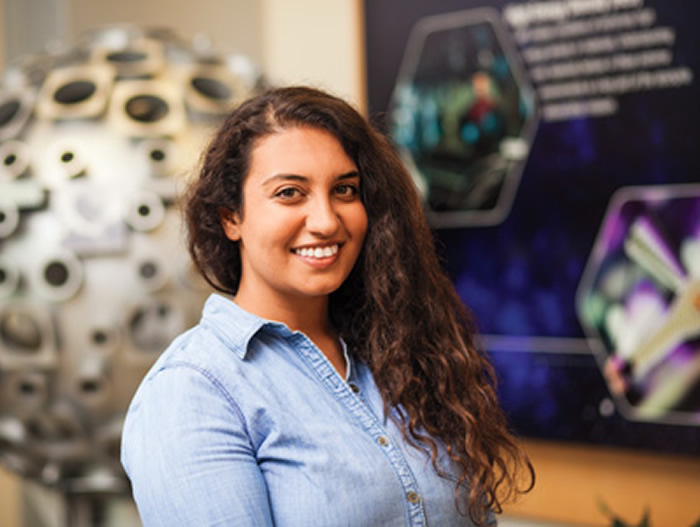 Kiani is a member of NIF’s Fiber Technologies Group, which is developing a prototype laser amplifier with the potential to open new data-carrying capacities in fiber-optic cables, a backbone of the telecommunications networks that connect the world.

“I feel fortunate to be working on this impactful project,” the 31-year-old Kiani says. “I’m eternally grateful that I got to work on this.”

That project is also one of the reasons the Oakland resident gained recognition as one of Diablo magazine’s “40 under 40,” an annual list of the East Bay’s “most influential innovators, philanthropists, artists and entrepreneurs under the age of forty.” Published in the magazine’s September edition, on the list were four other LLNL employees, including NIF & Photon Science physicist Louisa Pickworth.

“I was very excited to have won an award,” Kiani says. “It’s always fun to get recognized for your accomplishments.”

The University of California, Merced, graduate joined the Lab in August 2016 and is the principal investigator for the E-band fiber optic amplifier project, which recently received funding from the Department of Energy (DOE) Office of Technology Transitions and a TechConnect Defense Innovation Award.

The E-band project, which spun out of NIF research into neodymium-doped optical-fiber lasers, seeks to augment existing erbium-doped amplifiers now used to boost signals in fiber optic networks. The Lab amplifier could double data-carrying capacity by adding what is known as the E-band transmission spectrum to the C- and L-bands already in use without replacing installed fiber optic cables.

“The technology we’re talking about has almost no disruption to the infrastructure,” Kiani says.

The group built a prototype E-band fiber-optic amplifier on a tabletop. They plan to take the next step of creating a field-testable model.

Kiani’s other major research project is investigating sources of undesirable background energy in short-pulse fiber amplifiers, which is important for laser-driven particle accelerators and other high energy density (HED) experiments. 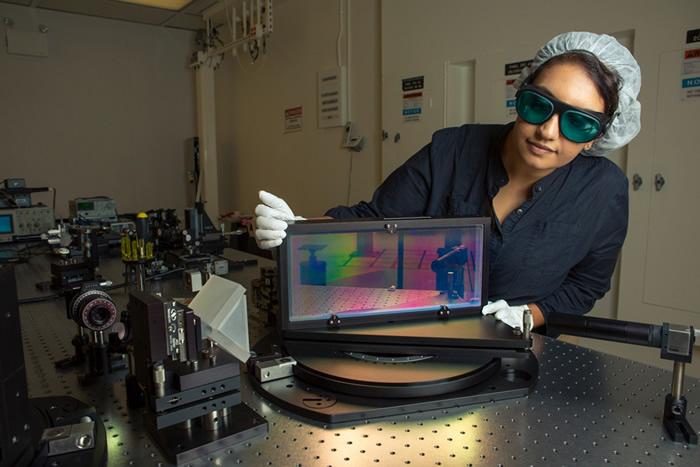 The researchers are trying to learn what raises background energies in chirped-pulse amplifiers, a technology that delays certain optical frequencies in short laser pulses. The technique is used to increase laser energies while avoiding potential damage to the amplification components.

“It’s not well understood why the background (energy) varies in fiber chirped-pulse amplifier systems,” Kiani says. “The raised background can deliver enough energy to induce deleterious effects on the target before the main pulse arrives. The idea behind this research is figuring out how do we, in fiber systems, bring that background as low as we possibly can.”

The research is a collaboration involving LLNL, Lawrence Berkeley National Laboratory, and the University of Michigan. “Our part of the project is fundamentals driven,” she says.

The E-band project, on the other hand, is “very industry driven. I’m excited to be able to work on both of these projects. I like that the Lab is very connected to both academia and industry, especially so in the fiber group. There’s such a diverse portfolio of things we do.”

That’s a factor that drew Kiani to NIF. She was born in Texas and graduated from high school in Houston, although she spent much of her childhood in the North Bay wine country city of Napa.

Science in Her DNA

She seemed destined to follow a scientific path—her mother is a microbiologist and her father is a mechanical engineer. Her father convinced Kiani to enroll in UC Merced in 2005 as part of the school’s inaugural freshman class.

An undergraduate advisor, Assistant Professor Jay Sharping, told her about developing light sources for biological applications, explaining how he was working on trapping cells with light emerging from two optical fibers.

“I really liked the idea creating these tools for clinicians, environmental scientists, and a broad range of users, to have some kind of impact on a lot of different fields,” Kiani says. “And that’s precisely what we do in the fiber group. We make fiber sensors, fiber amplifiers, passive fiber for communications, and specialty fibers for NIF.”

After becoming the first UC Merced student to earn a B.S. in physics, she took a year off from school. She worked for a Napa winery during one harvest season as an enologist’s assistant, performing sugar content monitoring, pH and enzymatic testing, and checking for harmful bacteria. She then worked for a Palo Alto startup that develops quantum-dot technology for mobile phone and laptop screens.

When she returned to Merced as a graduate student, she made a connection through Sharping with NIF Fiber Laser Group Leader Mike Messerly. While attending a conference, she had the chance to tour NIF and met Reggie Drachenberg, at the time a postdoctoral researcher and now an experimental laser physicist.

“I was very fascinated by NIF,” Kiani says. “I hadn’t known about the postdoc programs at the Lab but then I met Reggie Drachenberg, who talked about working at the lab and that sparked my interest in pursuing a postdoc here.”

After earning her PhD in physics, Kiani could have sought a job in the commercial fiber optics industry. Instead, she decided she wanted to work for the Lab and waited until a postdoc job opened.

While her work is challenging, she says, “we’re addressing important problems with both of these projects.”