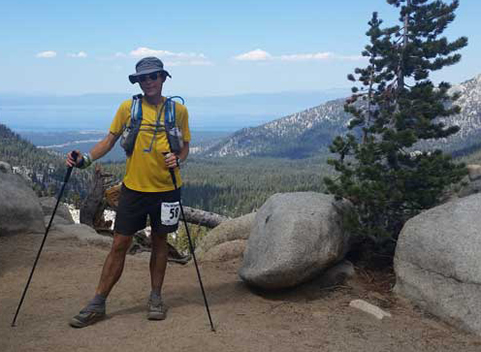 In just under the time it would take to fly twice around the world—85 hours—NIF optomechanical engineer Justin Galbraith ran and hiked more than 200 miles to cross the finish line of the Tahoe 200 Endurance Run.

Fighting blisters on every toe, with temperatures ranging from the 40s to the 80s and sleeping only three hours, Galbraith completed the course that follows the Lake Tahoe Rim Trail along the California-Nevada border and has more than 40,000 feet of elevation gain. For perspective, the peak of Mt. Everest stands at 30,000 feet above sea level. The event does not have stages; each participant has to come up with his or her own strategy to finish within 100 hours.

Galbraith could not have imagined tackling this course 10 years ago. He had graduated from high school weighing more than 300 pounds. He was a freshman in college studying mechanical engineering and physics when one evening he joined a friend who was an amateur boxer for a workout. At that moment, he realized his lifestyle needed to change. 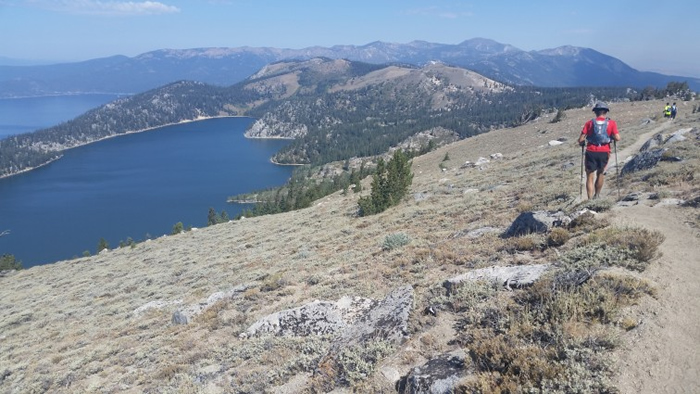 Galbraith hikes along a leg of the Tahoe 200 course.

“I realized how out of shape I was,” he says, “and that there was a whole aspect of my life that I had been neglecting. I really focused on eating well and traditional workouts, dropping over 100 pounds in eight months.

“When I went back for the first day of my sophomore year, I had friends of mine that didn’t even recognize me. Since finding running, especially trail and mountain running, I’ve managed to maintain a constant healthy lifestyle, down over 130 pounds from where I started.” 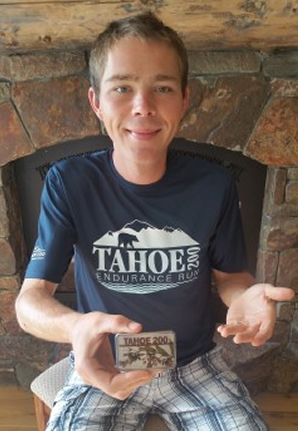 Galbraith holds a customized belt buckle each runner gets on completion of the event. Plants pressed in the buckles were collected along the course.

Over time, Galbraith worked his way up from 26-mile marathons to 50-milers and then to 100-milers, all with the support of friends and family. For the Tahoe 200, he had a crew made up of his parents, who flew in from St. Louis, his wife, and two friends who met him at every rest area to provide food and logistical support. After the 60-mile mark he also was allowed the company of “pacers,” who took turns on different legs for 15 to 20 miles to make sure he was safe and stayed on the trail.

Galbraith and his pacer experienced firsthand what can happen in the mountains.

“A small family of black bears stopped us about 180 miles in,” he says. “A mom and two cubs were 50 yards away staring us down on the trail. They wouldn’t move, and I couldn’t wait because this is a timed event. We were banging our trekking poles, which didn’t work. So I blew on the SOS whistle I had on my backpack a few times and they finally scattered.

“It’s nuts. This is not a track at some high school or something.”

Everything from physical conditioning to bear encounters was meticulously planned and prepared for in the six months leading up to the run. Galbraith ran 80 to 100 miles a week to understand the muscle fatigue he would face and the mental toughness it would take to finish. He used the Failure Modes Effects Analysis performed before large engineering and design projects as a tool to plan his reactions to anything that might go wrong.

His strength and mental toughness helped him get his master’s degree through the Laboratory’s Education Assistance Program, and they continue to help him tackle NIF optical engineering projects. 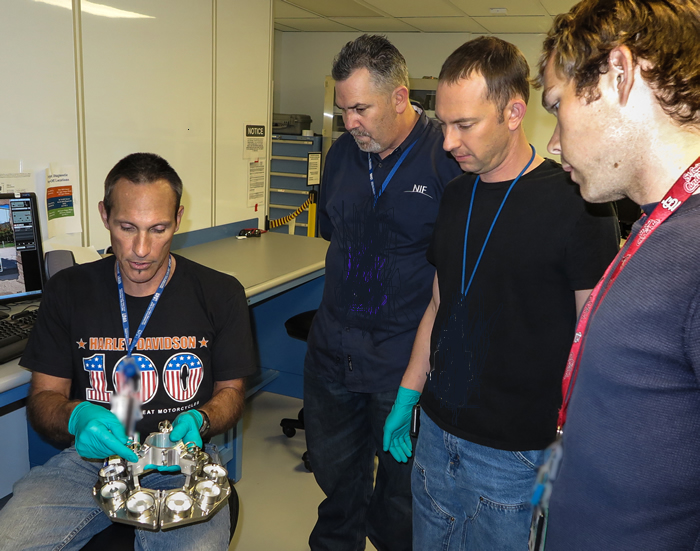 “You just have to apply that tenacity, focus and drive,” he says. “When you get done with something like this, especially with a team and you execute as a team, it gives you confidence. Not to be cliche, but you can accomplish quite a bit if you focus and put your mind to it. Put yourself with capable people, and don’t give up.”