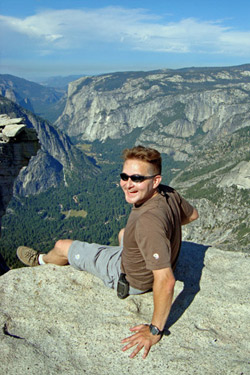 John Heebner at the top of Half Dome in Yosemite.

You grew up in New Jersey, the son of a Peruvian mother and American father. You got your Ph.D. in Optics and M.S. in Optical Engineering in New York, at the University of Rochester. Do you miss the East Coast?
Yes, but coming to Livermore was an easy choice. I was presented the opportunity to work with some of the world’s top minds in lasers and optics and the engineers and technicians who can build anything we dream up. Also, working at a national lab offers the best of both worlds: R&D problems to tackle much as universities do, as well as being able to push performance in areas that industry can’t or doesn’t have the financial incentives to tackle. Plus I love the hills and outdoor activities you can do year round here—mountain biking, skiing, softball, and sailing. I especially like hiking in Yosemite. In 2009, I hiked to the top of Half Dome, a 16-mile round trip trek up 4,800 feet from the valley floor. After that, I was hooked and have since hiked many of the other trails in the national park.

Ed Moses refers to you as “one of the young guns of NIF.” What are you responsible for?
For my first job at NIF from 2003 to 2007, I was responsible for qualifying the 48 Pre Amplifier Modules (PAMs) that now provide most of the gain on the NIF laser. Today I continue to improve these and develop new upgrades to the front-end where the NIF laser beams originate. While this is a key element of NIF, it’s one of many laser components inside the NIF facility that shape and smooth a seed pulse, amplify it more than a quadrillion times, and direct it at a tiny target precisely centered in the target chamber. I’m still in awe of how this monumental undertaking, involving thousands of people, came together.

That sounds challenging.
I often find myself troubleshooting perplexing problems. Treating them like detective work makes the job more fun. I always find that the key is to review your assumptions and ask the right questions. These challenges continue to drive me and keep me here. I can imagine teaching one day in the future, but as for now, I’m keeping up with the challenges of working in this fast-paced environment. Recently I also began serving as a group leader of optical & electronics scientists and technicians. This involves listening to their day-to-day issues, marketing the group’s skills, and representing their voices. It gives me a taste of management. I’ve had many bosses here and have learned from the great ones.

What do you tell your friends and neighbors to help them understand the work you do?
I use an analogy: if NIF is a surround sound audio system, the front-end injection laser system is the iPod delivering the music.

Your book, Optical Microresonators, was published in 2008 and is based on your dissertation. What can you say about the title?
The microresonators refer to rings on a chip 1/10th the diameter of a human hair, built to circulate and intensify light as a means of developing ultrafast optical transistors that could someday be an integral part of the architecture of supercomputers.

You won the “Oscar of Invention,” the R&D Magazine 100 Award, not once but twice.
The first award was for an all-optical streak camera called SLIDER—Serrated Light Illumination for Deflection-Encoded Recording. SLIDER set a record for the world’s fastest light beam deflector and our small team used it to create a novel ultrafast recorder based on photons rather than electrons. With a conventional streak camera, you can have either time resolution or dynamic range. With SLIDER, you can finally have both. The second award was for our larger team that developed a system of programmable spatial shaper devices called LEOPARD—Laser Energy Optimization by Precision Adjustments to the Radiant Distribution—which was installed in the NIF Pre-Amplifier Modules in 2010. These devices enable obscurations to be placed on demand on the NIF beam profiles to shadow a small number of flaws on the final optics from potentially damaging laser fluences.

Even though you earned your second-degree black belt in Tae Kwon Do, I understand you’re not the boss in your household.
That’s true—my 12 pound, 14-year-old Jack Russell Terrier, Jack, thinks he’s the boss, especially if we’re around other dogs. I’ve had him since he was 2, and yes, he came with the name. Jack and I frequently hike the local state parks, including Brushy Peak, Pleasanton Ridge, and Lake Chabot. His spunky attitude motivates me not to be intimidated by the “big dogs.”