Keeping an Eye on Laser Safety 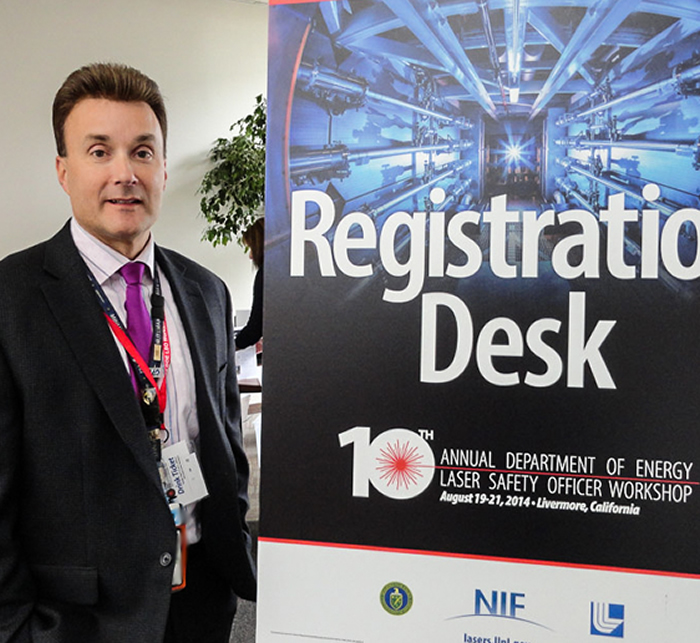 When opportunity knocks, Jamie King jumps up to answer the door.

King has parlayed a number of timely job offers into a career at what he considers the “center of the (laser) universe”: serving as laser safety officer (LSO) for NIF, and later for all of LLNL.

Overseeing laser safety at the world’s largest and highest-energy laser facility has required dedicated effort to meet the expectations created by the Lab’s historic role at the forefront of high-energy laser development. “You’ve got to go the extra step,” King says. “Whether you’re putting on a conference, or the work you’re putting out, it’s always got to be world-class. The Lab’s always challenging you to challenge yourself.

“One thing that makes my job easy,” he says, “is the culture that’s been read into the workforce. I’ve been here (at NIF) for nine years, and we just maintain a very high level of safety consciousness in our people. They’ll call me up, and they’ve already taken care of most problems before I get there.” 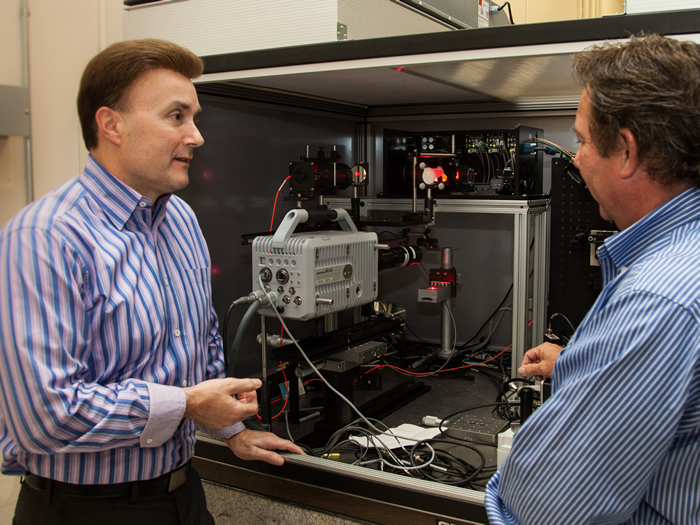 King was raised in a small mining town on the upper peninsula of Michigan, where the winter snow is often so deep that it covers the front door of many homes. “I had three sisters, so I got to shovel,” King says. “School would get cancelled and I knew my whole day was going to be spent shoveling.”

When he wasn’t coping with 15-foot snowdrifts, King satisfied his native curiosity by scavenging old TVs and other gadgets and taking them apart to see how they worked. “I almost burned the house down a few times,” he says. “I found out what 110 volts felt like—I was like six years old.”

His early dreams of becoming a fighter pilot and astronaut were crushed by less-than-perfect eyesight, so King developed an interest in telescopes and optics. But when he decided to join the Navy after high school, the recruiters steered him toward the Navy’s nuclear power program. He served for six years as a nuclear machinist on the aircraft carrier Enterprise, which housed eight nuclear reactors—the world’s largest nuclear power complex.

After a brief stint doing maintenance work at the SLAC National Accelerator Laboratory in Menlo Park, King answered an ad for a position in radiation health physics and radiation safety at NASA’s Ames Research Center in Mountain View. On his first day at work, during a July heat wave in 1991, he had to don a respirator, go into a cramped and sweaty bunker, and pack up dead rats that had been sacrificed in biotracer experiments. “I’m thinking, ‘What did I get myself into?’” King says.

Fortunately for King, the unit’s supervisor, who was also the laser safety officer, took another position and asked King if he’d like to take over as LSO. “And I asked, ‘Well, what does that entail?’” King says. “And he says, ‘Walking around nice clean laboratories, looking at laser operations, you know air-conditioned this and that.’ And I thought, ‘Wow, that sounds a lot better than what I was doing.’”

At the time lasers were becoming increasingly popular laboratory tools, so King decided to “jump at that opportunity. At NASA, if you had a good idea, they basically said, ‘Hey, go for it, but you know, it’s on you.’ So I learned everything I could about lasers. We had the big wind tunnels there that used lasers, and we put lasers on aircraft looking at the ozone layer, looking at pollution in the atmosphere.

“I got to work on a couple of shuttle missions,” he says. “One of them was where they did the biotracers in the animals in space. At that time it was the longest mission ever for a shuttle, it was mission number STS58, and we got to work with the astronauts. I almost got to go on the shuttle. They told me I was going to get to go on it, but at the last minute they just decided they didn’t want us to go on board.”

After nine years at NASA, the contractor King worked for lost the NASA contract, and his employer asked if he’d be interested in a job at Sandia National Laboratories in Livermore, across the street from LLNL. “At the time I was living in Tracy, so it was a pretty long commute to Mountain View,” he says. “Give me a pay raise and a shorter travel to work? So I went to work over there for six years.”

King visited LLNL and toured the Nova Laser, NIF’s predecessor, as a member of the Bay Area Laser Safety Officers group. “I was just blown away by the safety systems, the interlocks and everything,” he says. “Outside of DOE, it’s really hard to get money to really implement safety like it should be. And I thought, ‘Wow, it would be really cool to be the laser safety officer over there.’ So I popped it in the back of my mind and never thought about it.”

But one day in 2006 Jeff Wisoff, then the principal deputy principal associate director for NIF & Photon Science, called and asked if King would be interested in interviewing for the LSO position at NIF, replacing Ken Barat. “I was pretty happy where I was,” King says, “but I’m not one to turn down the opportunity for an interview. I hadn’t been to see the NIF—when we looked at Nova NIF was basically a big mud hole—and so I came over and interviewed, and they rolled the red carpet out, everything was first class. The last thing I did was to take a tour of NIF, which was still under construction, and I was just blown away” by the scope of the project. “I said, ‘Yeah, when can I start?’” 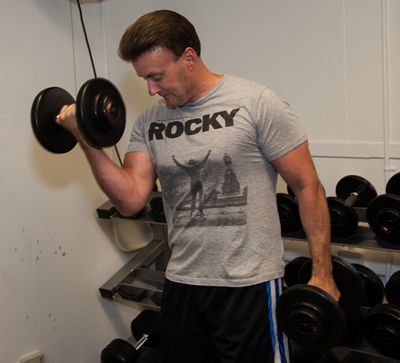 King keeps his energy up with regular workouts at the LLNL exercise facility. Credit: James Pryatel

After a few years as LSO for NIF, the LSO position for LLNL came open and King was asked if he would take over the Laboratory’s laser safety program. After agreeing to give up the NIF & Photon Science Emergency Management Program to focus exclusively on laser safety, the job was his.

King had been publishing a laser safety newsletter at Sandia, and was asked to continue the newsletter for NIF ( click here to see the latest issue (PDF)). “Once I took over for the Laboratory I increased it from a two-page to a four-page, and I put it out about once every quarter,” he says. “It really helps that instead of people getting refresher training every three years or so, you keep (safety) in front of them all the time. We’ve gotten really good response and now I have a distribution list of over 2,500 people. It’s used by universities, DOE labs, over in England and France, it pops up everywhere. That’s the one thing, the little piece, that I’ve added to laser safety.”

King also is active in the laser safety subgroup of DOE’s Energy Facility Contractors Group (EFCOG). He helps organize and gives presentations at DOE Laser Safety Officers Workshops, the first of which was organized at Livermore by Ken Barat in 2004, as well as at international conferences. And in his spare time he leads public tours of the facility.

“I get to watch people light up” when they tour NIF, he says. “And everybody asks me the same question, ‘How do you get a job here?’ And they comment, ‘This place is awesome.’ It makes you appreciate your job a little bit better to see people from the outside let you know how lucky you actually are. I give tours to kids, to get them interested in science, and to let the adults out there who are taxpayers, let them know their money’s well spent.”

King attributes his success to good fortune, preparation, and the willingness to take chances. “I heard it from my mother: Never let an opportunity go by, never sell yourself short, things like that that I try to tell my kids. If you put a bit more effort out, things are going to go so good for you. So going through life I’ve always looked at opportunities—if something looked like it was going to be a great opportunity…jump into it. You can always step out if it’s something that doesn’t work out. If you don’t take it, you’ll never know what happened.”

King has a daughter studying biopsychology and computer science at UC Santa Barbara and a son in junior college. He spends his off-duty time working out in the Lab’s fitness center, designing and building woodworking projects for his home, and tinkering with old jukeboxes and his vintage 1969 Pontiac Firebird convertible in his lift-equipped garage.

Of his jobs at NIF and LLNL, King says, “I don’t see myself leaving here. Like I’ve always heard since I’ve been here, lasers are the future, and they’re going to be around for as long as my career lasts.”