It was the Halloween to beat, with almost 800 people attending the community-wide event for special needs children that NIF’s David Roebel-Lancaster threw last month in honor of his It was the 8-year-old son, Balian.

Balian came as Batman. Roebel-Lancaster and his wife, Ria Lancaster, both appeared as their young caped crusader’s sidekick, Robin. 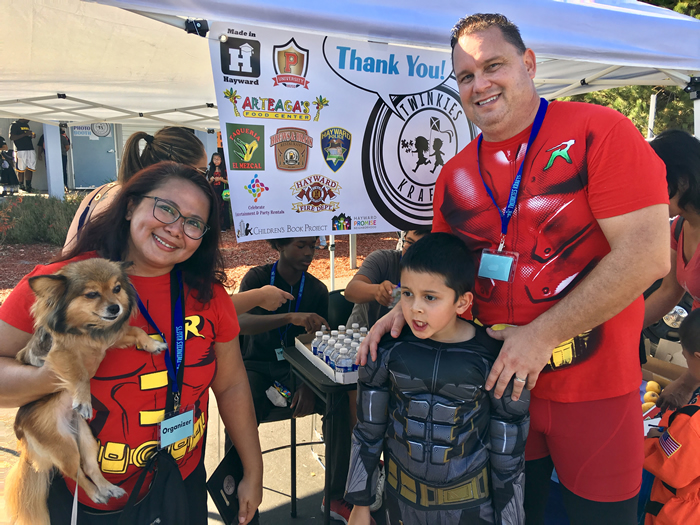 The Roebel-Lancaster family prepares for “Trunk or Treat.”

For Roebel-Lancaster, the big Halloween event began two years ago simply as a way to create a happy place for special needs children and their families to enjoy.

“As a parent of a child with autism,” he said, “we discovered that even something simple as going out to eat was not a simple act, without having people judging you or your parenting, or have people stare or worry about their perception of what ‘normal’ is.”

Roebel-Lancaster, who works as a duty engineer in the NIF Control Room, wanted his child to be able enjoy a sense of community growing up. So he and his wife decided to create the kind of “Golden Rule of quality” events that they personally sought—an event not just focused on serving youths with autism, but reaching out to other children facing other developmental challenges as well.

They started building on their own extensive social media contacts—her Instagram site alone, iHellaHeartHayward, has nearly 4,000 followers. Their grassroots following has grown so extensive that their second annual Halloween-themed “Trunk or Treat” event for special needs children in Hayward drew a record crowd this year.

They created a California-style Halloween. Instead of kids traipsing to far-flung houses, to make it easier for those with limited mobility they gathered cars in a central parking lot and decorated the vehicles in wild ways with such themes as skeletons, goblins, and popular culture characters from Star Wars, the Minions, and the Corpse Bride. The youngsters trick-or-treated out of the back hatches under the supervision of pre-approved volunteers. 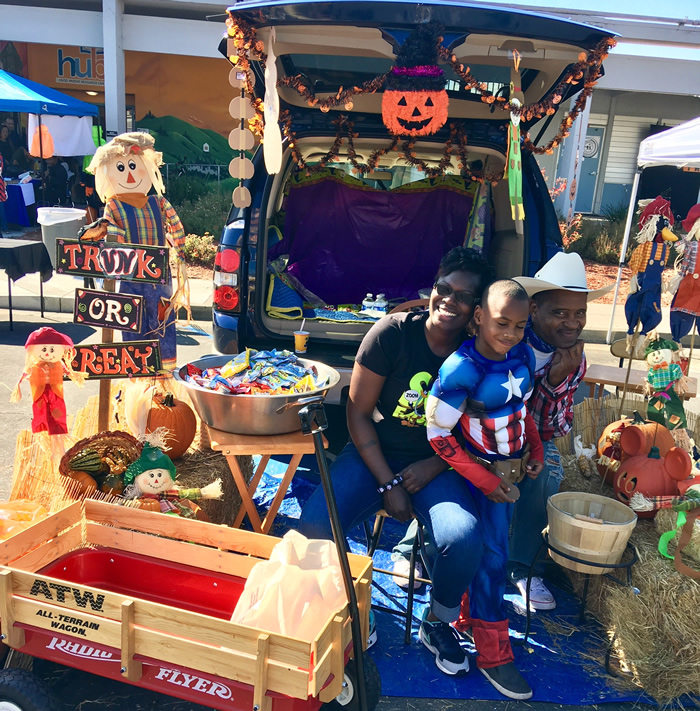 Marcus Epps as Captain America, along with his parents Shareshee Williams and Kirk Epps, were among the hundreds of participants and volunteers at last month’s “Trunk or Treat” Halloween for special needs children. Credit: Ria Lancaster

There were festive activities like food trucks, games, and face painting. Local firefighters brought their shiny red trucks for the kids to clamber on.

Through his growing network, Roebel-Lancaster found a place that donates books to nonprofits. They gave away more than 400 children’s books at the event, he was proud to say: “Good ones too, like Where the Wild Things Are and Curious George. We had teachers and librarians who helped us, and we were able to let the kids choose their own books.”

Roebel-Lancaster’s work at NIF involves overseeing control systems. He is one of a five-person team in Integrated Control Systems, working directly in the Control Room, which operates virtually around the clock.

“I like troubleshooting,” he said of his work at NIF. “I like this job because it requires you to have to think on your feet.”

A Fascination for LLNL

Roebel-Lancaster previously worked as a production manager in the newspaper business, troubleshooting as a pre-press operator for the Alameda Newspaper Group. He also worked as a production manager for a startup new-media technology company before going back to school to pursue his B.S. degree in computer engineering technology. He grew up in Livermore and had relatives who worked at LLNL, so he always had a fascination for the Lab. When a friend went to work for NIF and told him about how cool the world’s most powerful laser was, he decided to apply.

“It’s been really interesting,” he said of his second career in the technology field. “When I come through the gate every morning, I am always reminded how lucky I am that not everybody gets to do this. And every time a shot goes off, I am always impressed with the skills it takes to get everything aligned exactly right every time.”

He applies his troubleshooting skills to his family’s event planning as well, learning how to juggle and network. The couple tries to keep expenses for storage, rentals, and out-of-pocket costs under $2,000 per event. Donations to their nonprofit organization help defray expenses.

Roebel-Lancaster doesn’t spend much time wondering why people seem motivated to help pitch in for their two community events, at Halloween and again at Easter. “The special needs strikes a nerve; I’m not sure why, but it’s much appreciated,” he said. “I meet people and they want to get involved. It’s as simple as that, somehow. I’m glad that people care.” 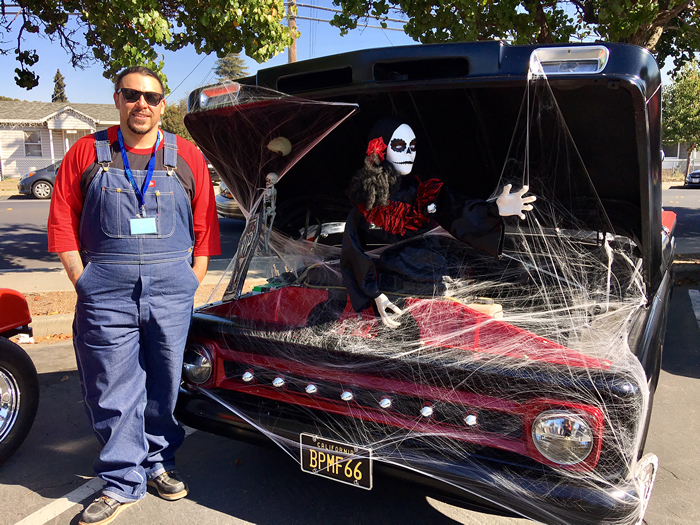 Bringing the spooky to the Halloween event is volunteer Luis Colindres Jr. from BayPolar, a motorcycle and classic car club involved in Hayward-area community events, including donating backpacks and school supplies for kids in need. Credit: Ria Lancaster

The couple explains their motivation for these events on their social media pages: “I’ve always wanted to create a place where special needs children, like Balian, can go out and participate in community events,” they say; “where all the kids can just have fun and express their unique selves, without the worry of inquisitive glances and rude comments simply because they are not perceived as ‘normal’; being able to provide an event and place where being ‘different’ is totally O.K.”

At the Halloween event, the hosts were literally superheroes, drawing more than 200 attendees more than their 2016 attendance, according to registered attendance alone. And they plan to keep the momentum going in the spring with their second Easter event.

Their mission is to give the kids some fun, said Roebel-Lancaster, but he hopes it goes deeper. “Spreading awareness is great,” he said, “but what the kids really need is acceptance.”