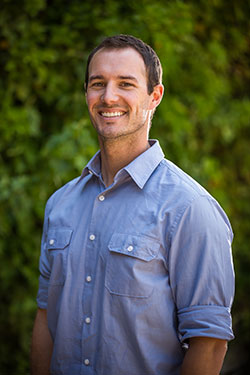 Channing is an unusual name.
I share my name with my father and grandfather. My great grandfather had a different first name, but his father was also Channing, so the name has been in our family for many generations.

What prompted you to apply to Livermore’s post-doc program to work at the National Ignition Facility?
While working on my PhD in Applied Physics at the University of Michigan, I came to Livermore in 2010 as a summer intern to work for Bruce Remington. I learned a lot about the Lab, and I thought I’d be happy working here. My thesis advisor at Michigan was Paul Drake. Paul worked at Livermore for many years and has longstanding ties with the Lab. I was part of the Michigan team that conducted some of the first experiments on NIF by external users later in 2010. Of course, we pre-qualified our NIF experiments with many shots on the OMEGA laser at the University of Rochester.

What was the focus of those first NIF user experiments?
We were studying Rayleigh-Taylor instability. Astrophysicists believe RT instability is a key dynamic associated with a supernova explosion, where we see material from the core pushed outside of the envelope of stellar material. RT instability also plays a role in unwanted mixing of fusion fuel in ignition experiments. Our group performed two experiments on NIF, and I published a paper based on one of them.

Tell us about Bruce’s materials strength campaign.
We’re using NIF to look at how material strength changes as you go through different solid-to-solid transitions. If you push on a material hard enough, you can induce changes in the material’s lattice structure, which in turn alters the material’s strength. Our work is important for stockpile stewardship, but there are other applications as well. Iron, one of the metals we’re investigating, makes up the bulk of the Earth’s core, and it’s under enormous pressure. When we measure with a seismometer an earthquake that takes place on the other side of the planet, the signal travels through the Earth’s core as well as its crust. To understand seismic data, we need to understand the strength of iron.

You’re also on a team with LLNL physicist Hye-Sook Park.
Yes. We’re investigating collisionless shocks, which are found throughout the universe when high-velocity plasmas pass through each other. Collisionless shocks can form enormous magnetic fields. We’re conducting experiments on OMEGA and preparing for an experiment on NIF. Our experiments generate huge amounts of data, so I’ve been writing code to analyze the data.

What’s the verdict so far on working at NIF?
I haven’t been here very long, but working at Livermore is a wonderful experience. If you are interested in high-energy-density physics this is the place.

Are you planning to make the Bay Area your permanent home?
Yes. My fiancée, who also got her PhD from the University of Michigan, and I bought a home in Oakland. It’s an older home, and we’re busy fixing it up.

What do you do for fun?
I enjoy building and refurbishing old bicycles, particularly steel frames. But I guess I’d have to say my main hobby is travelling. In 2004 I spent the year on an around-the-world trip, working and traveling from April to November. I’ve visited Cyprus, Israel, Jordan, Egypt, Thailand, Australia, New Zealand, Fiji, Panama, Indonesia, Malaysia, and Singapore, as well as to most of Europe. I’ve also worked in research centers in Italy, Israel, and Switzerland. Next, I’m hoping to get to India and Nepal.

I understand you also had a two-week “vacation” in Antarctica.
In November of 2011, I flew to Antarctica—the west Antarctic ice sheet—to repair a magnetometer that had been fielded by the University of Michigan and UCLA. The instrument is part of the South American Meridional B-field Array project. The project is funded by the National Science Foundation and uses a string of magnetometers to measure electrical currents in the atmosphere. They were looking for someone with an electronics background who doesn’t mind the cold. I was busy writing my dissertation, but Paul Drake gave me the OK. I spent two weeks in a tent on the ice during the Antarctic summer. It was very beautiful.