Powering Lasers Around the World 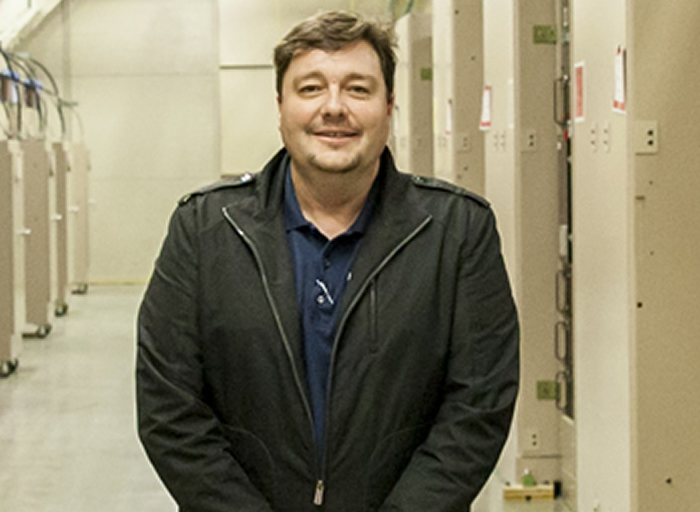 One day, at around the age of seven, Bruno Le Galloudec gazed at the handiwork of a repairman and listened to him explain the main functions of the exposed components at the back of his family’s TV. This enlightening encounter left him wondering just how the electronics worked together to produce the images he enjoyed seeing on the screen. “For a while, I wanted to be a TV repairman,” Le Galloudec recalls. “I started taking stuff apart.”

Little did that youngster know that the focused electron beams streaming from the TV’s guts would begin to illuminate the way to a career filled with many of the biggest beams around. Only these beams were made of photons.

In 1991, after earning his electrical engineering degree, Le Galloudec was hired by inertial confinement fusion pioneer Edouard Fabre to work on pulsed power systems and diagnostics for high-energy lasers at the Laboratory for the Use of Intense Lasers (LULI), which is a member of France’s civilian national laboratory system. As Le Galloudec learned about fusion, he’d hear about the work of colleagues going back and forth to Livermore to help develop NIF. “I had no idea that one day I would end up working there,” he says. “The first time I came to the Lab was in 1997, but I was a visitor.”

Le Galloudec started working in the United States in 1998, joining a handful of people tasked with building from scratch the Nevada Terawatt Facility (NTF) at the University of Nevada, Reno. To fabricate NTF’s 50-terawatt laser, he collaborated with LLNL and used parts from the Lab’s decommissioned Nova laser, NIF’s predecessor. After becoming the chief engineer and spending 13 years at NTF, Le Galloudec crossed another border—a state border this time.

“When I came here in 2011, there were less than 100 shots per year,” he says. “But NIF was starting to really ramp up the number of shots.” Thanks to many efficiency improvements, NIF’s lasers currently fire at the rate of more than 400 shots a year. 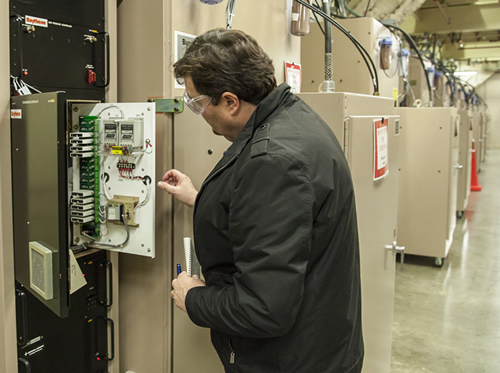 Now the NIF Pulsed Power Group leader and lead engineer of the facility’s Power Conditioning System (PCS), Le Galloudec and his team help ensure, when NIF readies for a shot, that the 192 converging beams impact the target with maximum requested energy. To raise the initial nanojoule (billionths of a joule) laser beam from the master oscillator to the combined final energy of four million joules of infrared light, three pulsed power systems interact to perform the amplification.

“For the pulsed power system,” Le Galloudec says, “we work from seconds to nanoseconds, from milliamps to mega amps, and from millivolts to kilovolts. So, our systems cover a great spectrum of time and power.”

Each of the three pulsed power systems must always be ready to work without fail: the power conditioning units (PCU) providing the electrical boost for the preamplification module (PAM); the PCS modules running 192 sets of power amplifiers and main amplifiers; and the 48 plasma electrode Pockels cells (PEPCs) acting as optical switches that control the paths of the 192 beams during amplification.

“We charge the laser very early in the process,” Le Galloudec explains. “It takes 52 seconds to charge the PCS modules. We store the energy for a very long time, and then we release this energy very fast to form the pulse.”

It may sound like 52 seconds is not a “very long time.” But this is super-slow motion compared to how quickly everything else happens in the laser world. In 450 microseconds, the PCS delivers two terawatts (trillion watts) of electrical power to the 7,680 giant flashlamps that drive the power and main amplifiers—equivalent to switching on 20 billion 100-watt light bulbs over that same duration.

“During these 450 microseconds, we have a lot of time for a 20-nanosecond laser pulse to move back and forth,” he says. “The beam travels at the speed of light; the PEPCs must operate in the nanosecond (billionths of a second) range because they have to switch very fast to trap and redirect the laser.”

A major challenge with the pulse power systems is that they activate in the last minute. When the button to start charging the capacitor banks is pushed, it means people have been working for hours preparing the target and diagnostics. “We are dealing with a lot of high-voltage,” says Le Galloudec. “Because it requires the facility to be swept (cleared of workers), I cannot easily say, ‘Let me test this power supply or that capacitor bank.’”

For the PCS, an 11-ton high-voltage module containing hundreds of components is required for each of the 192 beams. “My job is to always think: What can go wrong? What can we catch before it happens?” he says. “For example, there is always electrical arcing somewhere. The system is so big that you’re not going to be able to find it until it becomes a problem. So, we look at data—the way that the system is aging and performing—and act preventively.”

Construction of NIF began more than 30 years ago. Many of the parts used to build the pulsed power system are not easily replaceable because they are no longer available off the shelf. In these instances, Le Galloudec must sometimes turn to upgrades to ensure the power stays on. “To keep NIF running over its lifespan, we need to think 20 to 25 years more ahead,” he says.

Thinking ahead, operating under extreme conditions, and ensuring critical equipment performs as necessary describes not just Le Galloudec’s involvement with NIF but also his favorite pastime. 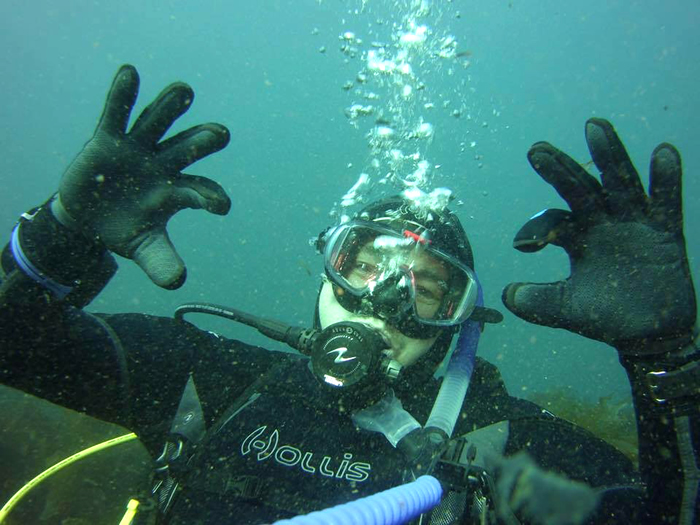 Thinking ahead is essential for dive master Le Galloudec, both at work and under water.

“I’ve been scuba diving since I was a kid in France but got certified in the U.S.,” he says. “Now I’m a dive master and working on becoming an instructor. It is not natural to breathe underwater, and I dive in cold water a lot in Monterey. Things can go wrong. You must put safety first. If something happens when you’re 100 feet down, you better have an escape plan. Teaching the physiology and physics of diving keeps important things fresh in your mind. It makes you a safer diver.”

The idea of teaching also returns Le Galloudec to dry land. As the demands on NIF continue to expand, he enjoys nurturing the new wave of engineers who will help ensure NIF is charged, fully powered, and beaming with photons.